The ‘It’ Girl L.A. Stylist You Don’t Know: Veneda Carter

Veneda Carter isn’t your typical stylist. She’s so low key the industry has yet to realize that the Danish-born creative, who’s based in Los Angeles, dresses one of the world’s most photographed women, Kim Kardashian West, and works for Kanye West at Yeezy.

Carter wants to keep it that way. Even on her Instagram, with 127,000 followers, there are very few photos of Kardashian West, and they’re untagged.

But there are clues on the Internet, images and posts elsewhere. A Reddit item lists Carter among those working with West in Atlanta, where he was born and has reportedly been spending his creative time lately. There’s also a piece by a foreign publication dedicated to an Instagram story that Kardashian West shared this year featuring a photograph of 28-year-old Carter, captioned, “Happy bday to the coolest girl i know.”

The reason for our video call is to chat about Carter’s first fashion collaboration, a collection of fine jewelry with Fie Isolde, a namesake label that’s also L.A.-based and headed by a Danish designer.

“Sorry, I just got out of the shower,” says Carter, barefaced with a towel around her head. She’s home, which is Hollywood these days. 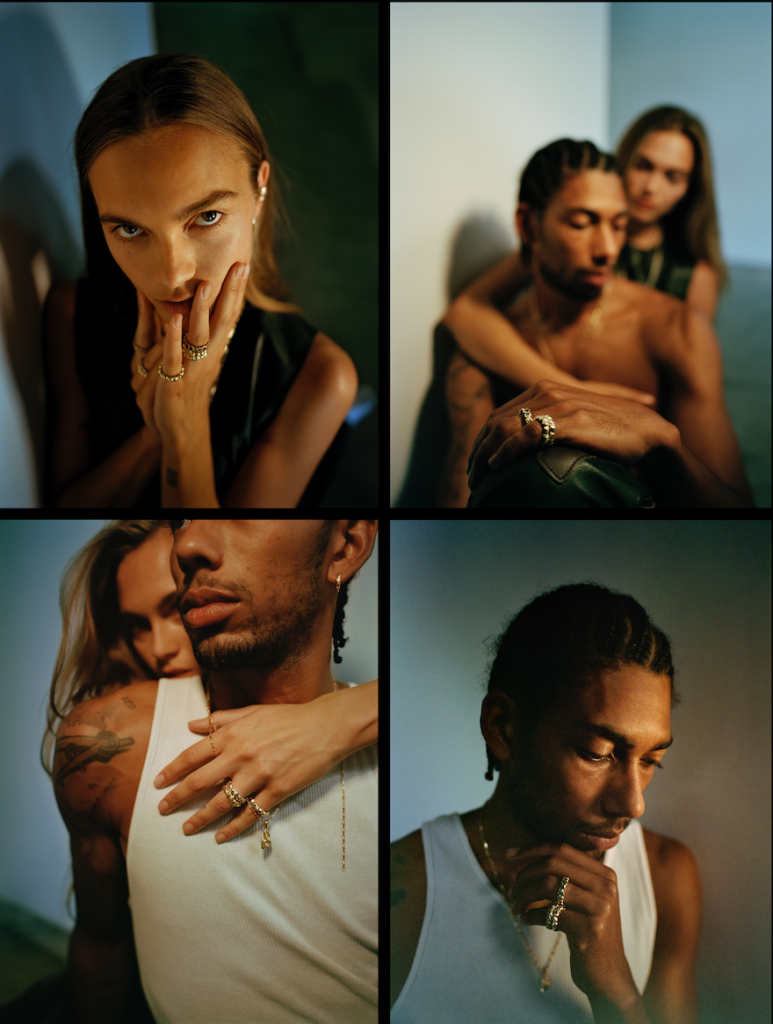 Carter left Copenhagen for New York City at the age of 19 to model, which she did for 15 years. She traveled for the job, also lived in Berlin, and made a decent living, she says, but it made her anxious and unhappy. She fell into styling after moving to L.A.

“It’s like creating art, almost,” she says of the industry. “It’s way more complicated than people think it is, just putting a nice outfit together. It’s about colors, proportions, tailoring.”

When asked about influences, she doesn’t reference names or mention designers. She emphasizes her love of exploring colors and proportions.

“I think it’s maybe my sensibility…It’s so hard for me to answer,” she says about her following. “Honestly, to be 100 percent honest, I don’t know. I know I’m doing something, but I cannot put into words what it is. I’m trying to figure it out.”

She does mention what others often tell her: She creates masculine looks that are yet feminine and sexy. Music plays a role, she says.

“I’ve always been very influenced by rap and hip-hop,” she adds. Her older brother introduced her to the genre as a kid. “The Eighties and Nineties, early 2000s, that whole era. Growing up with him and him listening and watching music videos, watching interviews with rappers and artists, that 100 percent has given me some of the biggest influence and inspiration….African-American culture is a big inspiration for me, too. I don’t know. I just feel like everything they do is just so much cooler than white people.”

She laughs, then in a more serious tone says it’s important for her to showcase “the beauty of African-American culture” in her work and how much she values it in her life. “As a white girl…I’m always voicing my inspiration for it and where I got my inspiration from.”

She brings up the topic of cultural appropriation, saying she’s had some negative comments on her Instagram, though her husband, who’s Black, has helped her: “I’ve had so many conversations with my husband because I try not to have it bug me, but also not being from here and not understanding maybe 100 percent, he’s taught me so much.” 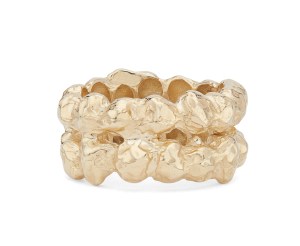 One of the rings from the Fie Isolde jewelry launch was inspired by their wedding bands, she says. She also references her family’s Polish history, pulling from her mother and grandmother’s antique gold pieces.

“I always was known for wearing a lot of jewelry,” she says. “I always have so many chains on me, always so much gold.”

She met Isolde through a mutual Danish friend. “I saw her pieces in person, and I kept thinking about her and the jewelry,” she says of the designer.

The two collaborated on a line, out today exclusively on Moda Operandi (after first selling out on the Fie Isolde site), that features Isolde’s signature style of showcasing the organic, rawness of gold combined with Carter’s “cool, street” style, as Isolde puts it. Isolde, whose pieces are handmade in L.A., works with organizations like the Downtown Women’s Center and Union Rescue Mission to offer homeless women work. That, too, attracted Carter. Together, they created a limited release of 12, 14-karat gold jewelry pieces, including earrings, necklaces and rings. They range in price from $1,230 to $2,845.

“It’s jewelry that I was missing, that I didn’t have, that I wanted,” Carter says. 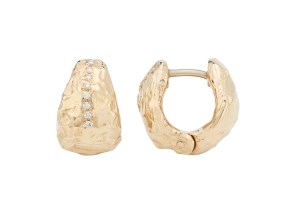 For the campaign imagery, which she models herself, she worked with Dexter Navy, a Grammy-nominated filmmaker and photographer known for his music videos with A$AP Rocky.

“I’ve always been a big fan of his work and wanted to work with him,” she says of Navy, a friend she’s known for 10 years. “And this came up and was my first independent project. [I thought], ‘he needs to shoot this.’”

WATCH: How Catbird Became a De Facto Jeweler for Millennials