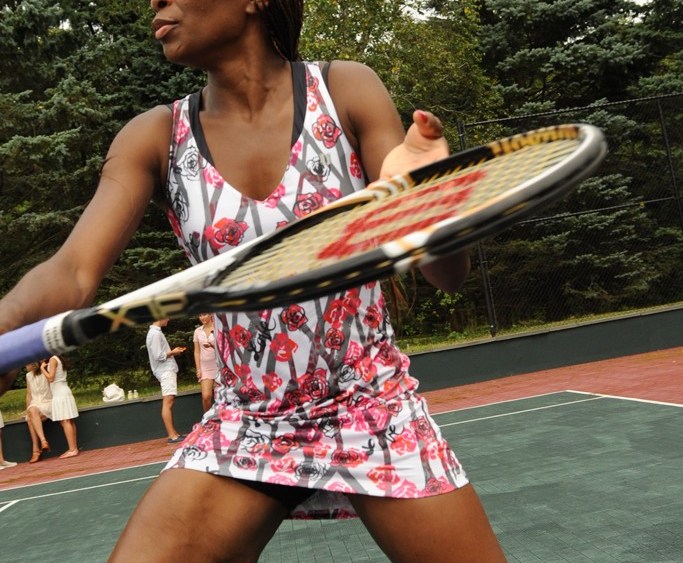 Venus Williams held court, literally, at a tennis party at the Southampton, N.Y., home of Rita Schrager on Saturday to help relaunch her EleVen by Venus Williams line of tennis apparel. Fresh from a gold-medal win in women’s doubles at the London Olympics, Williams hit balls with Alex Kuczynski, Adelina Wong Ettelson and publicist Lara Shriftman’s four-year-old son, Lucas Bacardi Shriftman. Venus gave backhand tips to Dylan Lauren, an ardent player who was captain of the girls’ team at The Dalton School.

“What she really said was to keep your eye on the ball, which is so simple and such a metaphor for life,” said Lauren, who is opening new Dylan’s Candy Bar shops in Los Angeles later this month and Miami in October. The entire Lauren clan plays tennis, but she declined to divulge the best player in the family, before adding, “My dad is really good, you’d be surprised. We’re pretty competitive, we kind of like to kill the ball.”

The tennis star was still on a high from her Olympic win — and rubbing elbows with First Lady Michelle Obama in London. “Obviously we talked about fashion. She had on a Tracy Reese dress that I absolutely loved. She has a great sense of style that is really her own,” said Williams, who is relaunching EleVen this year with California manufacturer Ugo Capasso. The line first launched in 2007 with the now-defunct Steve & Barry’s chain.

Only vegan snacks were served at the event, in a nod to the plant-based diet Williams has adopted following her diagnosis with Sjörgen’s syndrome, which sidelined her from competing last year. However, she’s bounced back physically and is pumped for the U.S. Open, which begins Aug. 27.

“I feel the best I’ve felt in a year and the Olympics was the perfect time to feel good — thank you God,” she exclaimed.

Universal Studios president Ron Meyer later dropped in with pal Sandy Gallin to pay his respects to Williams. “I’m visiting friends for the weekend,” explained Meyer, who is usually in Malibu, Calif., during the summer. His take on the summer blockbuster season? “People are going to the movies in spite of the horrible tragedy in Colorado, which certainly should give us pause — more about what’s going on in the world today than in the movie business,” observed Meyer, pointing to the success of his own studio’s “Ted” and “The Bourne Legacy,” the weekend’s top performer at the box office. So while tennis is fun, “I don’t think there’s a better way to spend an afternoon or evening than at the movies,” he added.