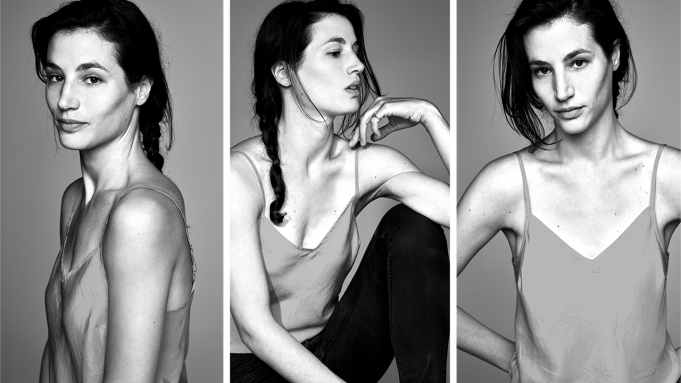 Americans will just be getting to know French actress Elisa Lasowski when television’s latest historical bodice-ripper, “Versailles” debuts on Ovation Oct. 1, followed by Netflix in December. She portrays Maria Teresa, or Marie-Therese, first wife of “The Sun King” Louis XIV in the series, which has already played out Season One in France and the U.K. and is headed into its third season of production.

Those keeping abreast of their period television series may already have caught wind of the series’ racy portrayal of the royal court, but Lasowski, 29, shrugs it off. She is someone, after all, who made her acting debut in David Cronenberg’s “Eastern Promises” as a prostitute, and who has also appeared as such on “Game of Thrones.”

“Some historians who have seen it have said it’s so much tamer than what life would have really been like back then,” she said. “Also, sex is part of life. I guess that’s why it gets portrayed in entertainment, because it’s a reflection of what human beings are about.” It’s also highly entertaining, and brings in good ratings, which she duly notes. “It comes out of a trend in TV that has somehow moved in that direction. In that sense it’s quite a contemporary show, a show of its time.”

A brief historical recap of the titular French castle: The former hunting lodge of Louis XIII was transformed by his son Louis XIV into the royal seat of power, an endeavor not without its struggles, including a filial rivalry, and the many machinations of French and Spanish envoys each fighting to stay at the top of the heap. Outside of politics, at Versailles Louis XIV legitimized his many “maitresse-en-titres,” causing heaps more suffering for his pious wife (read: more racy scenes).

Lasowski, a 2005 graduate of Drama Studio London who speaks four languages, sums it up by saying, “In the story of Versailles you have two main themes going on, the external politics and an internal war of morality and religion versus debauchery. What happens with my character is that somehow she will try to fight for morality and religion.”

She calls the costumes, wigs and history of “Versailles” “heavy,” but even her contemporary projects have weight. Last year, she had a featured role in David Bowie’s last video, “Blackstar.”

“It was an incredibly moving experience because we didn’t know [until afterwards] what his hidden messages in the video were, which was essentially theatricalizing his death. David Bowie wasn’t on set when we were shooting and a lot of the people didn’t know what it was for because the music wasn’t being played in the studio. I feel blessed that I was able to contribute a tiny element, but I also feel quite separated from it because his life is so epic and I just so happened to pass by.”

But Lasowski calls her career tactics “pragmatic” as opposed to romantic. “It’s like you are living your life and working, and living and working. I love what I do. Loving what I do is not waiting to get an Oscar, it’s just, like, living every day. I wasn’t even aware that people were watching my work until I started to get more jobs.”

Her comeliness has also attracted modeling agencies, but she says, “I suppose because I have this physique I could go in that direction but it’s not the direction I’ve ever gone in, so I don’t see why I should go in it now. We are lucky as actors because there has been this trend to ask us to come into commercials.”

She’s had a relationship with Chanel for about a year, and this season she sat front-row at Mulberry’s spring 2017 runway show. “With Chanel I’ve done a few photo shoots and gone to some of their events. It’s the type of relationship that builds very slowly. They always seem to know about who is coming up, even when you are just starting to feel that things are coming together. I have no idea where any of [the fashion projects] will go,” she says.

In between filming seasons two and three of “Versailles” she’ll shoot an art house film with Swedish director Marcus Werner Hed, in which she has the lead. “I can’t say much about it, but there won’t be corsets,” she laughs.