“It’s All about the Dress: What I learned in Forty Years About Men, Women, Sex, and Fashion” tells the story of the designer's life. 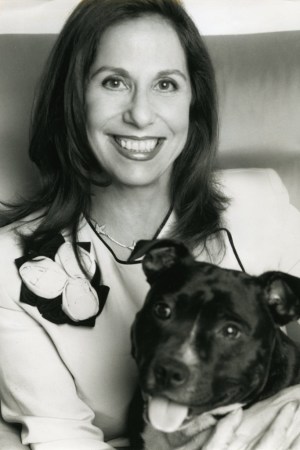 Vicky Tiel enjoyed remarkable success very early in life — and, unlike many who do so, she’s been able to keep it up. The designer says this is because she’s so driven. When she was just 20, she and her friend Mia Fonssagrives, like Tiel a recent Parsons graduate, launched their own collection in Paris. Life magazine devoted a prominent spread to them in 1965.

Even today, 46 years later, Tiel still keeps a measuring tape inside her bra at all times, so that if she meets a woman at a party who wants a dress, she can make “a $5,000 or $10,000 sale.” Today, Tiel dresses women ranging from Barbara Davis and her daughter Nancy to Kim Kardashian, Megan Fox and Chelsea Handler. Tiel has a shop in Paris, and she continues to sell her draped and shaped “Pretty Woman” dress 21 years after it appeared in the film.

This story first appeared in the August 23, 2011 issue of WWD. Subscribe Today.

Now she has written a book, “It’s All about the Dress: What I learned in Forty Years About Men, Women, Sex, and Fashion” (St. Martin’s Press), that tells the story of her life, punctuated with boxes featuring lists of what to do and what to avoid, and recipes, including one of Sophia Loren’s for pasta.

She has had a rollicking ride of a life with a great career, two husbands and two sons by her first. At 67, she still looks remarkably young for her age, something she attributes to “having a husband 13 years younger, a great diet of healthy foods and a lot of sex.” One surprising aspect of her story is that she lived with Elizabeth Taylor for 20 years as part of her entourage, and lived on her property for another 10. The two first met when they were making films on adjacent sets in the Sixties, with Taylor acting in one and Tiel designing the costumes for the other. Taylor saw Tiel’s clothes and wanted them. “She was in love with Richard Burton and she wanted to look hot for him,” Tiel recalls. “She loved the way I looked, and she immediately wanted to take off the clothes she was wearing and get into minidresses, see-through lace and lace stockings. I made minidresses for her in Mexican and African fabrics.” She spent time on the Taylor-Burton yacht, Kalizma, and Taylor even saved Tiel’s life during a helicopter flight when the door flew off and she almost fell out (Liz grabbed the poncho Tiel was wearing and held on for dear life).

Ironically, Tiel had been a big Taylor fan as a young girl and had even asked a hairdresser to give her the actress’ artichoke hairstyle. She recalls the girls in Chevy Chase, Md., where she grew up, having their maids iron their cotton bras into points, then wearing them under cashmere sweaters. Tiel learned from Taylor that, if you’re a big star, it’s important to be down-to-earth. Whenever the film goddess encountered someone who was acting pretentious or pulling rank, she’d say, “Oh, she’s just a B-actress.”

One of the nicest things Taylor ever did for Tiel was to introduce her to her idol, Coco Chanel. Taylor and Burton got together with Chanel and brought the young designer, who wore a see-through dress and told Chanel, “I am you.” She spent the dinner receiving the couturier’s advice, such as “Never have a boss,” and hearing her bemoan the fact that she’d sold her perfume business to the Wertheimers.

Tiel became involved with her first husband, Ron Berkeley, because he was Richard Burton’s makeup man and good friend. When they met, Berkeley was married. It took him several years to get divorced, but he and Tiel eventually tied the knot and had their children. However, Tiel believes Burton was a critical component in her marriage, and she said that when the actor died, it ended the relationship. (After Burton’s death, she found a photo stuck in a book of her husband kissing another woman in the background, and that didn’t help, either.) She realized that her spouse was what she calls “a rabbit,” and it was time to move on.

Other longtime friends and acquaintances include Woody Allen, Mick Jagger and Warren Beatty. Tiel met Allen in Paris and first encountered Jagger when they were both very young and Mick was (to her) the not-very-attractive lead singer of an unknown rock group. She’s still startled that he morphed into a rock god at whom countless women threw themselves. One of the scenes in Allen’s new film, “Midnight in Paris” takes place in front of her shop. She said that when she was writing her new book — which, surprisingly, she did on her own — she channeled Allen’s humor and wit. Later, she had a brief fling with Beatty, whose boudoir prowess she endorses, and they remained friends.

Tiel sold her collection exclusively to Bergdorf Goodman and Neiman Marcus for years, and whenever she had to give a talk to the Neiman’s staff, all they ever wanted to hear about were her Hollywood anecdotes. One from the book: Once Elizabeth Taylor went to a dinner party after Sophia Loren’s jewelry was stolen in Paris. “The two women had always been competitive. Wearing her emeralds proudly, Elizabeth said, ‘I’m so sorry, Sophia, to hear about the robbery. I see you are wearing no jewelry.’ ‘No, dear,’ Sophia said, opening her arms to display her enormous bust and a low-cut Dior. ‘I’m wearing my skin.’”

In her early years, Tiel’s clothes were ground-breaking. She is one of those designers — like Mary Quant — who claims to have been the first to do a real miniskirt. She was also early with jumpsuits and fringed leather pieces. But she says that, while Fonssagrives’ designs were more innovative, and her design partner had a more unusual color sense, hers were the ones that sold and sold. She has always had a strong commercial sense, and her business has been successful from the beginning, and continues to be. Her partnership with Fonssagrives ended in 1969.

Tiel now divides her time between her house in northern Florida, near Alabama, her place in the country near the Adirondacks, and an apartment in Paris. She met her second husband, Mike Hamilton, a fishing guide in Key West, when she decided to go for a walk wearing tight white pants; he spotted her and told a friend, “I’m going to marry that woman in the white pants.” They have been together for 23 years.

Tiel says she enjoys the contrast between her life in Florida, the Adirondacks and the City of Light. Country life — complete with chickens and rescue dogs and cats — is much to her liking. But not always. Recently her neighbor in the mountains had a telephone pole cut down because he felt it was blocking his view. Unfortunately, that was also the end, for a time, of the designer’s phone service.