Running until July 12, the show at the MAK museum is part of the venue's permanent Helmut Lang Archive.

MILAN — Helmut Lang the designer is more current than ever in Vienna, thanks to the MAK Museum of Applied Arts.

Running until July 12, the museum is showing “An Intervention by Helmut Lang” in its permanent Helmut Lang Archive.

“Helmut Lang plays a huge role in the broader concept of fashion,” said Christoph Thun-Hohenstein, director of MAK, the second-oldest museum in the world after London’s Victoria and Albert Museum having been founded in 1864. Expressing his pride in the archive, he said it reflected both the brand’s corporate and personal identity of the Austrian designer. “Helmut Lang does not travel, but he personally curated all the details,” said Thun-Hohenstein of the intervention, which “questions the archive as a simultaneous collection, storage and exhibition place, as a store of memories, and the potential of its use.”

The MAK has since 2014 dedicated a thematic area in its Design Lab to house Lang’s body of work from 1986 to 2005, the year he exited the fashion industry to focus on his art. In addition to the collection at MAK, more than 20 museum collections worldwide house a combined 800 Helmut Lang looks in their collections as donated by the designer. The MAK is the only institution worldwide that traces the development of the designer’s brand and identity, housing 9,000-plus related records, including more than 1,400 pieces of clothing, shoes, handbags and accessories in the form of prototypes, and also one-offs for fashion shows and merchandise from his men’s and women’s collections.

Lang creatively directed the presentation of these into a display that offers a new approach to viewing the collection.

At its heart is a special video edit documenting 12 out of 19 years of his Séance de Travail collections and a site-specific installation of excerpts from the Selective Memory Series. 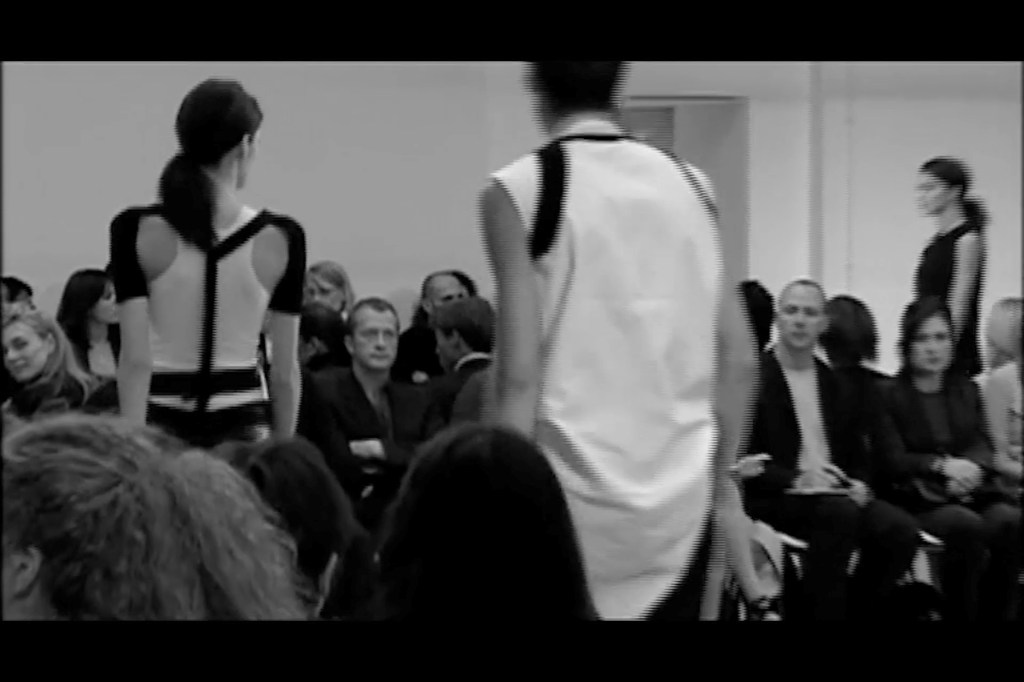 Lang chose to display no garments, instead presenting newly edited material that offers a new approach to the collection. He shows details of some of his ads, such as those on the New York taxis, but he reinvents them by overlapping different layers.

Lang throughout his career collaborated with the likes of Louise Bourgeois and Jenny Holzer with a joint exhibition at Kunsthalle Wien in 1998, which followed a work with the former at the Florence Biennial in 1996, or the Robert Mapplethorpe Foundation and Juergen Teller.

Helmut Lang the brand has been owned by Tokyo-based Link Theory Holdings Co. Ltd., a subsidiary of Fast Retailing of Japan, since 2006, which bought what was then essentially a trademark from Prada Group. The Italian fashion firm first bought 51 percent of Lang in 1999 as part of a buying spree and acquired the remainder in 2004.

When the namesake designer left the label in January 2005, Prada Group gradually dismantled the Lang business, shuttering production of the collection, famed for its sharp lines, abstract shapes and dark denim, and closed its stores.

Hailed as a master of modernity, Lang’s use of technical fabrics, his austere street style, purity of lines, stretchy T-shirts and rubbery dresses made him one of the most copied and coolest designers of the Nineties. When in 1998 he decided to not only show his spring collection in New York after years showing in Paris, but to show it first — before Europe — pushing his presentation up six weeks, he overturned the calendar, as he was followed by Calvin Klein and Donna Karan, setting the order that is still in place today, with New York Fashion Week held before the European shows.

As reported, the first exhibition on Austrian fashion design, “Show Off,” bowed at the MAK on Feb. 14, running until July 12, and displays five fashion looks by Lang, as well as the likes of Rudi Gernreich, Arthur Arbesser, Wendy&Jim and Peter Pilotto among others.