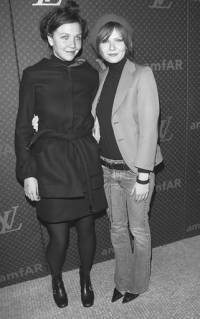 It’s safe to say a few of the 850 guests, who packed Wednesday’s Louis Vuitton/AmfAR party to launch the new watch line “Tambour” had ulterior motives when they called in an RSVP — namely, to be among the first to check out Capitale, the new and still officially un-opened restaurant housed in the former Bowery Savings Bank.

But the spectacle that greeted revelers like Kirsten Dunst, Maggie Gyllenhaal, Angie Harmon and Lauren Hutton was more than they’d bargained for: trapeze artists dangling from the ceiling, African and Brazilian musicians playing the drums, and logo-stamped leather bracelets just to get in the door.

“This is the best-looking club bracelet I’ve ever seen,” raved Natalie Leeds, admiring her wrist.

Apparently, that shot of glamour wasn’t enough for Monica Lewinsky, who searched the coat check and the check-in desk for a goody bag before heading for the door.

A few blocks away, Armani Casa hosted a dinner that also packed a visual punch. Installed amidst the Armani furniture were works from Christie’s upcoming Post-War and contemporary art sale, to give potential bidders a better feeling for what it all might look like at home.

Over dinner, some collectors eyed a painting of a red-faced woman by John Currin, estimated to fetch a minimum of $200,000, but Sylvia Zoullas, who prefers Pop, stared straight ahead at a Lichtenstein and two Warhols that have a combined minimum estimate of $8.5 million.

“I’ve got the best view in the room,” she sighed.