Performance artist Viktoria Modesta on empowerment, light-up prosthetic limbs and how the media still doesn't know how to talk about diversity.

PARIS — “When people haven’t seen the show, I just tell them it’s like the opening of a James Bond movie.”

Tucked away in an alcove of the Fouquet’s hotel in Paris, two days after the opening of her show at the Crazy Horse cabaret, performance artist Viktoria Modesta is trying to sum up “Bionic Showgirl” in the way she know best — peppered with visual references.

“It’s an understatement to call the Crazy Horse a cabaret: there is a lot of artistry, every single act has the most perfectly tweaked light and props so that you just lose yourself in the show,” continued the artist, who succeeds names such as Dita Von Teese and Conchita Wurst as guest performer at the Parisian cabaret. “Even though it is centered around the female body, it’s so much more clever than any traditional entertainment show. It’s like a music video coming alive.”

Running until June 16, “Bionic Showgirl” was conceived by Modesta in collaboration with Crazy Horse creative director Andrée Deissenberg, with music by Los Angeles-based producer Madeaux. Deissenberg contacted the performance artist via Instagram, wholly taken with her futuristic universe and empowering message around body positivity: Modesta, who chose to have her left leg amputated at 20 years old after years of health issues, wears a prosthetic limb.

The plural term would actually be more fitting: The 31-year-old artist, who was born in Latvia but moved to London when she was 12, commissioned three prosthetic legs for each of her appearances within the 90-minute show, including a light-up limb and a dazzlingly sharp-looking black spike.

“Our goal was really to try and cover a whole rainbow of female energy, from the feminine and sensual to the quite hard and fearless warrior girl,” said Modesta. “We did a lot of new things: generally, the girl’s costumes are very small, it’s very much about light effects on their body. I chose to bring a lot more fashion into it.” 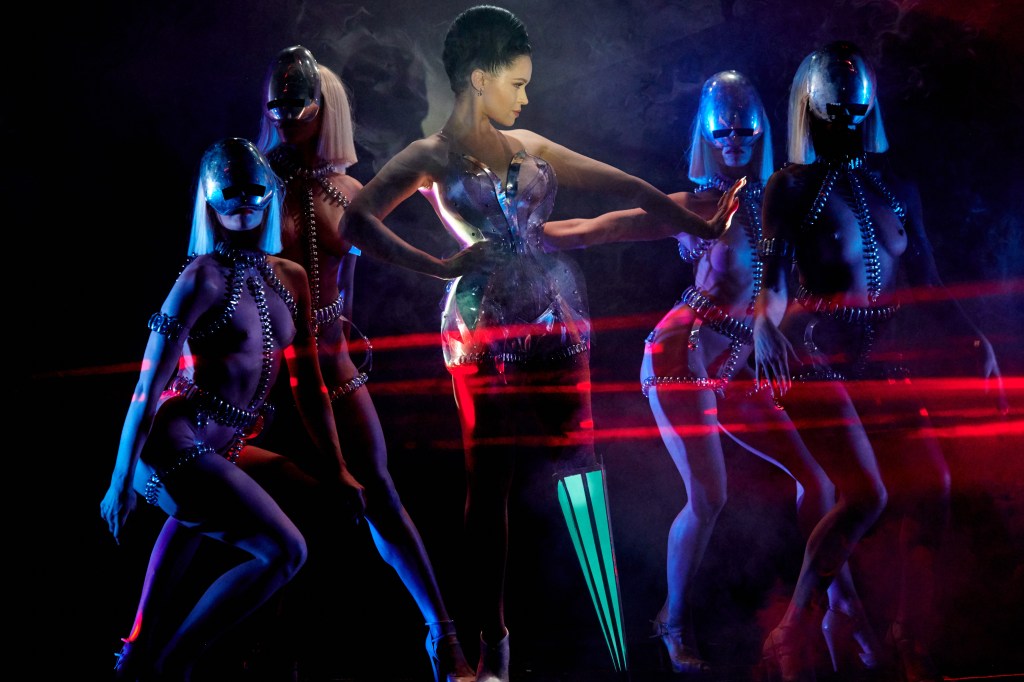 “New technologies and fashion are a big passion of mine,” said the performer, whose accent veers from stoutly South London (Modesta grew up near Croydon) to breezy Los Angeles, where she is now based. “I’m generally interested in anything to do with body extension or enhancement and smart fashion, and how we can move toward a more progressive way of either making fabrics or reimagining design, redefining how clothes could look.”

After years spent as part of the London club scene, Modesta’s breakthrough moment came during the 2012 London Paralympics, where she was invited to perform at the closing ceremony as a new age snow queen, complete with a diamond-encrusted bionic leg.

“That’s when I realized that this was a global topic,” she recalled. “There was a cultural shift starting to happen where people were starting to become more open toward the fact that we are all very different, and everyone has just been hidden away from the media to make us think that there is just this one type of person out there, which is not true.”

But there was still a long way to go. “I could see people looking at the diamond-encrusted prosthetic and realize everything that they’ve thought for decades is being put in question: what their parents taught them, or maybe how uncomfortable they’ve always felt around people with disabilities,” said Modesta. “There are still deep-rooted negative ideas about the fact that somehow if your body is differently shaped, it affects who you are. It’s just the most bizarre nonsense ever.”

Fast-forward to 2019, and things can still get tense. Modesta, who was invited to perform at Art Basel Miami in 2017 and whose video “Prototype” in collaboration with U.K.’s Channel 4 totaled more than 12 million views, had to put in a word with the Crazy Horse press team about the media coverage she was getting in France.

“Here in France they really like the word ‘handicapped,’” said the artist with an eye roll. “The media was like, ‘Amputee Artist Heading the Crazy Horse,’ like a circus freak show. I had to be really firm. You can’t talk like that any more.”

For some media outlets, prosthetics at the Paralympics or as part of avant-garde performances are one thing, but seeing them on the stage of a national institution like the French cabaret is clearly another.

“Growing up with this being part of my life, I wasn’t too surprised,” she shrugged. “But I feel like if you are putting your sexuality forward — and the Crazy Horse clearly has an element of sexuality in it — all of a sudden it’s like a green light for people to talk about it in a vulgar and brash way. Seeing the headlines, I was like, ‘Wow, OK.’” 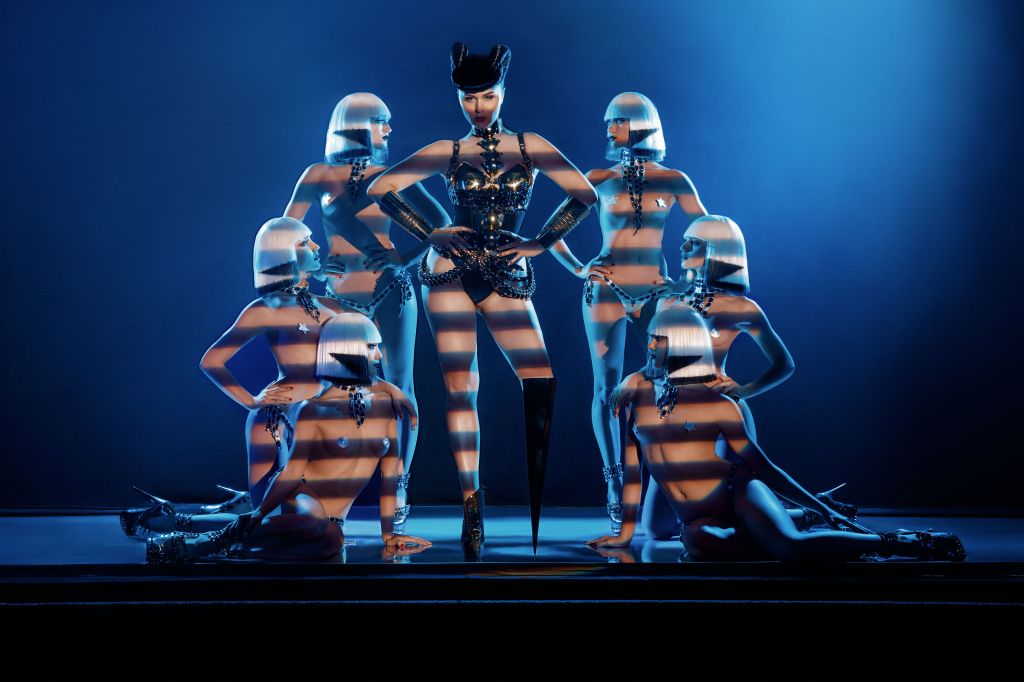 For Modesta, who bills herself as a “performance artist first, spokesperson and activist second,” the main goal of “Bionic Showgirl” is to showcase diversity.

“We’re fed so much information about how to be sexy,” said the performer. “People really need to just get on board with the fact that women are a very mixed combination of things and you just can’t continue pigeonholing them. You’re shamed if you’re overweight but also if you do something about it. You’re shamed for not being sexy enough but also for being too sexy. There is no mold: The idea that you can’t be an artist, an entrepreneur, your own boss, a strong woman but also sensual; that intelligence, sexuality and beauty don’t mix — with this show we’re just like, f–k off.”

Thankfully, things have shifted since Modesta released “Prototype” and was literally “the world’s first amputee pop artist” as billed by the Channel 4 video (her team, disbelieving at first, found it to be true after a session of extensive online research.)

“Visibility has greatly increased thanks to a whole new whole influencer community of people with different bodies,” said the performer. “For that particular community, social media is the best tool ever: they are not relying on the media, they are not even relying on the fashion or modeling industry, they are creating their own image, visibility and branding of how they want to be seen — and that’s so awesome. It’s a very positive thing.”