”The Village” premieres in Brooklyn. 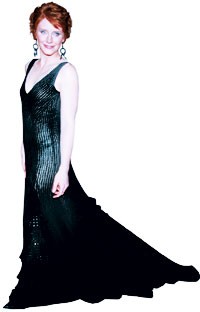 The setting for Disney’s premiere of M. Night Shyamalan’s “The Village” Monday night was the bucolic Prospect Park in Brooklyn, decorated like a Renaissance fair meets the Pilgrims’ first Thanksgiving. But that didn’t stop star Bryce Dallas Howard, making her film debut, from going glam in a Zac Posen gown with a train.

“Everyone is freaking out over this dress,” squealed Howard, who added that she’d actually bought a Posen for an opening-night party a year or so before. This time she got to borrow.

This story first appeared in the July 29, 2004 issue of WWD. Subscribe Today.

A handler said, “I told Bryce today, ‘You’ll never have to choose what you wear again.’”

Co-stars Adrien Brody, Joaquin Phoenix, Judy Greer, Sigourney Weaver (in an auburn Donna Karan dress), William Hurt and theater actress Liz Stauber made their way to the outer borough to feast on lemonade and wheat berry salad, as did Edie Falco, Eva Amurri, Mickey Dolenz, Patricia Clarkson and Tina Fey, who found herself being entertained by one of the hired magicians.

“My parents always said Prospect Park was too dangerous,” said Julia Stiles, who landed her first speaking role from Shyamalan in “Wide Awake.”

At least she had pal Josh Hartnett to protect her. After exchanging phone numbers, they promised to meet up later in the evening. “I got nothing to do tomorrow,” Stiles explained.

Loudspeakers bellowed “Welcome to our village in the woods. Cell phones must not be heard,” and the hoity-toity crowd trekked a few hundred feet in their Louboutins on a foot path lit only by “villagers” wearing yellow cloaks and holding lamps. Eventually they arrived at an amphitheater for a screening under the stars, with blankets on each chair in case the weather turned beastly.