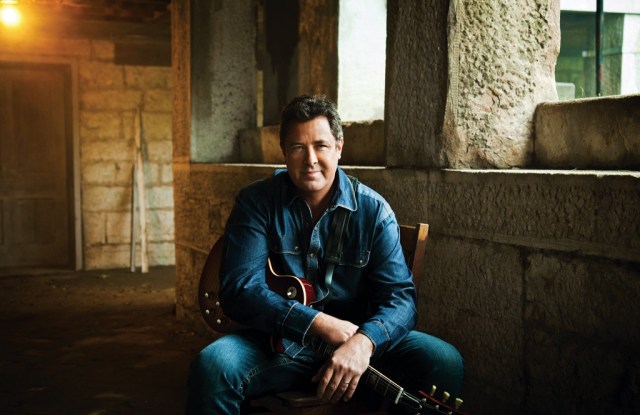 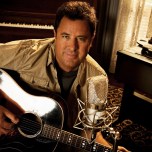 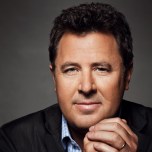 “Go look at all the hillbilly singers, and you won’t find a bobblehead. I guess that’s some kind of coup,” Gill says with a laugh over a Coke at a New York City restaurant. “They’ve never done a bobblehead of a non-player. But it’s good. My head will do that sometimes.”

Gill is in New York on a promotional tour for his latest album, “Guitar Slinger,” his first new studio album in five years.

“I started working on this record almost two years ago,” he says. But he was drawn away from the project to produce Lee Ann Rimes’ most recent album. “That took us down a different road for a while. And we just took our time. We weren’t in a big rush.”

The result is a highly personal compilation of 12 cuts, all of which were either written or co-written by Gill. “A lot of the songs are steeped in truth,” he says. “Maybe it’s my age. Being 54, I look at things a little differently now. I like to write songs that matter, songs that have a conscience.”

Many also have a spiritual twist — a result, perhaps, of the influence of his wife, Christian singer Amy Grant, who duets with him on “True Love.” Their 18-year-old daughter Sarah Chapman is also featured on that track, and his other daughters, Jenny, and 10-year-old Corrina sing on the record as well.

It’s no surprise that the album would be a family affair. “Guitar Slinger” was actually recorded in a newly completed studio in the singers’ Nashville home.

Gill says it took two years to finish building the studio and he’s “still tweaking it. You get down one road, then you try something else. You pick the wrong fabric, color, flooring. I have a designer type of mind and I’m always messing with something to make it better.” He says the constant change drives his wife crazy, but is just part of his “neurotic side.”

It’s no surprise that Gill would be neurotic about his home, which was badly damaged during the floods in Nashville in May 2010. He also lost an extensive amount of his musical equipment, which includes some 120 guitars. “The floods took a big part of my guitar collection,” he says of the instruments, all of which could tell a different story of the musicians and projects they played on. “I look at musical instruments as living things, so losing them was like death.” In fact, a line in the title cut of the album actually references the disaster: “There’s a few licks left in this Guitar Slinger, even though half of my stuff’s in the Cumberland River.”

But he smiles when he’s reminded by his wife that he “could make a living with just one” guitar.

In fact, Gill has been making his living as a professional musician since he was 15. He was a member of Pure Prairie League over three decades ago before branching out on his own. The singer, songwriter, producer and multi-instrumentalist has won the CMA’s coveted Entertainer of the Year award twice, been named Male Vocalist of the Year five times and won Song of the Year honors four times. He was also one of the youngest performers inducted into the Country Music Hall of Fame and has been honored as Most Prolific Artist by USA Today.

He estimates that over the course of his career, he has worked with nearly 500 other artists, including everyone from Alice Cooper and Eric Clapton to Gladys Knight and Emmylou Harris. “I’m proud that I’ve continued to do that even after I’ve had success of my own,” says Gill. “I’m actually a lot more comfortable as a sideman.”

Gill attributes his longevity in no small part to talent, and a little bit of luck. “I look at people I admire — Paul McCartney, the Rolling Stones, James Taylor, Springsteen, Willie Nelson — the reason they’ve sustained all these years is that they’re great. I’m not putting myself in the same league as these people, but I think in my heart of heart, my longevity is because of talent.

“Every step of the way, I try to get better — sing better, write better.”

When asked which part of the business he likes the most, Gill says it’s hard to choose, although playing live is certainly at the top of the list. “There’s an immediate response,” he says. “It comes right back to you.”

But things are different today in the era of YouTube. “Before, you could go out and try things and if you fell flat on your face, it was gone. Now it’s captured forever, to be looked at, dissected and critiqued. It loses its purity.”

Gill has steered clear so far of the social media craze. “I haven’t tweeted yet and have yet to send a text. With the written word, you can’t see inflections or intentions. And sometimes, things can come across harsh that aren’t intended to be.”

Gill knows that life itself can sometimes be harsh. And so he’ll be part of an all-star trio who will pay tribute to Glen Campbell at the 45th annual CMA Awards on ABC on Nov. 9. Campbell, who is also renowned for his guitar prowess, is battling Alzheimer’s disease. Gill will be joined by two of country music’s other guitar virtuosos: Brad Paisley and Keith Urban. “Glen is doing a final tour and he’s one of my heros,” Gill says.

On Thanksgiving weekend, Gill will collaborate with Sting as part of the CMT Crossroads series, filmed last month in New York. “CMT kept coming to me with ideas [about who to collaborate with], but I just wasn’t fired up about them,” he says. They then suggested Sting and Gill jumped at the chance. “He’s severely talented and our voices are a similar register. And we’re a lot alike. He takes music seriously, he’s a musician and a songwriter. I really had the time of my life.”

So what’s next? He says he’s working on an album with the Time Jumpers (who are featured on a cut on “Guitar Slinger”), a big-band style group with which he plays at a small Nashville club on Monday nights. “It’s like Count Basie with horns,” he says. “It’s a little over my head, but it’s fun.”