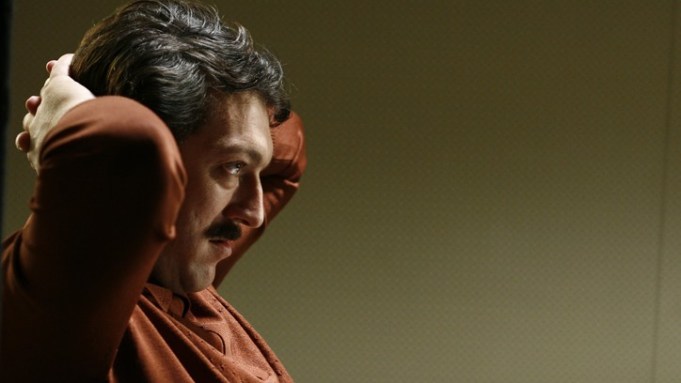 On-screen at least, Vincent Cassel is very, very good at being very, very bad. The French actor first gained notice in “La Haine” as a young skinhead. He has since played a Russian mobster’s son (David Cronenberg’s “Eastern Promises”) and a sadistic criminal (“Derailed”).

And his latest project doesn’t quite make a bid for sainthood. As the famed French gangster Jacques Mesrine in a two-part biopic “Mesrine: Killer Instinct,” out now and “Mesrine: Public Enemy No. 1,” opening today, Cassel is at once devastatingly charming and spontaneously violent. One false look or word can set off his inner time bomb.

Cassel is so convincing at channeling Mesrine that it is hard to process the passionate, but soft-spoken man doing interviews in a suite at Manhattan’s Mercer Hotel on a hot August morning. Dressed in a crisp button-down and dark jeans, his blue eyes twinkling with mischief, not menace, Cassel is a live-wire, jumping from French politics to philosophical musings in practically one breath, all while maintaining the politest of miens.

And he is definitive in his take on Mesrine, who during the Sixties and Seventies was responsible for robberies, kidnappings and murders before he was gunned down by the police in 1979.

“I don’t think there are any redeeming elements in this guy,” says Cassel, who gained 45 pounds to play the criminal, an experience he is not keen on repeating. “He was a…rebel without a cause.”

That’s not to say that Cassel’s is a one-note song on Mesrine, who was something of a media sensation because of his charm, dramatic jail escapes and the controversial autobiography he wrote while in prison.

“He couldn’t be a normal guy,” explains Cassel, 43. “Those guys, once they went and robbed, they got that shot of adrenaline, they really got hooked. To be a normal person, you go to buy stuff, you take the kids to school, plus, it is boring if you get caught in the family life and just that. We’ve created so many things so that society doesn’t get crazy, marriage and responsibilities and we’ve been taught not to do so many things. But the truth is that at the end of the day, we’re not free, and this guy chose not to live like that. You can call him horrible, and I agree with you, but he’s free.”

Lest anyone mistake Cassel for an anarchist, the actor — he is married to actress Monica Bellucci with whom he has two daughters — has no plans to give in to any asocial, state of nature tendencies.

“I’m like everyone else,” he says. “I’m like 99 percent of the people. I don’t have the guts to lose my family or just do whatever. The main line of my [film] character is never repress anything. I’d love to be like that, but I can’t.”

The son of famed French actor Jean-Pierre Cassel and a journalist mother, Cassel junior grew up in Paris’ 18th arrondissement (the same in which Mesrine was killed) in what he describes as a “pretty bourgeois and a Protestant kind of upbringing.” Between his father and his grandfather, who owned a cinema in the South of France, a life of performing seemed inevitable.

“It was pretty hard for me to escape from maybe not acting, but showbiz,” Cassel explains. “My life, from my point of view, started when I began to be an actor at 16, and I could suddenly use my experiences for a creative purpose.”

It’s a far cry from the controversial and dark work he has produced as an adult, including “Irreversible,” which paired him with Bellucci and contains a still-talked-about graphic rape scene. Next, he can be seen as a dictatorial ballet master in Darren Aronofsky’s “Black Swan” and in Cronenberg’s forthcoming “A Dangerous Method.”

It may come as a surprise, then, that Cassel, who likes to compare humans to animals (Mesrine is a predatory puma or panther), sees himself as akin to a rooster.

“It’s the symbol of France. What they say about the rooster is it’s the only animal that still sings when its two feet are in the s–t. That’s kind of true because even when everything goes wrong, the French people pretend that everything is fine and they’re the best,” says Cassel, flashing a grin. “It’s an attitude I can identify with.”