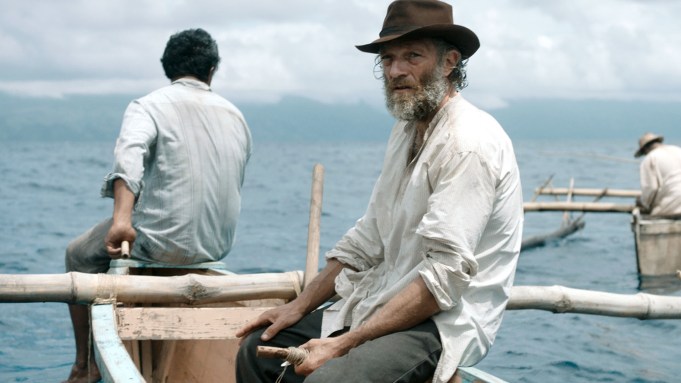 Two months in Tahiti may sound like the ultimate desertion of city life, but for Vincent Cassel it was all in a day’s pay.

That was a job requirement to portray the post-Impressionist artist Paul Gauguin, who chucked the political and moral restraints of European society to move to French Polynesia in 1891. To take the lead in Edouard Deluc’s “Gauguin: Voyage to Tahiti,” Cassel had to lose a lot of weight and live off the land. His hollowed physique may surprise fans of his roles in “Jason Bourne,” “Black Swan” and “Irreversible.” Driven by creative freedom, Gauguin toiled in Tahiti for years at two different points in his life. He died in the more remote Marquesas Islands unacclaimed, impoverished and alone at the age of 54 in 1903.

Watch: An exclusive clip from “Paul Gaugin: Voyage to Tahiti”

Aside from the 12-hour time difference that made phoning home fairly touch-and-go, Cassel said he dealt with other challenges including dropping 44 lbs. “I had to look sick. The guy didn’t eat, he was losing his teeth, he felt old. To get close to that, I decided I had to lose a lot of weight. When you don’t eat, you get skinny.”

But the bare-bones existence on location had its rewards. “Honestly, I never felt so good in my life. I was in Tahiti. I felt like I was in the middle of ‘Avatar’ and I took some ecstasy. That was the feeling I had every morning waking up. I would take fruits and raw fish. I would surf every morning at five o’clock in the morning before getting on set,” he said. “I was surrounded by incredible people who welcomed us like never before. There was no trailer, no fancy whatever. But the fact that I had the little hammock on the beach, waiting to go on set with some bananas — that was more than enough. I can understand why at the time he was driven to lead a life like that, even though that’s not what he found over there.”

Along with today’s release in New York and Los Angeles, Cassel will be adding to his 70-plus film credits with other releases in the months ahead. First up is “The World Is Yours” (a Cannes standout) with his “dear friend,” the director Romain Gavras, actress Isabelle Adjani and a crop of young actors. He will appear with Sandrine Kiberlain and Romain Duris in “Black Tide,” based on Dror Mishani’s novel “The Missing File.” Look for Cassel in Jean-Francois Richet’s crime thriller “The Emperor of Paris,” about Francois Vidocq, a real-life “public enemy number one.” More sci-fi is Cassel’s role in William Eubank’s “Underwater” with Kristen Stewart. He is also on board Carlos Diegues’ Brazilian movie “The Great Mystical Circus.” In September, he will start shooting “Hors Norrmes” with directors Olivier Nakache and Éric Toledano.

But he isn’t haunted by any of his many incarnations. “I just believe that acting is very easy and I never take it too seriously. You know it’s a game that we play. My life just doesn’t depend on it. I really think if you stay on a playful level you give more of yourself. I don’t think acting itself is about suffering. Acting is about having fun even though you have to play very sad things sometimes. I see myself as really balanced,” Cassel said. “I have quite a few gray hairs coming out after every movie. But I’m having a lot of fun and I’m really lucky to have after 30 years of doing this job to still be working.”

The prospect of “forgetting the icon and treating Gauguin like a man” is what reeled Cassel into the project. “Meaning, what this guy actually did. He believed in himself against all odds. He was brave enough to leave everything behind — brave and cowardly. Because leaving your family is to be a coward from my point of view. He was just on a mission running after something he wasn’t sure of,” said Cassel, adding that long talks with the director and screenwriter led to removing historical references. “The idea is to see what’s going on in his life, day-by-day, minute-by-minute and the decisions he makes struggling with his presence.”

The decision to spend two months away from his family and the person he shares his life with (Tina Kunakey) was not cut-and-dried because “once you’re there, you’re there.”

“I don’t think I would risk everything for the sake of my art. I’m not like that…What I really related to is his creative freedom, meaning he had something in mind and nobody could take him away from that. That aspect I really admire about him,” Cassel said. “But it’s terrible how he left his kids and all that. People are different, but the key to eternity is to take care of your kids. The minute you sacrifice them for something as abstract as art you have a huge amount of selfishness. I hope I am not like that.” (Cassel and his ex-wife Monica Bellucci have two children.)

Gauguin was sexually involved with more than one teenage Tahitian muse, but the movie focuses on Tehura, who appears to be offered by her parents to the artist. The 18-year-old actress Tuheï Adams landed that part. “As a writer [in Noa Noa], Gauguin compressed all those relationships as one. Maybe so it looks more romantic or something. The movie is definitely not the true story of Paul Gauguin. It is the story of Paul Gauguin and the director who adopted the story…” Cassel said. “When I came to this project, I said, ‘Please do not choose an underage actress. It will look wrong and it will become the center of the movie. I don’t think that’s the story you want to tell. It’s not a story about a pedophile. It’s the story of a man leaving the modern world, trying to get back in contact with the most savage part of himself so he can do real art.’ So, yes, we tweaked the story, as Paul tweaked his own story.”

Cassel disputed claims that the artist was almost in search of sex tourism. “That wasn’t the case at all. He had no money, he was hanging out with the poorest people on the island. From our modern point of view, [underage marriages] is something we cannot accept and it’s totally crazy even though it’s still happening in a lot of countries. It’s unbearable to think like that nowadays but to put it back in context, he wasn’t a criminal from that era’s point of view and that part of the world,” Cassel said.

How the film will be received in light of the #MeToo movement is unknown. His own view of the movement is a European one. “I have to tell you something: I am not a Hollywood person. I’m French. In France, I don’t think it’s changed that much, but the relation of power may be it’s not as strong as it is in Hollywood. Hollywood is different. It’s a bigger industry with different forces colliding. Here, it’s smaller and everybody knows each other. There is not as much money involved. I’m sure we do have those problems — masochism and the relations between men and women. It’s been happening. But I don’t think it would have happened the way it happened in Hollywood in France. People would have talked about it maybe a little earlier.”

More specifically, Cassel said, “It’s a moment of revolution. Things are changing. I compare it to the French Revolution. After the revolution, there was a moment of chaos before democracy really existed. Let’s say our modern idea of democracy. After the revolution, and we are in the middle of this, there is a moment of chaos with a lot of angst, anger and a sense of revenge. But hopefully at some point, when things finally become equal between men and women, people won’t have to fight that hard and be so bitter about what happened. Obviously, things have calmed down. I guess it’s going to take a little more time. But the good thing is it’s moving in the right way. That’s the most important thing.”

On a much different level, Cassel, the son of a dancer, uses different artistic movements to learn. “I’ve always danced — ballet, circus school, capoeira [as seen in “Ocean’s 12”], tap dance. Like learning languages, if you know one, two, three — then the fourth and fifth are going to come easy. I wouldn’t say I do martial arts because I’m not a fighter. Every time I get involved with a different physical movement, art form or whatever, it is for a movie. It’s an opportunity to learn something new and still have fun with my body as long as I can,” Cassel said. “My Russian is really bad. I learned it for movies. I understand Russian and I get my way around. But I speak five languages — French, Portuguese, Italian, Spanish and English. That gives you pretty good skills to travel around the world all ready.”

With his next shoot set to start in September, Cassel sounded more than ready to escape Paris’ summer doldrums. “What I know is I’m going to go to Guéthary, I’m going to have a lot of friends coming and I’m going to get married. So right now my plans are just dreamy,” he said. “It’s going to be at the end of the summer. Meanwhile, I’ll have to get fit, tan and prepare the wedding.”