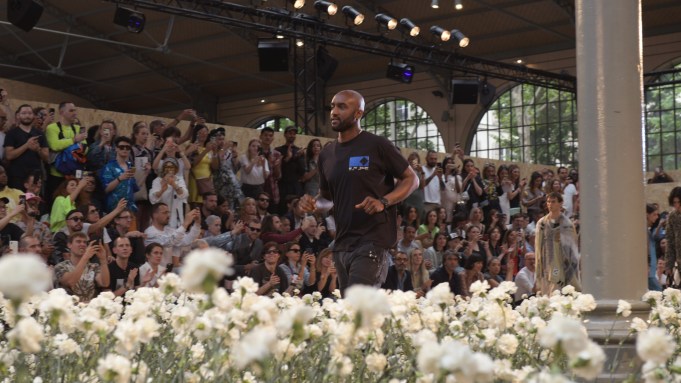 FLOWER POWER: The Carreau du Temple was transformed into a field of white flowers for Virgil Abloh’s Off-White spring 2020 show on Wednesday.

A breathtaking sea of 30,000 white carnations covered the floor of the space, each planted in a bed of soil and moss.

“We started planting the flowers at noon on Tuesday and only just finished in time for the show’s rehearsal at 8 a.m. this morning,” said floral scenographer Marianne Guedin, who alongside her team at production company Eyesight was responsible for the show’s set.

“Each bud was soaked in water beforehand so it would have the perfect shape. It was a lot of work but it was worth it — the finale was beautiful,” she continued, in reference to the models walking through the field of carnations (and trampling them at the same time) at the end of the show, followed by Abloh enthusiastically throwing a flower to his wife Shannon sitting front row.

Takashi Murakami, Heron Preston, Sita Abellan, Ben Gorham and Lewis Hamilton were among guests attending the show, stepping carefully around the flowerbeds beforehand to make it to their seats.

Hamilton was musing on plastic reduction prompted by the show’s invitation, on which the word “plastic” appeared in all capital letters.

“I try not to support the plastic industry,” said the Formula One racer and Tommy Hilfiger collaborator, sitting next to model Larsen Thompson. “I don’t use plastic bottles anymore and I’m pushing my team within Formula One to do the same as well. Also, we managed to get my clothing range to be 45 percent sustainable. We’re actively pushing that boundary.”

“We follow each other on Instagram and have been chatting on WhatsApp, but it’s the first time we meet in real life,” crowed Rousteing. “I’m so happy, I love his work.”

The feeling was mutual.

“I respect this man,” solemnly announced the Colombian artist, who collaborated with Madonna on the first track, “Medellin,” of her new album “Madame X.”

The show was nearly stolen by a pair of brightly clad musicians obliviously lighting up while sitting front row.

Ademo and N.O.S., aka Tarik and Nabil Andrieu of French rap superstar duo PNL, are known for having never given a single interview since their first EP “Que La Famille” came out in 2015, but obviously don’t mind causing a stir. Rumor has it they smoked all the way backstage, where they posed for pictures with the real star of the show, Abloh.