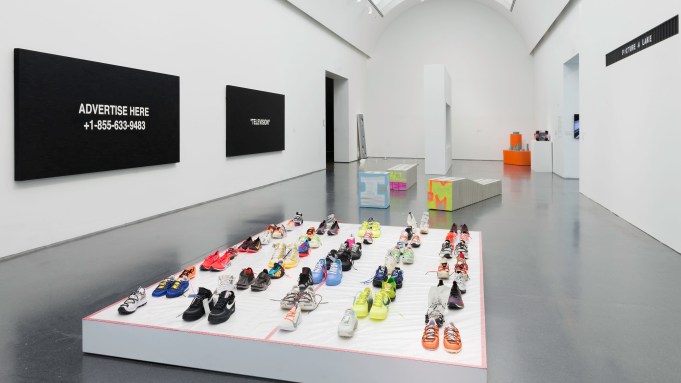 CHICAGO — From fashion and music to art and architecture, “Figures of Speech,” the first exhibition devoted to the work of Virgil Abloh, opens Monday at the Museum of Contemporary Art Chicago.

“I like to think of it as a snapshot of culture,” said the 38-year-old Abloh, the founder of Off-White and artistic director of men’s wear at Louis Vuitton, wearing a hooded sweatshirt and ripped jeans, by Off-White, and electric blue Nike sneakers, also his design, during a sitdown interview Friday in an office at the MCA, away from the buzz of the museum press preview.

“If you were to take a cross section between the consumer and the producer, or the tourist and the purist, or Europe and America, in terms of, like, it’s almost like you took a slice of the Internet and you caught a little bit of the real world,” said Abloh, who DJs around the world and served as Kanye West’s creative director at Donda, where he oversaw everything from album packaging to stage design.

“You would get the high, the low, you would get art, a little bit of the sneaker culture. I’m just going around the world more as like an anthropologist or something, just sort of seeing and creating and putting something else on the table,” continued Abloh, who grew up in Rockford, Ill., “a kid from nowhere,” as he says, who holds a bachelor’s degree in engineering and master’s degree in architecture.

The world may know Abloh through Off-White and Vuitton, where he’s the first African-American to oversee men’s wear at a French luxury house, yet fashion is only one aspect of his work.

Throughout the work, a political undercurrent runs throughout the exhibition, raising questions about inclusion, race and equity. The survey is divided into seven parts: “Early Work,” “Fashion,” “Music,” “Intermezzo,” “Black Gaze,” “Design” and “The End.”

Set in a space designed by Samir Bantal, a director of AMO, the research studio founded by Rem Koolhaas, the exhibition takes viewers on a tour of Abloh’s career, starting with Pyrex Vision, his first fashion brand launched in 2012. Pyrex refers to the glassware found in home drug labs, and his early designs referenced Italian artist Caravaggio and “23,” for Chicago Bulls legend Michael Jordan. They reflect the extreme high-low paths underprivileged youth perceive as ways to overcome their situation — become a drug dealer or make it big in sports.

The exhibition then moves on to Off-White, beginning with T-shirts, hoodies and sweatshirts and progressing into tailored, complicated gowns. Included in this collection is the Princess Diana-inspired white jacket and biker shorts Naomi Campbell wore to close the brand’s spring 2018 runway show.

Other pieces in the exhibit include an industrial belt titled “Testing Belt,” which Abloh made for A$AP Rocky while creating the graphic look for the rapper’s 2013 debut album; a large foam, architecture scale Pink Panther sculpture; a stack of prototype rugs Abloh designed for Ikea, and a massive display of Nike sneaker styles, redesigned with words written in quotes, like a neon orange pair with a gray swoosh and the word “runway” written in black marker on the side.

One work, with numbers written on yellow cards on the ground resembling a forensic firearm examination, seems to speak to the rampant gun violence plaguing Chicago. A painting called “Cotton” reverses the colors of black and white and calls attention to the history of cotton and slavery in America.

Asked about the exhibition, Abloh says his favorite part is that it exists at all.

“I’ve only seen glimpses of my work, I’ve never unpacked it all and put it up in a neat order,” he said. “I don’t weigh anything more than another. My favorite things are probably the sculptures or the things that don’t have my signature on it. That’s a part of the journey. Like, how does a kid from nowhere make something? You have to let people know you made it first in order to get to this holy sphere of detachment so that people can look at an object itself.”

The exhibition includes the Church & State pop-up store, featuring sold-out reissued Off-White items, like the Caravaggio T-shirt, the Bernini T-shirt and a women’s white motorcycle jacket. The store includes items Abloh designed exclusively for the MCA and new products he created in collaboration with artists like Simon Brown and Futura.

It may come as a surprise that Abloh, once a sneaker-wearing skateboarding kid who dreamed of working in fashion, is really not that into clothes — or even sneakers.

“Physically, I can only wear one thing a day,” Abloh said. “Once you start sipping the Kool-Aid and being like, ‘I love clothing,’ that’s a deep end. I know people that love fashion or love architecture to the point where they don’t see the rest of the outside world…It’s the same with sneakers, the same way. There are kids that can tell you this was that, that, that. I just look at them as objects and say, ‘This should probably be like that.’”

Would he say he loved fashion more back then?

“Yeah, ‘cuz, you know, the mystique, the magic fairy dust, like where does it come from? There are works in the thing [exhibition] — there’s this dripping facade of a Parisian building,” Abloh said. “That piece, that’s an artwork that’s based on the reality that I found of fashion once I was working in it. That was probably the moment that I realized that things I believed in are just a facade. Fashion. Brand. Specifically I mean, like, brand — the outward thing. It’s kind of like the billboard. What’s on the face is what’s projected outside.”

So what’s next? Retirement?

“I don’t know. It depends on which way the wind blows. Straight up, like — no, I was going to say something. I have contracts, I have contracts — and bosses,” Abloh said, with a laugh.