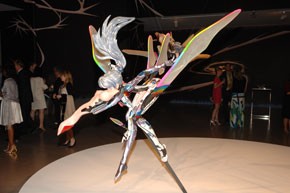 The affair kicked off the Takashi Murakami exhibit at the Brooklyn Museum, and the hooded figure was referring to 10 street vendors selling real multicolored Vuitton bags. “It looks like a bazaar, it’s hysterical,” Evangelista said.

Helen Schifter couldn’t contain her excitement at the display, helping herself to a mini-bottle of Champagne out of a hot dog cart. “I should really be a Champagne seller,” she said, exclaiming, “$5, $5” to the crowd.

Marc Jacobs arrived with Eva Herzigova, with whom he had shot Vuitton’s fall campaign earlier in the day. “I never bought a fake anything, not a fake tooth, a fake suit or a fake Coca-Cola,” Jacobs professed. “I am 100 percent real.”

Inside, the likes of Julien Schnabel, Richard Prince, Chiara Clemente and Waris Ahluwalia, Tinsley Mortimer, Jennifer Creel and Nicole Miller were getting their first glimpse of the exhibit. Kristin Davis found herself near the temporary Vuitton boutique, where she admitted to once being given a faux Vuitton.

“It was meant well, but I thought, I can’t be seen wearing this,” she said.

Post-dinner, guests grabbed their Murakami place mats and filed into an adjacent hall, where Kanye West heated up the crowed with a live performance.