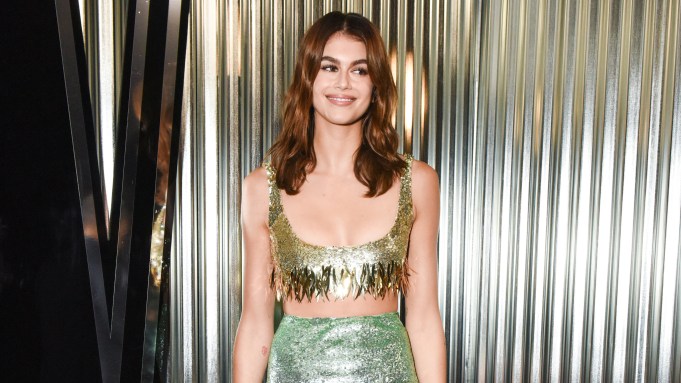 W Magazine’s Oscar “Best Performances” party was the place to be on Thursday night.

Typically a relatively tame affair, held at Chateau Marmont, this year saw a change of venue — and a whole different vibe.

Taking over hot spot Gigi’s, held in a tented outdoor area by the restaurant, guests — all Hollywood VIPs — let loose on the dance floor, indulging in Champagne and smoking cigarettes (and vapes, for the younger set). It was all black everything inside, from the ceiling to the carpet.

Alana Haim, star of “Licorice Pizza” — up for Best Picture — twirled with sister, and bandmate, Danielle — both in Louis Vuitton; Dakota Johnson mingled with Kate Hudson, also in looks from the house; Austin Butler, getting buzz for his role as Elvis Presley in Baz Luhrmann’s upcoming biopic, strolled hand in hand with model Kaia Gerber (donning a sparkling ensemble).

In one corner there was musician Frank Ocean, in another, Zoë Kravitz and Jonah Hill — standing out in a blonde buzz cut and Hawaiian shirt poking under his Louis Vuitton suit. Even directors showed up, including Paul Thomas Anderson, Ava DuVernay, Quentin Tarantino and Pedro Almodóvar.

Held in partnership with Louis Vuitton, Nicolas Ghesquière was holding court at the entrance, getting photographed with just about everyone in front of a giant W sign. He, Sara Moonves and Lynn Hirschberg were hosts for the evening.

“This is trippy,” exclaimed “Belfast” actor Jamie Dornan as he walked into the entrance, a long black hall flashing with disco balls. The film is up for several awards, including Best Picture and Best Director.

It was already 10 p.m. by then, but the party — which had kicked off two hours prior — was still going strong. Soon, Best Actor nominee Andrew Garfield, star of “Tick, Tick… Boom!,” made his way in.

Paparazzi and fans were huddled outside.