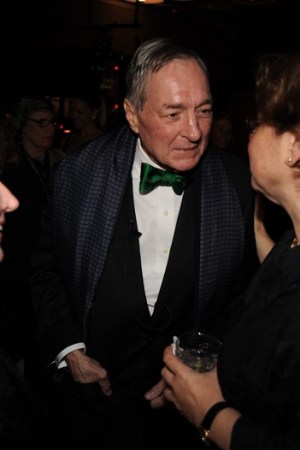 On Monday night, art was the focus when W magazine hosted a dinner for photographer William Eggleston at the Whitney Museum. Clarins, Leviev, Max Mara and Vera Wang Look sponsored the affair, which was attended by Eggleston contemporaries William Christenberry and Lee Friedlander, along with younger photographers such as Juergen Teller. With all the lensmen gathered together, the scene turned meta before too long. The famous photographer guests started taking pictures of the hired photographers who were taking pictures of them.

But Eggleston, 69, appeared at ease on the other side of the camera. When asked if he liked the way he looks in photos, he replied in his usual chatty fashion: “Sometimes.”

Why did he decide to exhibit at the Whitney after a 32-year hiatus from showing in New York?

If Eggleston wasn’t in the mood to elaborate, his admirers were. Whitney director Adam Weinberg effused to the crowd, which also included Dennis Hopper and Patti Smith, “Bill is one of the few artists who is both living and a legend.”