Walker Buehler on the Dodgers’ Win and Baseball Style

The 26-year-old righthander opts for comfortable essentials from Vuori and others when not on the field.

Walker Buehler wasn’t even born the last time the Los Angeles Dodgers won the World Series in 1988. But he was a crucial part of the team’s championship this year.

The 26-year-old hurler from Lexington, Ky. — who has been anointed by Sports Illustrated as the best young pitcher in baseball — set the tone as the starting pitcher in game three, registering 10 strikeouts in six innings to give his team the edge in the series over the Tampa Bay Rays, which the Dodgers eventually won in six games.

“It was pretty crazy,” he said about becoming World Champions during the pandemic-shortened season. “You always think about how it’s going to feel to win, but this was a long road.” In fact, even three weeks later, Buehler said the reality of what he and his teammates accomplished still seems surreal. “It’s a cool deal and I’m sure it’ll sink in as time goes on.”

Navigating the new rules instituted by Major League Baseball and being sequestered in a bubble for the post-season that was played at a neutral site required players to make a lot of adjustments, but for Buehler it was all worth it to be able to hoist the championship trophy.

“We had to do so many things differently. It was complicated because we were all in a bubble together and didn’t have to travel, which we’re not accustomed to,” he said, “but by the end of it, it worked out pretty well.”

He said that being with his teammates 24/7 did result in “a few dark days,” especially when they were trailing three games to one in the National League playoffs, but they got past it. “Coming back from 3-1 down was a special moment,” he said, as was the ability to battle through a couple of blisters on his right hand that threatened to derail his post-season. “As a team, we finally got over the hump after 32 years.”

But while Buehler is still basking in the glow of the Dodgers’ win, he said it also meant a lot to him to see his teammate Clayton Kershaw finally clinch a championship, a feat made even more special because it was accomplished in Arlington, Tex., about 20 miles from where Kershaw grew up. The southpaw has played his entire 14-year career with the Dodgers.

Once the series was over, Buehler traveled back to his home in Kentucky and even served as an ambassador for the Breeders’ Cup race last weekend. “It sounds like a bigger deal than it really was,” he said with a laugh. But what made it truly special is that he is a minority owner of the winning horse, Authentic. “I own three hairs on the horse that won,” he said — and he took home what he said was a very small portion of the $6 million purse.

Getting to make a personal appearance at the Breeders’ Cup also allowed Buehler to wear something other than his Dodgers uniform for a change. The 6-foot 2-inch, 185-pound athlete said he likes to “dress pretty simply for the most part,” but also splurges on a few nice things. Among his go-to brands are Barbour and Lavenham for jackets, colored denim from Paige and shirts from State & Liberty and Mizzen + Main. 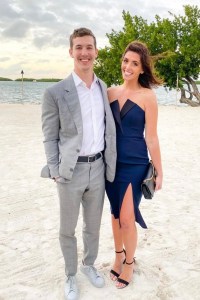 Because baseball players travel so much and live out of a suitcase — a situation exacerbated this year by the pandemic — finding clothes that don’t wrinkle and are comfortable are his primary objectives when shopping. Vuori and Cole Buxton’s essentials definitely fit the bill.

But his “second wardrobe” that he wears at events such as galas, fundraisers and horse races is much dressier. He’s worked with custom tailor Indochino to make him suits and has also used Jhoanna Alba of Alba Legacy in L.A. to dress him for special events, such as the club’s annual Blue Diamond Gala.

Like a lot of other twentysomethings, Buehler also has a propensity for sneakers and he has worked with the Shoe Surgeon on custom designs, including a pair of Air Jordan 1 cleats that he can wear while pitching. The shoes, in Dodger blue and white, sport several custom tweaks including red stitching to replicate a baseball, a T-shirt lining from Cuts and his favorite detail — his signature on the inside of the heel. 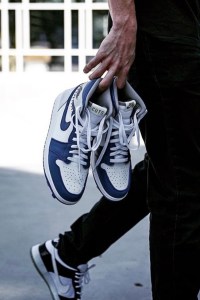 “I’m a big sneaker guy,” he said, adding that in addition to Nikes he also likes Common Projects, Louis Vuitton and Koio. But his most special pair are black Ferragamos with gold stirrups on the back, he said. Buehler also said he’s partial to a pair of dark Hunter green Gucci loafers that he wears on dressier occasions.

He’s also a fan of watches — “Or I’d like to be,” he said. In his rookie year, he bought an Audemars Piguet and rotates the band to keep it fresh.

In addition to the timepiece, there’s usually something else on his arm when he goes out — his fiancée, McKenzie Marcinek, who he’s been dating for more than a decade. Buehler said they’ve set a wedding date — 12-11-21 — and while he still has some time, he doesn’t expect to wear a traditional black tuxedo for the big day. “We’re looking at a different color palette, probably dark, but it could be red, green or gray,” he said.

One thing is sure, though — he won’t be wearing a uniform. During the post-season, Buehler took a lot of ribbing from his teammates, friends and fans because his pants were so tight. Social media sites blew up with observations and speculation of why they fit the way they did. Although he was sensitive to the criticism at the time, he’s laughing about it now.

Like many baseball players, he’s superstitious and last season when he wore loose pants, he didn’t pitch that well, so he opted for a smaller size and his game improved. And like a lot of other people, he said he gained around 10 to 15 pounds during the COVID-19 lockdown, so when he slipped back into the uniform pants he wore last year, they were, shall we say, skin tight. 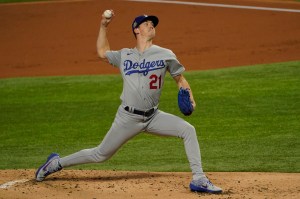 But in light of his stellar performance in the post-season, what will he wear next season? “I’ll definitely go with bigger pants,” he said.

Buehler is considered one of the more-fashionable guys in Major League Baseball since the players have a reputation of not really caring about what they wear — at least not like those in the NBA or even the NFL. For Buehler, he believes it comes down to the length of the season.

Also, unlike NBA players, whose arrivals at an arena as a group have become social media moments, baseball players “trickle in five, six or seven hours before game time, and there’s nobody in the tunnel taking photos.”

Instead, he and his fellow baseball players prefer to focus on their performance over the course of a long season rather than looking at every day “like the first day of school. We wake up, see if something is clean and put it on,” he said.

Although Buehler isn’t sure what’s going to happen with the 2021 season, the baseball calendar historically calls for pitchers and catchers to report to spring training practice in early February. And Buehler expects to be ready whenever that call comes.

After taking a couple of weeks off, “I’m back throwing already,” he said. “I want to balance giving my body a break, but not get stiff or out of shape.”

And he’s looking forward to opening day when the Dodgers will most likely receive their World Series rings. Although he has a couple of championship rings from college at Vanderbilt University that he displays in little ring cases at home, that doesn’t seem appropriate for the large and ornate — and likely, diamond-studded — World Series ring. “It’s got to be something way cooler,” he said with a smile.