After “Steve Jobs,” Watch Out for Sarah Snook

After prominent roles in festival hits "The Dressmaker" and "Steve Jobs," Sarah Snook is ready for primetime. 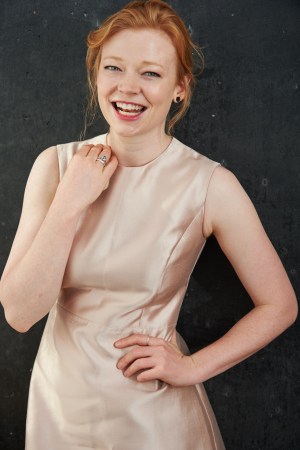 “The jet lag has been the worst,” said Sarah Snook.

The actress was perched on a chair inside her room at the Le Germain Hotel in Toronto during the city’s landmark film festival. She had just flown in from Melbourne to promote the colorful Aussie drama “The Dressmaker,” with Kate Winslet and Liam Hemsworth. And that’s not her only high-profile project to date: the biopic “Steve Jobs” screens Saturday at the New York Film Festival.

In “Jobs,” Snook plays a publicist. But she makes clear that, at 28, she is just now learning the ropes necessary to navigate Hollywood.

“You just have to keep your head down and do your work and hope that audiences respond,” she shrugged, when asked if she’s ready for the potential onslaught of attention that often follows high-profile projects.

In her hotel suite, Snook cut a modest figure. She was not flanked by a stylist or a manager or a publicist, in fact, and was still taken aback by her involvement in the highly anticipated film from Danny Boyle.

“It’s one of those things where I would hope in the future to look back and go, ‘Wow. That was a really interesting moment. That was just the beginning of something,'” she said.

Snook got her start in acting performing at children’s birthday parties.

“You know when you have a party as a kid and your mom hires a fairy, princess, or superhero to come host the party? I was Fairy Lavender,” she said. “I loved it. It was good training for theater.” After scoring small parts on television series and the critically acclaimed Australian drama “Sleeping Beauty,” Snook got her first wave of attention with the Ethan Hawke thriller “Predestination,” a role billed in the credits simply as “the unmarried mother.”

The part won her the best actress prize at the AACTAs, Australia’s version of the Academy Awards, and paved the way for “Jobs” and “The Dressmaker.” Coincidentally, Winslet costars in both films.

“On the first day of rehearsal [for ‘The Dressmaker’], I was sitting there quietly going, ‘Oh my gawd. That’s Kate Winslet. I have to act opposite this person that I remember seeing in ‘Titanic’ when I was 10 or 12.’ It was such a surreal experience,” Snook said. (The film is still looking for U.S. distribution and does not yet have a domestic release date.)

By the time she re-teamed with Winslet — and makeup artist Ivana Primorac — on “Jobs,” Snook said, “It was like seeing old mates. It was such a gift to be around familiar faces.” In fact, she suspects that Primorac may have had a hand in landing her the role as Jobs’ flack, Andrea Cunningham.

“[Primorac] had this weird photograph of me on her iPad, so when she was showing Danny Boyle pictures of Kate, she said, ‘That’s Sarah Snook. You should watch out for her.’ It was kismet,'” Snook recalled.

The actress will return to the boards at the end of the year, for an Old Vic production of Henrik Ibsen’s “The Master Builder” opposite another hero, Ralph Fiennes.

“I’m looking forward to getting back on stage — and terrified as well because I haven’t done that for a while,” she said.

Even so, Snook stopped short of admitting she’s reached a turning point in her career.

“I don’t know if there’s been a big break yet, but maybe there’s one coming. Or maybe it’s a slow burn. And that’s OK,” she said, with a sly smile.