Tilda Swinton issued a to-the-point disclaimer before a screening of her latest flick "Julia." "Don't expect 'Hannah Montana,' " she said. 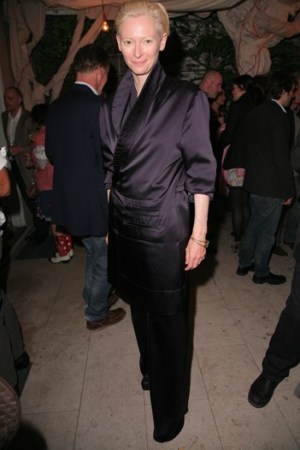 Lest anyone had the wrong idea, Tilda Swinton issued a to-the-point disclaimer before a screening of her latest flick “Julia” at the Tribeca Grand Hotel on Thursday night. “Don’t expect Hannah Montana,” she said.

She wasn’t kidding: In the heart-wrenching drama, Swinton plays an alcoholic ne’er-do-well who kidnaps a young boy and winds up in a small seedy town in Mexico. Not surprisingly, the actress revealed the project took its toll.

“Julia is a wreck and I had to wreck myself to play her,” she said before quickly adding, “but, happily, I’m over it now.”

Afterwards, Allison Sarofim hosted Swinton and guests including Shalom Harlow, Agyness Deyn, Giambattista Valli and Marisa Berenson at her West Village town house. The party got so loud Sarofim’s neighbors hosed down the crowd from over the fence and eventually the cops showed up. Not that that did anything. Later on, Stuart Parr brought out a birthday cake for Sarofim, who gleefully blew out the candles.