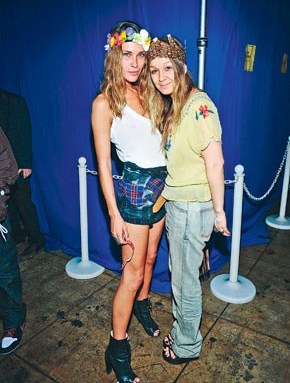 This year was the first time the public was allowed to attend L.A. Art Weekend, but the open invitation to the hoi polloi didn’t drive away the fashion crowd, or the designers themselves, who sponsored parties all over town. And perhaps predictably, the “weekend” actually began three days early, with a party on Wednesday at artist Jorge Pardo’s Mountain Bar in Chinatown to fete the May 14 release of his monograph by Phaidon Press.

By Friday, things had kicked into full gear as a bold-faced crowd gathered at Barney Greengrass for Julie Gilhart and Tomas Maier’s dinner for documentary filmmaker Albert Maysles’ coffee-table book, “A Maysles Scrapbook.” The restaurant was glitzed up with white linens, lots of flowers and a menu that included herb-crusted halibut and spinach-stuffed chicken, to the disappointment of at least one guest. “I was kind of looking forward to bagels and lox,” said Lisa Hoffman, who came with her husband, Dustin.

Also in the crowd were China Chow, Liz Goldwyn, Kate and Laura Mulleavy, Diane Keaton, Kelly Lynch and Linda Evangelista, who, as usual, was waxing poetic about the designer of her outfit. “He gets luxury right,” she gushed about Maier.

After dinner, Laura Mulleavy and Goldwyn headed to the dance club Echoplex, where Benjamin Cho and his BFF, Leo Fitzpatrick, were DJing the party hosted by Opening Ceremony. In the crowded dance hall were an abundance of locals, including Jeremy Scott, Erin Wasson and actress Jena Malone. Tight security at the door assured that not everyone managed to get in: To the amusement of many, underage blogger Cory Kennedy showed up with a fake ID and was promptly turned away.

The next day, Cecilia Dean and Whitney Biennial curator Shamim Momin showed up for brunch on the patio behind Maison Martin Margiela before a tour of the agricultural art installation site Farmlab. REDCAT director Clara Kim, whose gallery was sponsoring the affair, saw nothing strange about partnering with a designer. “Most artists appreciate the conceptualism of Margiela,” she shrugged. “We’re fans.”

Over at Royal/T, in Culver City, there was lots of fashion conceptualism going on. There, Phaidon was hosting a party for photographer Masayuki Yoshinaga’s latest book, “Gothic & Lolita,” which captures the tutus, corsets and Victorian lace made popular by all those Gwen Stefani-inspiring Harajuku teenagers. Life imitated art as partygoers donned their own kawaii looks. One fellow came in a skirt adorned with a map of Kansas. In case that wasn’t enough of a statement, he brought a stuffed animal, too. Nearby was a young woman with a panda tattoo on her leg.

But Katherine Moennig of “The L Word” said jeans and a T-shirt were just fine for her. “They’re nuts,” she said of those wearing the wackiest ensembles. “But I can appreciate it.”

His muse would definitely have approved. “He was so devoted to beauty,” Gn said of Wilde. “He would have loved this.”