For the Love of ‘West Side Story’

The new production of “West Side Story” on Broadway, which opens tonight, offers 7 p.m. showings twice a week — Tuesdays and Thursdays — which gives the actors an additional hour of postshow free time, up from the usual 8 p.m. start time.

It’s Friday morning — Valentine’s Day, a fitting time to talk to two romantic leads — and Shereen Pimentel and Isaac Powell, who play Maria and Tony in the new version, are comparing how they spent their Thursday night. Specifically, what they had to eat.

“We went to The Distillery and everyone had chicken and waffles, and I had a skirt steak and sweet potato fries,” Pimentel tells Powell, who has produced a pink carton of chocolate-covered pretzels for snacking. “It was the best thing. And I got a Manhattan that had a piece of bacon in it,” she adds. “It was wild.”

“I ate an entire pizza by myself.”

It feels odd to say the two are adorable together, given the gritty, powerful, far-from-adorable nature of the “West Side Story” revamp, but they are. There is a sweetness between them, one both rooted in their youth (Pimentel is 21, Powell is 25) and in their genuine bond, so viscerally brought to life each night on stage. 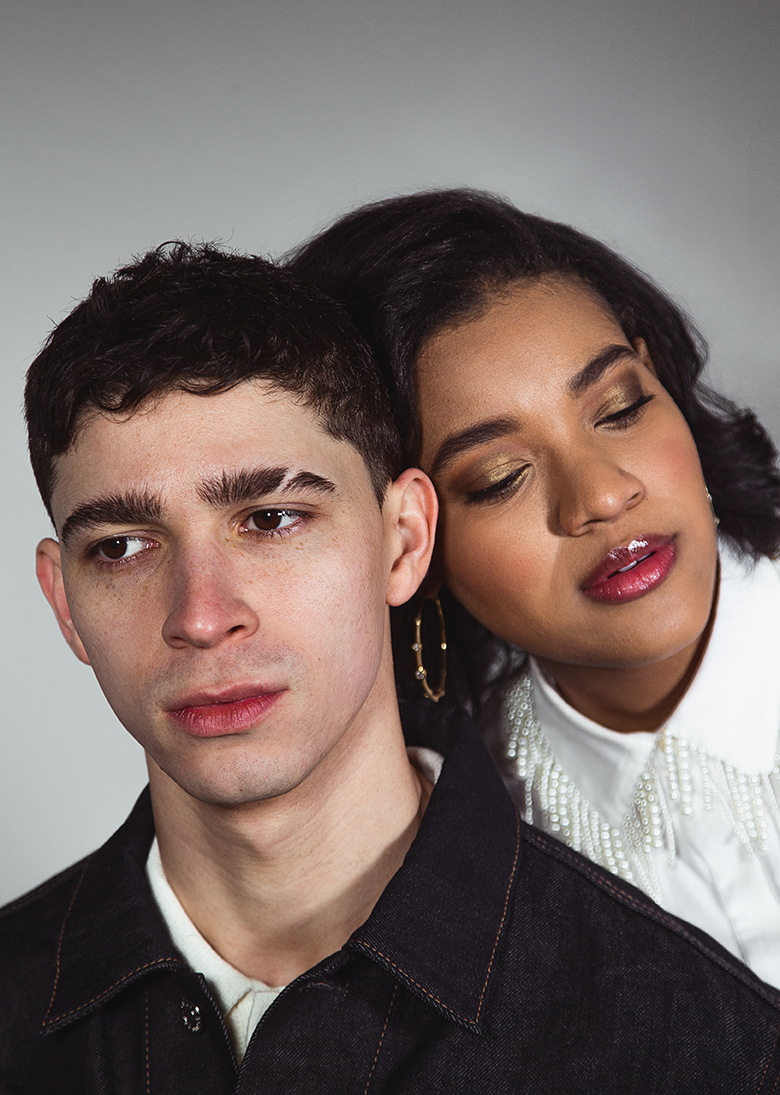 The new “West Side Story” clips along at an hour and 45 minutes, an intense ride with no intermissions. It’s as startling for the actors as it is for the audience, the duo say.

“It feels like it goes hyperspeed. It has so much momentum to it, innately, which I think is what they tried to do,” Powell says. “And taking out intermission, it doesn’t really give you any time to disengage from the story.”

“I like to say you hop on the train and it stops at the end,” Pimentel adds. “That’s it, that’s its final stop.”

The days leading up to the opening are business as usual for the two leads, who have been locked into their routine now for months, even as the show swirls around them with changes and developments.

“Especially for the two of us, our show has been in its final form for a while. The changes have mostly been happening around us,” Powell says. “So I feel very comfortable going into this week. I’m excited, and of course nervous. Feeling all of the feelings about doing this thrilling thing.”

“I think we’ve made something so real and so exciting,” Pimentel says. “But I think it’ll be so exciting for the audience to watch and see what we’ve made. So mostly for me, I’m excited for people to come.”

Pimentel was the final principal cast member to be cast in the production, in July 2019; Powell was cast the previous December.

The pair met about a month after she was cast; they share the same agent and so were put in touch, and went out on a “little date of sorts,” Powell says.

“We went to Shereen’s favorite ramen place and we got ramen, and then got dessert. We stopped in Times Square and got waffles.”

Armed with waffles they ventured over to the Broadway Theatre to see if the marquee was up, a few weeks prematurely (when it did finally go up, Powell was on site live texting the progress on a group chat, while Pimentel was stuck in class at Juilliard, dying to go over and see).

The night of their date, though, they rather wholesomely tried to get into the theater, to no avail.

“We were ringing the stage doorbell,” Powell says with a laugh. “No one came to let us in.”

A handful of months later and their faces have been plastered all across New York, on TV ads, in newspapers and billboards galore (surely someone would let them into the theater after hours now). The show is one of Broadway’s most anticipated, and previews have been sold out.

“I think everyone feels very strongly about whatever their opinion is,” Pimentel says of the show’s response thus far. “I think that that’s what’s most important in what we’re creating, is that there’s no place to be complacent. And that it has really pushed people to think and to form a very strong opinion about it.”

“It elicits a passionate response one way or the other,” Powell adds.

Pimentel, who is in her last semester at Juilliard, got her start in theater “backwards” — that is, dance first. Born in Manhattan and raised in New Jersey, she danced at Alvin Ailey as a kid and thought that was what she wanted to do when she grew up. She saw “The Lion King” on Broadway when she was eight, fell in love, and by the time she was nine was playing Young Nala in the show.

“My mom said, ‘if you can figure out how to make it happen, then I’ll try to help you’ — and I somehow did,” she says.

Growing up in Greensboro, N.C., Powell’s sister was babysitting a few girls who were involved with the community theater. He was around 12 years old, it was summertime, and “I didn’t really have anything else to do,” he says. So he tried out for the production of “The Wizard of Oz,” got in, “and I just didn’t stop.” 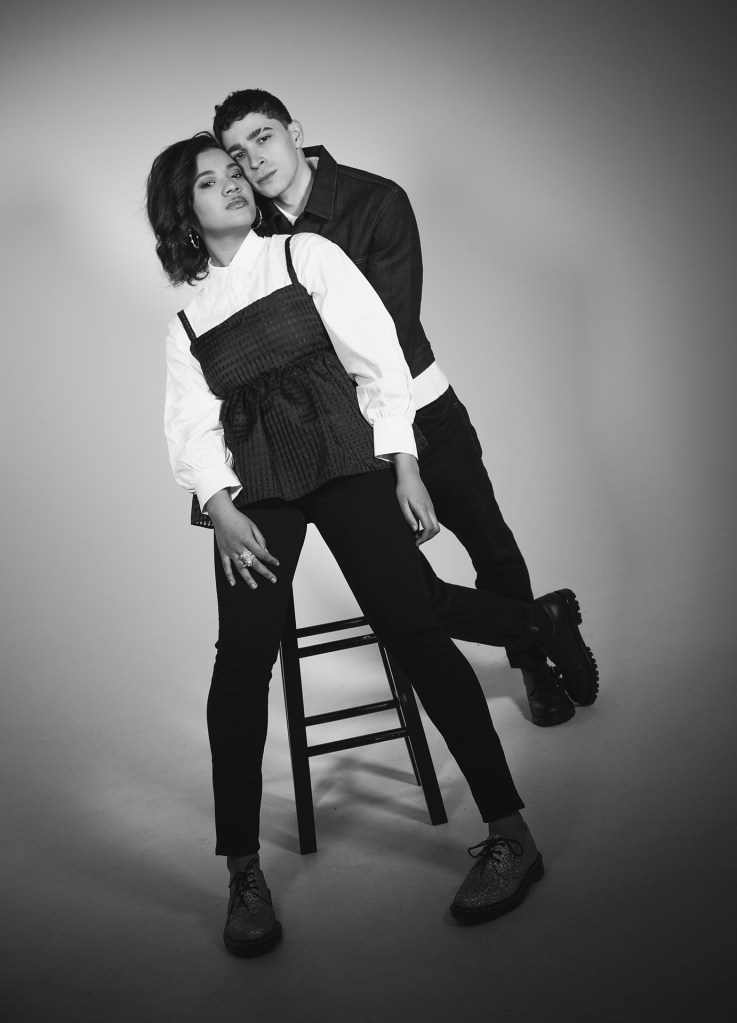 He attended the University of North Carolina School of the Arts for their boarding program for his final year of high school, continued on to get his bachelor of fine arts degree there, and was cast in “Once on This Island” on Broadway not too long after that, his most recent role before “West Side Story.”

“I think I’ve always been drawn to the role of Maria and the show ‘West Side Story,’” Pimentel says. “I was drawn to it being revived and I was drawn to being able to tell the story as a Puerto Rican woman and also as a woman of color. To be able to tell that and be able to show that there are so many facets of Hispanic women. And we all look different. And that somebody like me, who I don’t think is the traditional ingenue all the time, could still play this role and still bring a lot to it.”

For Powell, Tony was never on his dream roles wish list, but the creative team behind the revived production was what drew him in.

“I knew from the day that this project was being announced that I wanted to work with these people,” he says. “I didn’t think there was a part for me in the show, but I wanted so badly just to be part of this process in some capacity.”

In addition to performing, Powell is signed with New Pandemics modeling agency and appears in the new Helmut Lang campaign. Fashion, he says, is a passion, but he’s not leaving the stage for modeling anytime soon.

“Modeling was sort of a way for me to get involved in fashion, but hopefully I can sort of partner with friends and be involved in a capacity that’s a little bit more than just posing for pictures,” Powell says.

Much like their motivations for joining the production, their methods of preparation varied: Powell was researched, while Pimentel went personal.

“Mine was mostly talking to friends and colleagues and my own family about Hispanic culture, and looking into making sure that Maria is played authentically,” Pimentel says. “And a lot of it also was trying to bring out a part of Maria that’s never brought out, which is a stronger side with a lot more determination and strong will in her. A lot of kind of shaking off the old notions of who she’s supposed to be and letting her be whoever she wants.”

Powell, meanwhile, wanted to make sure he had an understanding of gang violence in New York and of the psychology behind pack mentality, of “what makes Tony leave the gang in search of something more for his life,” he says. “The falling in love stuff is easy. Especially when you’re working with someone like Shereen. All that stuff is something that you find in the room.”