What The Ladies of Wimbledon Are Wearing 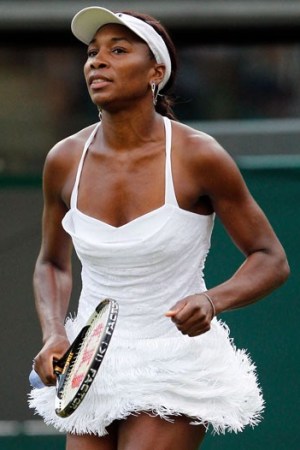 The ladies at Wimbledon may be competing for the championship title, but they also seem to be vying for most fashionable player. Maria Sharapova collaborated with Nike on her Lawn Rose dress, inspired by English rose petals and made from stretch jersey and mesh. And Caroline Wozniacki — ranked fourth in the world — has been sporting Stella McCartney for Adidas for the second Wimbledon season running. In her singles matches so far, she’s worn McCartney’s Tennis Performance dress, which has a printed and embroidered floral motif on the front. But Venus Williams leads the pack for the most outrageous number (outrageous at least for the buttoned-up British tourney) in a fringed, layered dress of her own design. “I call it my shimmy dress,” the number-two seed said last week, adding the frock was inspired by Tina Turner. Talk about ballsy.