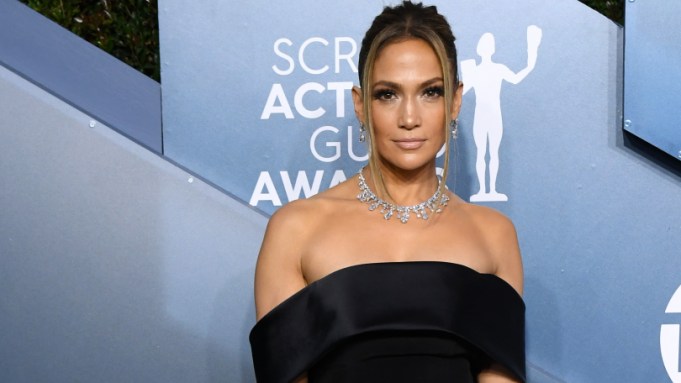 “I’m very contagious so make sure you guys Purell up,” said Brad Pitt when he stopped to chat with reporters at the 26th Screen Actors Guild Awards. He was under the weather, he shared. “Why do you think I’m wearing this coat, man?” It didn’t stop him from being in high spirits, though, and for more reasons than one. “My Chiefs won,” he said of the Kansas City Chiefs, who are heading to the Super Bowl. “I’m pretty happy about that.” During the award ceremony, the actor brought the loudest laughs of the night when he accepted Outstanding Performance by a Male Actor in a Supporting Role for “Once Upon a Time in Hollywood.” “I gotta add this to my Tinder profile,” he joked, admiring his trophy. “I want to thank my costars, Leo[nardo DiCaprio], Margot Robbie, Margot Robbie’s feet, Margaret Qualley’s feet, Dakota Fanning’s feet. Seriously, Quentin [Tarantino] has separated more women from their shoes than the TSA.…Let’s be honest, it was a difficult part, a guy who gets high, takes his shirt off and doesn’t get on with his wife. It was a big stretch.” Jennifer Aniston smiled and clapped as she watched from the audience. Backstage, when asked to elaborate on how much his personal life is integral to his work, Pitt said, “I make everything personal, to a fault.”

When it was Aniston’s turn to take the stage, receiving Outstanding Performance by a Female Actor in a Drama Series for “The Morning Show,” Pitt gazed attentively from a TV screen backstage. “Adam Sandler, your performance is extraordinary, and your magic is real, buddy. I love you,” the actress ended her speech, calling out Sandler’s “Uncut Gems” snub. Visibly moved backstage she shared: “I’m shaking. I did not see that coming at all, so it’s very exciting. I’m overwhelmed.” Of the TV show’s significance during the #MeToo era, she said, “I feel like I’m so honored to be a part of a show that is beginning the conversation and the dialogue of an issue that affects each and every one of us all across the world. It has really been an extraordinary experience to explore that and also a very delicate task to take on.” A role she would love to play? “Wonder Woman, but I waited too long…I want to do more comedies, though, god. I’m ready to have some laughter.”

“There’d always be two other guys I was up against, and we’d always lose to this one kid,” shared Joaquin Phoenix — who took home Outstanding Performance by a Male Actor in a Leading Role for “Joker” — recounting his experience of auditioning growing up. “No actor would ever say his name, because it was, like, too much. But every casting director would whisper it. And they’re like, ‘It’s Leonardo. It’s Leonardo.’ Who is this Leonardo?” Turning to DiCaprio on stage, he continued, “Leonardo, you’ve been an inspiration for over 25 years to me and so many people.” Addressing the other nominees in the category, too, Phoenix told “Ford v Ferrari” star Christian Bale: “You commit to your roles in ways that I can only dream of. You never turn in a bad performance. It’s infuriating. I wish you would, one time. Just suck once.” He praised Adam Driver of “Marriage Story” for his “beautiful, nuance, incredible, profound performances” and told Taron Egerton, who plays Elton John in “Rocketman,” that he couldn’t wait to see “what else [he’d] do.” In the end, Phoenix concluded: “Really, I’m standing here on the shoulders of my favorite actor, Heath Ledger.” Before his death at 28 years old, the late actor had played the Batman super villain in “The Dark Knight.”

“It makes me very happy to know that my next job is working with you and Marty,” Robert De Niro told DiCaprio — who received yet another shout-out — referring to Martin Scorsese’s upcoming “Killers of the Flower Moon” as DiCaprio presented him with SAG’s life achievement award. “At least I know I’ve got another year of health insurance.” The 76-year-old actor, who received a standing ovation, used the platform to get political, sharing: “Leaders who support unions are more likely to support Affordable Care Act, equitable taxes, humane immigration regulations, a safe environment, a diverse citizenry, reproductive rights, sensible gun control and fair wages and benefits. We owe them our support, and we owe them our vote. I can imagine some of you are saying, ‘Let’s not get into the politics.’ But we are in such a dire situation that is deeply concerning to me, and to so many others, I have to say something.…There’s right and there’s wrong, and there’s common sense and there’s abuse of power, and as a citizen I have as much right as anybody — an actor, an athlete, a musician, anybody else — to voice my opinion. And if I have a bigger voice because of my situation, I’m going to use it whenever I see a blatant abuse of power.”

“He’s the titan of our industry,” said “The Marvelous Mrs. Maisel” actress Caroline Aaron on the red carpet — which was in fact silver. De Niro was steps away. “It’s pretty thrilling,” she said of working on the Amazon Prime Video show, which received Outstanding Performance by an Ensemble in a Comedy Series. She turned to a reporter who was on her phone. “I can tell how young you are by how fast you text,” Aaron told her. “I need to up my texting speed. My children, their fingers are like the wind.”

Costar Luke Kirby — who received an Emmy Award for Outstanding Guest Actor in a Comedy Series for his work in “The Marvelous Mrs. Maisel” — couldn’t quite remember what designer he was wearing. “It’s Armani,” he said half-jokingly, taking a look at the tag inside his suit jacket. And the brooch? “They’re lovebirds. It’s from Beladora. It’s a local vintage and estate jewelry store that I tend to pull some things from.” Backstage, when asked how life may have changed for the cast, actor Michael Zegen shared: “I get asked at the supermarket why I’m there. I’m hungry.”

“Knowing where to go from here, I feel a little bit stuck,” shared Michelle Williams when it was her turn to head backstage. She received Outstanding Performance by a Female Actor in a Miniseries or Television Movie for Fosse/Verdon, where she plays actress and dancer Gwen Verdon. “I don’t really know what to do next. I haven’t worked since. I haven’t taken a job since. I don’t have a job for the next year. I mean, I have something else I have to go do, so I’ll be busy at home. But it’s a hard act to follow.”

“I’m a little embarrassed feeling like we’re the parasites of Hollywood now,” joked “Parasite” actor Lee Sun-kyun alongside director Bong Joon-ho and costars Park So-dam, Choi Woo-shik, Song Kang-ho and Lee Jeong-eun. The film made history as the first foreign language film to win Outstanding Performance by a Cast in a Motion Picture. It’s been gaining momentum for the Oscars — where it’s nominated for Best Picture — after receiving the Palme d’Or at Cannes and Best Foreign Language Film at the Golden Globe Awards and Critics’ Choice Movie Awards. “Hopefully with this opportunity and with the success of ‘Parasite,’ various film industries across the world can coexist together.”

Impossible to miss in her neon orange Valentino gown was “Big Little Lies” and “The Society” actress Kathryn Newton, who teased that the SAG Awards would be her “last event of 2020.” She’ll soon be busy working on the second season of the Netflix TV series, but before that, she begins shooting a film next month. “It hasn’t been announced yet,” she said of the latter. “But I can say, I’ll be in Alabama for two months.”

“Single file, children!” exclaimed 11-year-old Iain Armitage, who joins Newton as one of the many offspring in the HBO series. He arrived with Darby Camp, Ivy George and Nicholas and Cameron Crovetti, all young actors from the show, as they made their way to the press line. “Single file!” Wise beyond her years is actress Chloe Coleman, also 11, who plays Zoë Kravitz’s daughter. “Something that really stands out with ‘Big Little Lies’ is the women empowerment theme,” she said in a Burberry suit. “Having these women going through these life problems and going through it together and everything they deal with, it’s inspiring. I love that it centers on women.” She’ll next appear in the upcoming romantic comedy “Marry Me,” starring Jennifer Lopez.

Also in a suit, a creation by Dsquared2, was DiCaprio’s 10-year-old “Once Upon a Time in Hollywood” costar Julia Butters. Every bit as poised as Trudi Fraser, the child actor she plays in the film, she shared that there was a particular moment that she rehearsed over and over again with the actor. “The knee pat,” she said. “When I pat his knee when I’m down and comforting him, he wanted to get that right. We rehearsed it so many times.”

“This is from West Africa,” shared “The Handmaid’s Tale” actor O.T. Fagbenle of his outfit, a gift from his father. “It’s called an Agbada. Often in Nigeria, it’s our version of a suit. It originates in the Songhai Empire, which was one of the great African empires.”

“I’m surprised we’re even nominated,” said “The Handmaid’s Tale” costar Madeline Brewer in Monique Lhuillier. “We’re nominated, and ‘Succession’ is in the category. I mean, it blows my mind. I love ‘Succession.’ There are so many shows I love. This is the award that’s the most important. It’s your peers. It’s your peers voting for who they think deserves the little man statue.”

“Thank you so much for your sacrifices,” Scarlett Johansson, in Giorgio Armani Privé and with Colin Jost in tow, told a representative of the U.S. Army, which was present on the carpet this year in celebration of its anniversary. “We appreciate you.” Moments earlier, Christian Bale had done the same. “Happy Birthday,” he told a group of soldiers. “How many years are you celebrating? 245?” Jennifer Lopez, wearing custom Georges Hobeika, and Alex Rodriguez stopped to take selfies with some of the soldiers, as did a slew of Hollywood faces including DiCaprio, Phoenix, Driver, Pitt, Jennifer Garner, Jane Lynch, Nicole Kidman and Tom Hanks.

“It’s the most deeply touching love story,” said Jenna Lyons. The former J. Crew president and creative director was referring to Megxit, the term being used to summarize Meghan Markle and Prince Harry’s decision to step down as working members of the royal family. Lyons will soon be seen in an unscripted TV series airing on TBS and TNT — which broadcasted the award ceremony. “The show is following me while I incubate what my new business is going to look like,” she said. “It’s fashion but also home and beauty. It’s been fun and exciting and a little terrifying, maybe a lot terrifying.”