Party Politics: Where Scenesters Will Watch the Election

Social scenesters told WWD where they’ll be when the election night returns come in. 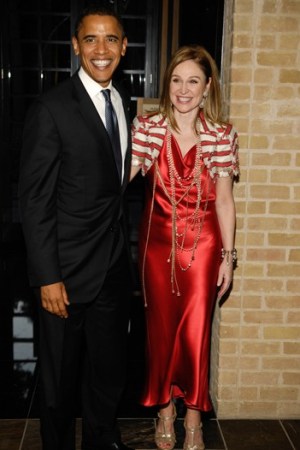 Tonight, the charity circuit screeches to a halt, party planners get a night off and a television becomes the hottest accessory. Social scenesters told WWD where they’ll be when the election night returns come in.

Wendi Murdoch: I will go to two election parties with family (Rupert, his daughter Elisabeth and her husband Matthew Freud), and friends (Ivanka Trump and Jared Kushner). The two parties are the Fox News party at the office, and an election party at Richard Plepler’s house with friends Gary Ginsberg and Caroline Kennedy.

Julie Macklowe: Taking my daughter Zoe to vote (She’s one, so it’s her first time!) Then I will most likely be glued to the screen after a quick bite to eat. I am a proud Obama supporter and will be planning where to move if McCain gets elected. Paris?

Rachel Roy: I am taking Ava, my eight-year-old, to the polls with me in the morning. She has been using her Runway for Change pieces and wearing an Obama pin every day for the last three months so tomorrow is just as important for her as it is for me. Then it’s just dinner and drinks with friends at home, watching the polls until Obama is announced the winner — and, of course, Ava gets to stay up until it is official.

Victoria Traina: I’m going to my sister Vanessa’s place for dinner and a night of CNN.

Tinsley Mortimer: We will be preparing for probably the most important night in political history for our generation. Family and a few friends are coming over for a small election night dinner party. We plan to be glued to the TV until the very end.

Jennifer Missoni: I’m actually going to be in acting class tomorrow night, so I’ll be tracking the news via my iPhone.

Ivanka Trump: I will be watching the election coverage with Rupert and Wendi [Murdoch] at the News Corp. screening room.

Celerie Kemble: Watching the initial returns with [New York State] Sen. Malcolm Smith, an old friend (who is now possibly going to become the Senate Majority Leader). Then casual dinner with a dozen friends in front of the TV. Plan to rub it in for the one McCain fan at our table. Unlike last election, expect to turn in early.

Lisa Airan: I am actually in Maui for vacation this week. We will watch the election results with our friend Peter at his house overlooking the Pacific Ocean. I voted absentee.

Nina Griscom: We are in the glued-to-the-TV mode. May have some friends stopping by — I am going to make a cassoulet and a salad and pray that Obama wins.

Jennifer Creel: I will be at home with my children and a few good friends having dinner and watching TV. It should be very interesting night.

Debbie Bancroft: My 12-year-old daughter, Serena, has become her school’s sixth grade political activist, partly due to Mom’s interest, but largely because of her own consumption. She follows polls, the news, editorials, and has expressed her preference on our apartment windows, all outerwear, and on the dogs, till I reluctantly drew the line. At a Halloween party, she defended her candidate against several boys, while her usually vociferous girlfriends rolled their eyes, and sighed, “Ohhh, Serena.” Long way of saying I am staying home, with the most rapt, sincere, bravest citizen, to watch history being made.

Becca Cason Thrash: I’ve been sick as a dog the last two days and we’ve decided to take in the election night under the covers in our jammies with caviar and Dom Perignon. If Barack wins, and I think he will, we will host a free party for all of the people who came to our July 30th fete who paid the maximum, $28,500 per person, for that event.

Helen Schifter: We are staying home and watching the returns with our daughter, Storey. She is studying American government — the electoral college, the Constitution, etc. — this year in history class, so our family has been reading, dissecting and discussing. We are making T-shirts to wear tomorrow night that say “Barack is my homeboy.”

Bettina Zilkha: I’m in Buenos Aires, voted by absentee ballot, and I’ll find out who won on CNN.

Kathy Freston: I will be spending election night at the Proposition 2 Party in Los Angeles. I am hosting it, along with Wayne Pacelle (chief executive officer of Humane Society U.S.) and Gene Baur (chief executive officer of Farm Sanctuary). It’s on the California ballot. If it passes, it would ease the extreme confinement of factory farmed animals in California. Oprah devoted a whole show to it because I sent her a Nicholas Kristof [New York Times] op-ed piece on farmed animals and Ellen [DeGeneres] also did a segment on it with Wayne. It has gotten huge attention, and I think (hope, pray) it will pass.

Charlotte Ronson: This is my first time voting. Once I get home I will be glued to the TV. Eek — it’s so exciting and nerve-racking.