The 22-year-old, wearing Prada, is the first National Youth Poet Laureate and stole the show at Wednesday's inauguration.

Youth Poet Laureate Amanda Gorman, in Prada, speaks at the inauguration of U.S. President Joe Biden on the West Front of the U.S. Capitol on Jan. 20, 2021, in Washington, D.C.

At 22 years old, most young Americans are completing college, applying to jobs and wondering where their futures will lead them. Amanda Gorman, on the other hand, had already inspired the entire nation, become a breakout internet sensation, and still has an incredibly bright future ahead of her. Joining the ranks of Maya Angelou, Robert Frost and Elizabeth Alexander, Gorman is the youngest inaugural poet ever in the United States.

The Los Angeles native, who made history as the first National Youth Poet Laureate, up and stole the show at the inauguration of President Joe Biden and Vice President Kamala Harris with her message of light and hope (and the internet: in a few short hours her Instagram following has gone from 220k to 1 million). She brought to life the messaging of the poem she read, “The Hill We Climb,” through her bright clothing. For the occasion, Gorman wore a look by Prada: a  double-breasted natté toile coat, white poplin shirt, black leather pencil skirt, black Saffiano leather pumps and, the scene stealer, a red satin headband.

She grew up in Los Angeles and was named the Youth Poet Laureate of Los Angeles in 2014 after entering her work in local writing contests. In 2017, she became the first U.S. National Youth Poet Laureate. She reportedly landed on the Bidens’ radar that same year when she read her poem “In This Place (An American Lyric) at the Library of Congress; Jill Biden is said to have reached out to her in the lead-up to the inauguration about writing and reading a piece at President Biden’s swearing in.

“The Hill We Climb” was an original piece that quickly jumped onto Instagram captions and tweets. She finished working on the poem after the attack on the Capitol two weeks ago, which left five people dead.

“If we merge mercy with might and might with right, then love becomes our legacy,” she told the crowd at the inauguration. 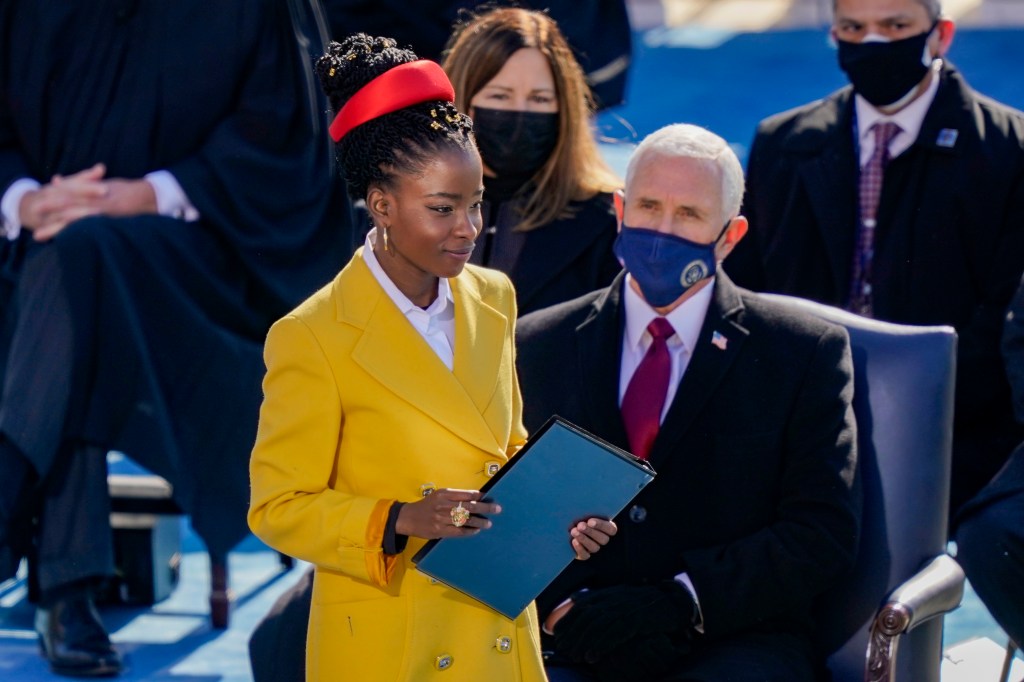 Poet Laureate Amanda Gorman, in Prada, prepares to speak at the inauguration of U.S. President Joe Biden on the West Front of the U.S. Capitol on Jan. 20, 2021, in Washington, D.C.  Courtesy of Getty Images

More from the Inauguration:

What to Know About Markarian Designer Alexandra O’Neill