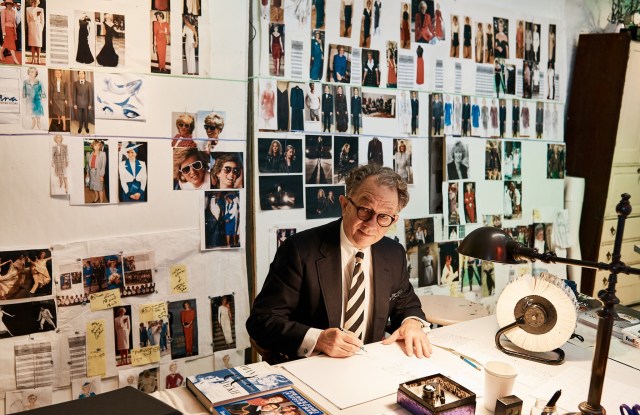 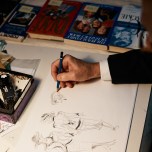 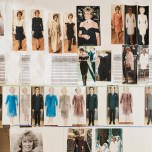 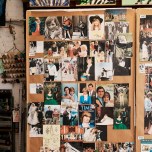 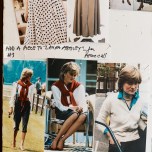 “I could retire on this if I sold it,” says William Ivey Long, plucking one of the many books blanketing his work table in the middle of his TriBeCa design studio in Manhattan. He flips open the prized possession: a catalogue for the sale of Princess Diana’s dresses in New York, two weeks before she died.

The book recently proved useful as a reference when designing the costumes for “Diana,” a new musical about her life making its way to Broadway after an opening run last year at the La Jolla Playhouse in California. The show marks Long’s 76th Broadway production, and it is the only job he campaigned to get.

“I don’t usually throw myself at the feet of the director,” Long says, dressed in his standard tailored attire of khakis and a jacket. “I read in the newspaper — someone announced they were doing a Princess Diana musical, and I just went crazy because I’m a huge fan boy.”

He called the show’s director, Christopher Ashley of “Come From Away” fame, and asked him to stop by the studio when he was in town. They’d already worked together on six shows, and Long is one of the most in-demand theater costumers. He’s won six Tony awards and been nominated for 15 — so the deal was likely sealed before Ashley walked into his studio and saw the boards of research that Long had already done, or glimpsed his collection, decades in the making, of Princess Diana books and royal family memorabilia. The costumer is such a fan that he’s amassed multiples in his collection, including four of the same pop-up book — and that’s before the musical even existed.

“Total dream job,” Long (who started his career as an apprentice for Charles James, after reading about the designer in WWD) enthuses of his work on the show. “But then the hubris sets in, and the fear of not living up to it. So I’m at that level right now — the joy hasn’t returned to Mudville,” he adds. “You never have fun on a Broadway show until you’re doing the London production.”

He’s been working on “Diana” for more than two years, and is both ready (and nervous) for it to start playing for the New York crowd on March 2. The show has a few elements of synchronicity already: opening day is March 31, the same day Harry and Meghan will officially drop their royal titles. Who knows? Maybe they’ll drop by New York for a performance.

“What we did in La Jolla was one thing,” says Long. “We’re now in the city where people knew her, friends of hers live here.” Case in point: Long sat next to one of those friends, Jane Churchill, at an event a month ago. “Boy, she was picking my brains. And all I said was, ‘I hope you love it!'”

Research is the cornerstone of Long’s design approach (he also credits being a Virgo). He works closely with a design associate, Butler Robertson, and together the pair are practically encyclopedic in their royal sartorial knowledge, which dominates the room. (A collection of “Beetlejuice” canvases are also displayed from his work on the show, the juxtaposition testament to Long’s range as a designer.) Boards with archival imagery are labeled and propped around the room, some with notes on specific looks that were re-created for the show. His fashion sketches for Diana’s costumes — dominated by shades of red, white and blue — are also prominently displayed. 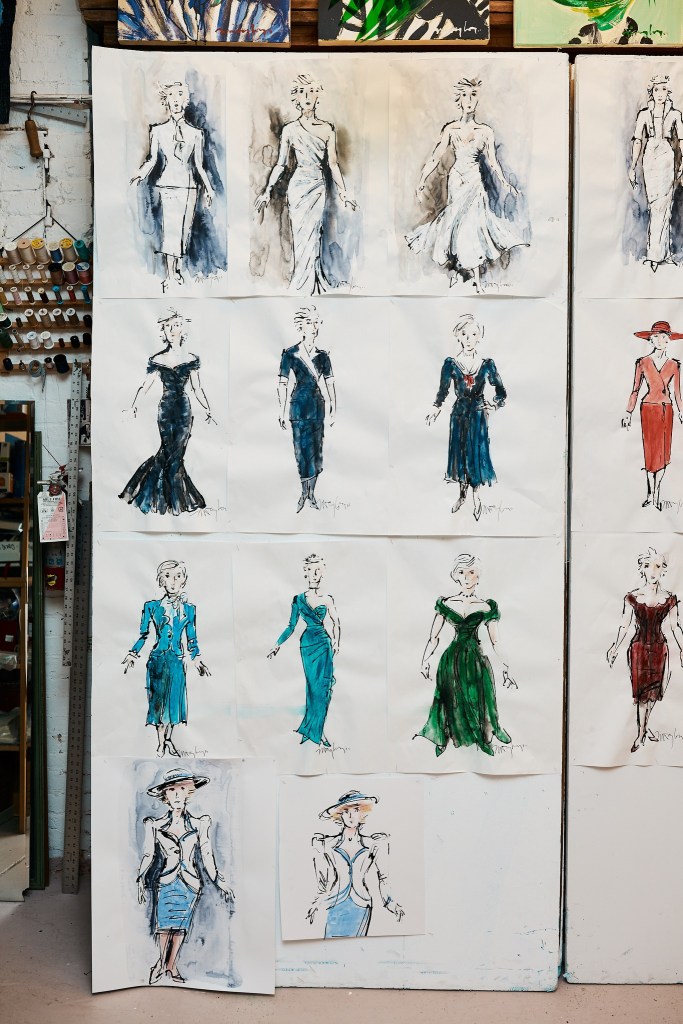 The musical follow Diana’s life from age 19, when she met Prince Charles, until her untimely death on Aug. 31, 1997. Long describes “Diana” as a folk opera: it’s a tale of innocence, betrayal, disappointment, highs and lows, disaster and then posthumous triumph.

Designing the costumes required him to navigate ideas of recollection and memory, and there is some revisionist history at play. “I realized I needed to soften and make a glow around all these classical looks — they’re classical because we recognize them,” Long says. Some design elements — shoulder pads, oversize silhouettes — that made sense in the Eighties and Nineties might read comical today, but people most remember the “wow” factor they felt when they first saw the royals don their outfits. Long’s job was to distill the defining elements of those looks — the essence of what people remember — but update them for 2020, and for lead actress Jeanna De Waal’s body.

“I think that’s the point: they’re really beautiful clothes, made to fit a certain person,” he says. “The idea is every time [Diana] appeared in public she looked gorgeous. I’ve shifted some of the proportions so when she comes out, every moment is beautiful, and it’s to the 2020 eye.” 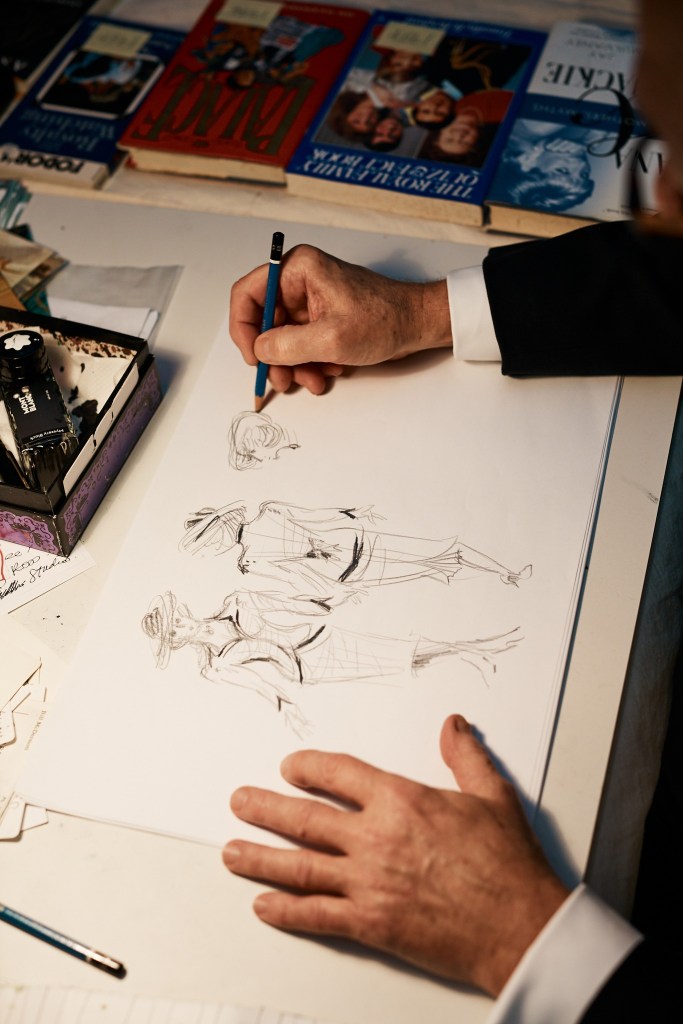 William Ivey Long sketching a look from the show.  Weston Wells for WWD

He created 35 custom costumes (the shoes and tiaras are custom, too) for the role of Diana, paying homage to the original designs; he applauds those designers in his Playbill bio: Catherine Walker, David and Elizabeth Emanuel, Jan Van Velden, Bellville Sassoon, Christina Stambolian — who designed the infamous black “revenge” dress.

Of course, there are a few other characters involved in Diana’s story onstage, and they all needed costumes, too.

“Charles is referred to by Camilla as a man in a suit,” says Long, who worked with an Italian tailor to create custom double-breasted suits; he also sourced a re-creation of Charles’ wedding uniform from the Angels and Bermans costume house in London, which had one on tap thanks to their work on “The Crown.” For Queen Elizabeth, Long created 10 looks, drawing on timeless design and jewel tones — blues, purples, reds.

“Camilla is the real discovery. I think people are going to be blown away.” In the show, Long dresses her in “upper-class country” plaid and tartan looks, including two-piece suits. While the photos of Camilla tacked on the research boards in his studio often show her scowling, the show aims to present her in a different light. “I channeled it so when we see Camilla, we’re seeing her through Charles’ eyes. So at all moments, she’s absolutely beautiful,” says Long. “She comes off really smart, really knowing and totally supportive of Charles. There’s nothing negative about that.”

The ending of the story is of course tragic, even when filtered through optimism. But it’s a story that many will never forget.

“That is another thing that 2020 can do for you, because you look back at it, Prince Charles and Camilla are very happy, they’re cooking with gas, it’s all working; the Queen of course is the most respected person on the planet, and Diana has become a saint. So these are interesting results, but how to get there, a lot of sturm und drang. German for, ‘it should be an opera.'” 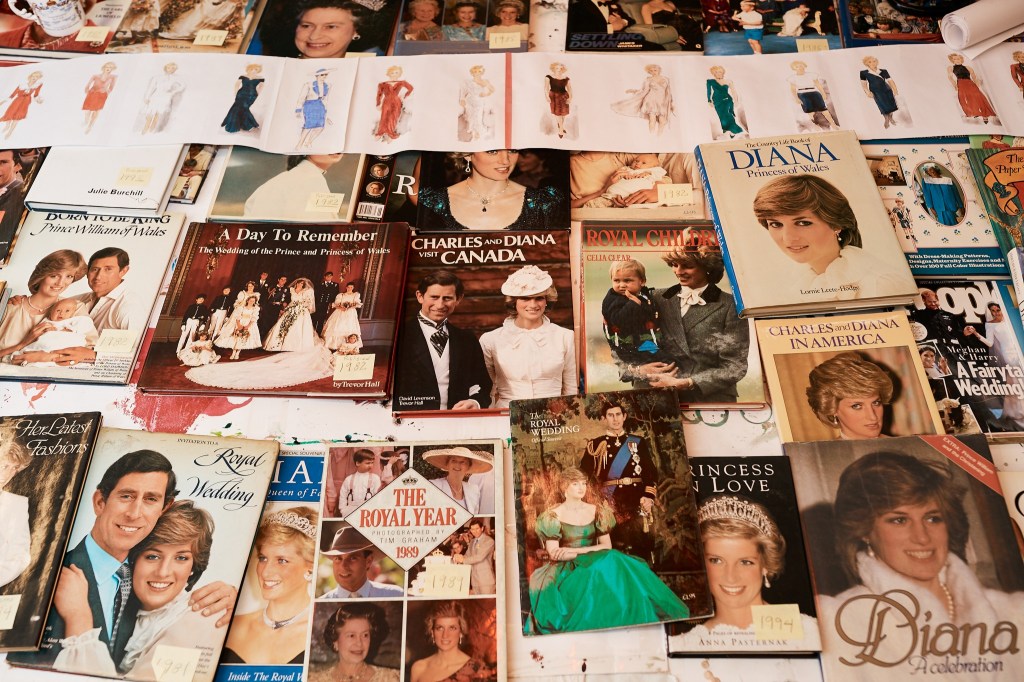 For the Love of “West Side Story”

Give the People Sparkles: Inside Mariah Carey’s Vegas Residency Wardrobe