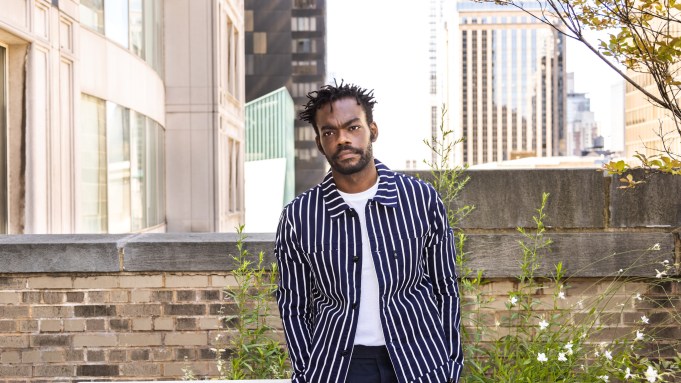 When William Jackson Harper first read the script for “The Resort,” he had many questions. Set on a tropical resort, the story bounces between two timelines and is difficult to categorize — and that ambiguity appealed to Harper.

“Is it primarily a relationship drama or is it a dark comedy or is it an adventure?” says Harper, who stars in the new Peacock series opposite Cristin Milioti. “The thing that drew me to it was that it was weird.”

The series was filmed this past spring, and is being released several months after wrapping, a quick turn-around that Harper describes as “a fever dream.” The premise was cocreated by Andy Siara, who wrote Sundance comedic hit “Palm Springs” (which also starred Milioti) and “Mr. Robot” creator Sam Esmail. In “The Resort,” a young couple, played by Milioti and Harper, find themselves on vacation and entangled (by choice) in an unsolved mystery.

“It deals with this quotidian adult problem of when you’re in a relationship where you’re happy enough, but you’re not happy-happy. And what do you do about that? And what do you do when one person’s totally fine with the way things are, and one person’s deeply unsatisfied?” says Harper, who previously starred with Milioti in the 2017 stage production “After the Blast” at Lincoln Center.

“This is our second time playing a couple in marital distress. It’s kind of our thing,” he adds. “She’s such a great performer, and she’s so intensely funny and so intensely talented. And I feel like I get better when I’m working around her and working with her.”

Harper’s been acting in New York for more than a decade — and still calls the city home when he’s not away filming — but it was his 2016 role on NBC comedy “The Good Place” that delivered his breakout moment. He was nominated for two Critics Choice awards and an Emmy for his portrayal of Chidi, an ethics professor in the afterlife. Since those industry accolades, Harper notes that the biggest change in his career has been a change in the casting dynamic; now, potential collaborators often reach out to him about working together.

“It’s nice to have someone be like, I know that you can probably do this, are you interested? And then getting to read it and make the call as opposed to always just hoping that I get invited to play. That’s been the biggest shift,” he says. “I’m getting to try different kinds of characters, and it’s not just Chidi in another show.”

In recent years, he’s starred in several high-profile projects, including A24 horror film “Midsommar,” Barry Jenkins’ “The Underground Railroad” and HBO’s romance anthology series “Love Life.” Most recently, Harper wrapped production on “Landscape With Invisible Hand” directed by Cory Finley, who made the jump from theater to film with “Thoroughbreds” in 2017.

The forthcoming film is a sci-fi comedy that speaks indirectly to the current sociopolitical climate. “It takes place in the near future when an alien race has come to essentially wipe away all of our problems — but it comes at a cost,” says Harper, who met Finley years earlier from the theater community in New York.

“But honestly, I know Cory more from playing basketball with him,” he adds. “There was a game that we had in Brooklyn. It was a bunch of theater kids; my friend called it ‘basketball for poets.’ I’m not particularly good, but it’s a lot of hustle and we work out pretty hard. So that’s how we started to chat and hang out and chill and stuff. He is a really talented writer and he’s got a really interesting ear and a really interesting vision.”

Harper has yet another project on the horizon, which hasn’t been announced yet. Although unable to discuss it in detail, he notes the story is kind of a drama, and a bit of a satire. In other words, he’s keeping things weird.

“I’m down for anything as long as the character’s fun to play,” Harper adds.