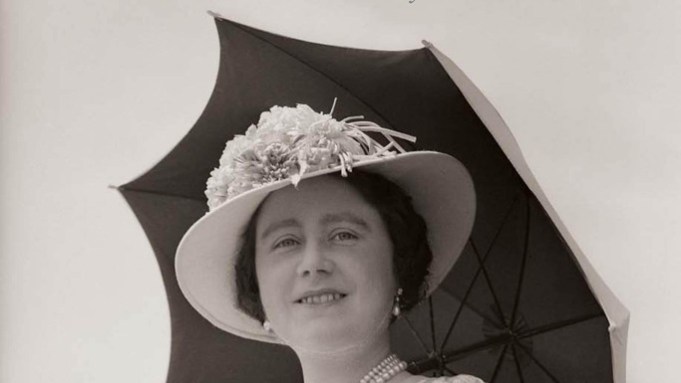 “I think I’m the only writer who’s ever written about both the Queen Mother and al-Qaeda,” says author and broadcaster William Shawcross.

He may be right. Shawcross has written “The Queen Mother: The Official Biography” (2009) and “Justice and the Enemy: Nuremberg, 9/11, and the Trial of Khalid Sheikh Mohammed” (2011). He also wrote the 1995 BBC series “Monarchy” and the 2002 BBC series “Queen and Country.” His latest book, which he edited, is “Counting One’s Blessings: The Selected Letters of Queen Elizabeth the Queen Mother” (Farrar, Straus and Giroux).

The intriguing new book of letters shows the unlikely evolution of the former Elizabeth Bowes-Lyon, a charming, vivacious young woman who was one of the most sought-after debutantes of her day, into a gifted queen who became an enduring symbol of the British monarchy, dying in 2002 at the age of 101. She received, in keeping with the standards of her youth, relatively little formal education, but she evolved into a curious, vital young woman who was an avid reader. She can be seen in the pages of “Counting One’s Blessings” reading “Mein Kampf,” then recommending it to Viscount Halifax — but suggesting that he not read it through, “or you might go mad, and that would be a great pity.” When this odd factoid is mentioned to Shawcross, he’s at pains to point out that, actually, the Queen Mother’s favorite author was P. G. Wodehouse, adding, “He’s a wonderful model for any writer.”

“ ‘Counting One’s Blessings,’ ” he says, “shows her character from childhood to death; she’s somebody for whom the glass is always half-full. Her buoyancy was something that was innate.”

It might seem surprising that Shawcross, 66, became an expert on royalty, since his father, Hartley Shawcross, was a Labour Member of Parliament, and William’s first book, written after he was in Czechoslovakia during the brief flowering of democracy in the Prague Spring of 1968, was about Czech reformer Alexander Dubcek. However, Shawcross senior, who was the lead British prosecutor at the Nuremberg Trials, which tried Nazis for war crimes, also became more conservative as he got older.

One surprising revelation of “Counting One’s Blessings” is how long it took for the young Elizabeth to make up her mind to marry Albert, who was to become King George VI after his brother, Edward VIII, abdicated the throne. “I think she liked Bertie, but the idea of entering the gilded cage of the monarchy” was considerably less appealing, Shawcross observes. After marrying Albert, in fact, the writer notes, she became a kind of ambassador to George V for his own children, who found him a “very stern, unbending father.”

She and her daughter, Queen Elizabeth II, were very close, and, in the later part of her life, they talked every day. The Queen Mother’s relationship with Prince Charles, whom she often said was like his mother as a child, was “a complete love affair.” Prince Charles has taken over a number of his mother’s duties already, and Shawcross expects him to succeed his mother in due course, when he’s in his late 60s or 70s. Not surprisingly, when the Queen Mother learned that Princess Diana had cooperated with Andrew Morton’s book about her, Shawcross says, “She was horrified; she was fond of Diana to begin with.”

It was Queen Elizabeth II who asked Shawcross to write the official biography of her mother; he describes the Queen as “very direct, very straightforward, with a good sense of humor, not pompous and kind.”

However, Shawcross takes the surprising view that Wallis Simpson, whom Edward VIII, later the Duke of Windsor, abdicated to marry, “did Britain a great service.” He says that the duke was “not a good person,” and observes that, after all, one of the first things the pair did after marrying was to visit Adolf Hitler in Germany.

“Churchill was very worried at the beginning; he thought that the Germans would try to kidnap [the duke],” Shawcross says. “So Churchill packed him off to the Bahamas” — out of harm’s way. When he abdicated, Shawcross points out, none of the duke’s servants went with him: “They either didn’t like him or were shocked by what he had done.” But from the beginning, Mrs. Simpson had “cut him off from his family.”

The fact that Bertie — memorialized by Colin Firth in the film “The King’s Speech” — had to become king “unbelievably upset Elizabeth,” but “she was his rock; she was crucial to him doing that.” The Queen and the Duke of Edinburgh also have had a strong marriage, Shawcross says. “She had no eyes for anyone else,” he says of the British sovereign, who married when she was 21. The duke has proved to be “a marvellous husband,” and “the warmth and spark between them became very clear in the Jubilee.”

Elizabeth II and the Queen Mother shared a passion for country life, and in particular, for horses and dogs. “Perhaps that’s because animals don’t know you’re a queen,” Shawcross says.

He calls constitutional monarchy a “romantic institution,” and he has something unexpected to say about the original Prince Albert, for whom the Queen Mother’s husband was named. “One of Albert’s strictures to [his wife Queen] Victoria was that she had to keep out of politics,” he says, and he considers the prince consort, in that sense, to be the father of the notion of constitutional monarchy. Shawcross says of Queen Elizabeth II that “prime ministers come, and prime ministers go; David Cameron and Tony Blair were not born when she came to the throne.” Each succeeding prime minister, he points out, has enjoyed the benefits of her long perspective. She can say, for instance, as he explains, “ ‘I remember Winston had a similar idea back in 1953, and it didn’t work very well then.’ ”