"This is going to be my Facebook profile photo," cried 22-year-old Blair Verhoef as she snapped a shot of Donatella Versace posing in Barneys New York's... 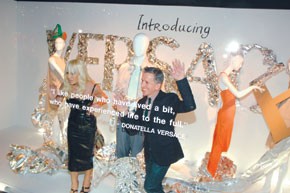 “This is going to be my Facebook profile photo,” cried 22-year-old Blair Verhoef as she snapped a shot of Donatella Versace posing in Barneys New York’s Madison Avenue windows Tuesday night to launch her men’s wear collection. Verhoef’s 27 pals, all fashion students visiting from Iowa State, formed a crush on Madison and 61st, along with a dozen paparazzi.

“It’s like the day of the bloody locusts out there,” said Simon Doonan, who was also in the window and escorted Versace out to the sidewalk so the photographers could get a picture of her in the flesh. “But she’s a good sport.”

Especially considering her signature sky-high platform stilettos, which Doonan noted you don’t see on many women “who aren’t crawling around on all fours.”

How tall were they exactly? “Why does everyone ask me that,” Versace lamented, once she was settled on the third floor where cocktails were being served. “I am comfortable.” She said she “had never had such a strange experience” as standing in her own window and gave her partner some gentle ribbing. “I think Simon actually wants to be a mannequin.”

A crowd of seemingly unlikely fans of Versace’s va-va-voom style gathered to kiss the (enormous diamond) ring including Patti LaBelle, Busta Rhymes, “Stifler” from “American Pie” (Seann William Scott) and Woody Allen and Soon-Yi Previn. “I wear some of the Versace sweaters,” Allen said. “I can’t speak for anyone else, but I think I look great in them.”