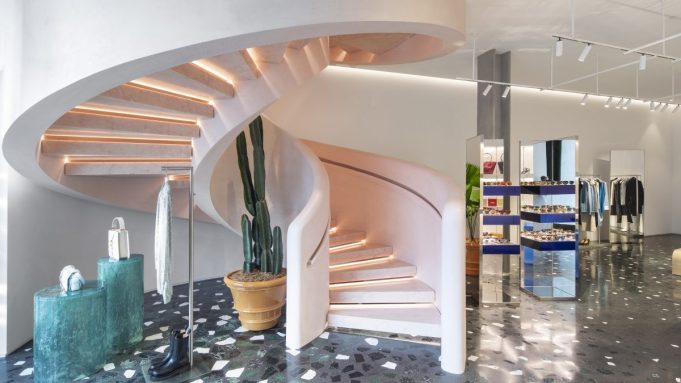 It’s awards season for the best in film, music and theater. So why not include store windows in the fanfare? After all, window shopping is a basic instinct.

Many of the best designed, most beautiful and popular windows were recognized at the annual WindowsWear Awards, held at the Marquee in Manhattan last Tuesday. Twenty winners were announced across a range of categories from the best holiday window and best collaborative window to the best pop-up, best packaging and best interior displays. For the Windowswear web site, a comprehensive visual database of retail and e-commerce, it’s all about recognizing visual display in a variety of formats. Brands, retailers, designers, architects, media and academic institutions use the content which includes best-in-class visual merchandising, retail design, window displays, product packaging and e-commerce.

Bloomingdale’s received the award for best holiday window. “Bloomingdale’s had an out-of-this-world theme, with UFOs and futurist performers in space suits. It was really cool,” said Jon Harari, cofounder of WindowsWear, a web site that archives hundreds of thousands of photos of window displays, store interiors, merchandise presentations and e-commerce from around the world. “The voting for the best holiday windows was very competitive. Bloomingdale’s didn’t necessarily win by a huge margin.”

H&M and Giambattista Valli received an award for pulling off the best collaboration. “H&M has been strong for years when it comes to collaborations. People just love them,” Harara said. “I went to the event at their Fifth Avenue store when they announced this collaboration and it was just mayhem. A lot of the products sold out before it even officially opened up to the public the next day. Even though H&M is a mass brand with low-priced products, they invest the time and resources on great presentations.”

Among the other awards, Macy’s was honored for “the best mannequins,” which were outfitted in Columbia-brand ski outfits as they rode up a ski lift with a surreal urban backdrop.

To determine the award winners, the creative team of WindowsWear — Raul Tovar, Nicole Cimei and Joline Mujica — review about 15,000 photos, roughly a yearlong process to come up with several nominees in each category. “Every month they make notes about who they would want to nominate,” explained Harari. The next step in the judging process is to post the nominees on the WindowsWear web site for the public to vote on the candidates. “People from around the world click on the web site and vote for their favorites, within each category. We tally up all the results from six weeks of voting and then we announce the winners at the Marquee. Anyone from around the world can vote. You don’t have to be a member of WindowsWear. We only require that you provide your e-mail address.”

Eighteen of the 20 awards involved public voting. One award was for the most liked display on social media, which went to Versace, and Simon Doonan, famous for his irreverent window dressing for many years at Barneys, gave an award for his personal favorite, which was an Alice + Olivia window.

Michael Kors copped two awards for having the best icon window and the best interactive experience.

Louis Vuitton also won two awards for having the best installation and the best use of technology.