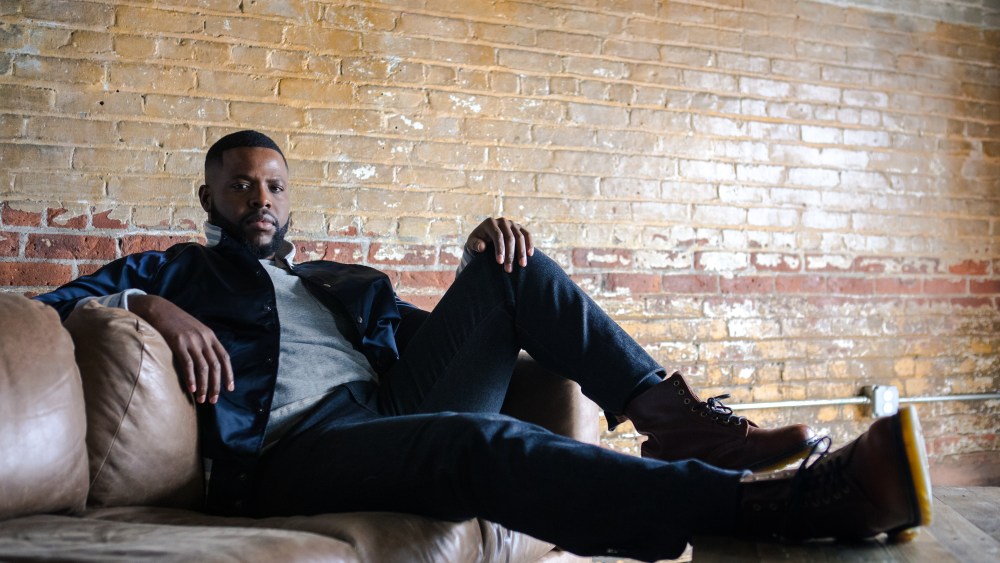 A chef, a lawyer. An astronaut, dentist, doctor. Before he was an actor, Winston Duke wanted to be many different things. Maybe an entrepreneur, or an executive. “I didn’t really know what it meant. I didn’t know that it had to do with business, I just knew it was a big job,” says Duke. “I wanted to be an archaeologist, just a lot of stuff. And then acting allowed me to be everything.”

Capping what has proven to be a breakout year for the 32-year-old actor with a critically lauded turn as M’Baku in “Black Panther” and two installments of the “Avengers” franchise — is a starring role opposite Lupita Nyong’o in Jordan Peele’s highly anticipated horror-thriller “Us,” which opened the SXSW film festival on Friday. Despite all the hype around the project, his nerves were firmly in check a few days before the premiere.

Duke’s latest identity-foray allowed him to slip into the job of a relatable, aw-shucks dad, tapping into a trope mined by Nineties sitcoms.

“But they weren’t super people,” he adds. “I feel like all these things are what programmed men into what they think they should be.”

Duke actually gets to play two characters in the film, both different sides of the same coin. Similar in tone to “Get Out,” Peele’s sophomore film continues the conversation around race and privilege. “Gabe Wilson is the all-American dad, he is the working-for-the-weekend everyman, and his greatest issues and problems are something revolving around the attaining of the American dream. I need a bigger house, I need a bigger car, I need a bigger boat. I need a boat. It’s what are my dreams for my kids? And they live within the normal, ‘ I want you to be a doctor, lawyer, athlete’ kind of thing. And those are his biggest concerns.”

But given that this is a psychologically driven horror movie steeped in social commentary, his concerns for himself and his family change quite a bit during the course of the film.

“I think that’s where this movie lives: It’s warping the mundane and warping normality, and that’s what I felt when I was watching the movie. I walked outside and colors felt different; I looked up and the sky felt a little green,” says Duke, describing his reaction to his recent first screening of the completed movie. “This film really does a great job of interrogating our culture and interrogating the mundane. Flipping it. So your reflection, your look-alike, what would that be for you? How do you warp that, how do you turn that into something disturbing and in many ways grotesque. And once you hold those two images beside each other, you have to choose which is the grotesque image and which feels right. I think it puts the audience in a place of making really deep decisions.”

Although he’s spent a lot of time thinking about the film’s concepts in the abstract, he has a harder time describing the shape a Winston Duke alter self might take.

“I think I would be really afraid to imagine that,” he says. “These doppelgängers [in the film] aren’t shadow selves, they’re not the darkness that you hide within yourselves; they’re almost byproducts of your decisions. These doppelgängers are directly related to your own decisions, they’re almost demons of your own making. And it’s really interesting thinking about that, and thinking about how all the privileges that you have that you don’t see as privileges are complete privileges to them.”

Duke glances at the iPhone face-up on a nearby wooden table, recording the conversation.

“Just your cell phone, for instance. It’s more of a curse for some people who are enslaved to mine those minerals to make those chips. And lose arms and body parts and are caught up in civil wars and things like that, just so you can have your phone — because those are expensive commodities. But you don’t think, ‘Oh yeah, it’s so cool, my phone.’ You don’t think about how many things are globally connected and that you are passively deeply a part of a blood industry. It’s your phone, it’s your clothing, it’s your food, it’s your geopolitics, it’s so much. But we don’t really think about how we participate.”

More simply put, “I think [the film] is commenting on a lot of cultures of power. Which cultures and power are you part of, participate in, and help to uphold. And the critique is multifaceted, it doesn’t excuse anyone, it doesn’t excuse its primary audience,” says Duke. “If your chickens came home to roost, what would they look like? Would you be comfortable with the image that they showed up as? If all your sins came back to be repaid all at once, are you prepared for them to look like this, the spitting image of you?”

Duke, who towers above most in any room at 6 foot 5 inches, has a presence that leaves one guessing. He vacillates between warm familiarity — doling out high fives — to introspection, choosing words with intention, delivered with sharp enunciation equally fitting for an onstage performance. Born in Tobago, he spent his teenage years in upstate New York, acting for the first time in high school before becoming serious about pursuing the craft professionally while he was a sophomore at the University at Buffalo. He later refined his technique in Yale’s MFA acting program; it’s there that he first met eventual costar Nyong’o, who was also in the program’s graduating class of 2012.

Nyong’o was already signed on for the lead — her first in a feature film — of “Us” when Peele approached Duke about the costarring role, almost exactly a year ago. Two weeks after meeting Duke at the 2018 Oscars — where Peele walked away with a best original screenplay win for “Get Out”; the film also earned best picture and best director nominations — Peele called Duke and asked him to read the script for his next movie and let him know if he was interested.

“I read the project and the rest is history,” says Duke, who attended this year’s Oscars, wearing custom Thom Browne, in support of “Black Panther.”

The project represents a sort of “aha” moment of sorts for Duke and Nyong’o, who also costarred in “Black Panther.”

“I think it was 2016, we were having dinner and I was just like, ‘I can’t wait to see you lead films.’ And for this to be her first lead, she’s carrying the movie, and then I’m a part of it in service and support to her — it means everything,” says Duke of his longtime friend. “Coming from the same program and having dreams together and just watching movies together and being like, ‘Oh man, do you think that will happen for us?’ And not knowing, just being completely unaware of what the future held,” he continues to reminisce. “I’ve watched her work through course loads and juggle multiple shows at once, and seeing her just do different things, go from really small black box student productions to main stage to Oscars to us working together…we’ve just seen each other do a lot of work and seen each other through a lot that the public hasn’t ever gotten to see.”

For example, this moment while on set:

“They were carting us around from the set to another set, and we drive by the ‘Jaws’ set and the shark pops out of the water and there’s a flame explosion — and it’s always going, it doesn’t really turn off. We were driving by that and it’s like, Jaws pops up like [what] and I’m looking at this thing and then I pull back and I look at her, and then I pull back again and I’m just looking out, I’m like, ‘Do you realize how crazy this is?’ And she goes ‘What do you mean?’ And I said, ‘Do you realize how crazy this is, that we are on the Universal lot driving by Steven Spielberg’s ‘Jaws’ replica, doing something that could also end up being landmark in American cinematic history? Do you realize that’s happening to and for us right now? Isn’t that amazing?”

Winston seems to take it in for a second, dropping character and eyes widening as he processes the trajectory of his career from the vantage of his younger self, from the POV of an audience.

“And it’s those moments, those aha, wow, look at us moments, that really are arresting,” he says. “You know?”