French President Nicolas Sarkozy is in the market for a makeover. 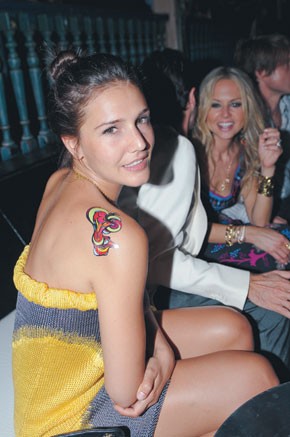 French President Nicolas Sarkozy is in the market for a makeover. Perhaps something à la Richard Gere in “American Gigolo,” he joked to Giorgio Armani, who designed costumes for the film, moments before declaring the Italian designer an officer of the Légion d’Honneur at the Elysée Palace in Paris Thursday (Italian actress Claudia Cardinale was made commander at the same ceremony).

In a speech packed with one-liners that had the crowd roaring with laughter, Sarkozy played up his honorees’ origins. “As you know, I’m rather close to Italians,” he said, alluding to his new wife, Carla Bruni-Sarkozy, who did not attend the event.

This story first appeared in the July 7, 2008 issue of WWD. Subscribe Today.

Carla Fendi, Silvia Venturini Fendi, Nathalie Rykiel, Lady Helen Taylor, Eugenia Silva and Tina Turner were among those who gathered in the sunlit Jardin d’Hiver for the ceremony. Turner accessorized her sparkling green jumpsuit with her own Légion d’Honneur medallion. “I’ve got my little shiny one,” she said with a laugh, patting the prize.

Dame Helen Mirren bowed before Armani as she offered her congratulations. “The first time I had a posh dress, it was Armani,” said the actress, who wore costumes by the designer in the 1990 film “The Comfort of Strangers.”

Meanwhile, the same night, Duran Duran performed with producer Mark Ronson at a party for Smirnoff at La Cigale. “My sister and I have dances to every song, and we’ve been teaching Mum the moves,” said Amber Le Bon, the eldest daughter of Duran Duran’s lead singer, Simon, and his wife, Yasmin. Eva Mendes, Micky Green and Emilie Dequenne grooved to Ronson’s reinterpretations of the band’s 20-year-old classics plus songs from its new album.

Also on Wednesday, Mario Testino opened his exhibition, “Obsessed by You,” at London’s Phillips de Pury auction house. “I bought the black-and-white image of Kate Moss and I’m going to hang it on the wall of my office,” said Topshop honcho Sir Philip Green, referring to an image of the model — and Topshop designer — holding a cigarette.

Apparently it’s also quite important to keep a watchful eye out — the gallery hired Queen Elizabeth II’s dashing dismounted Life Guards, in full regimental regalia of boots and swords, to guard the images.