The dinner's honoree, Ashley Greene and Nicola Maramotti all turned up at the SoHo House in West Hollywood wearing pantsuits. 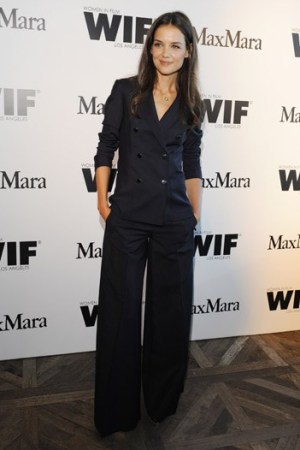 As DJ Alexandra Richards spun tunes during cocktail hour, Holmes stood by in her heels and navy pantsuit.

“It was the most comfortable outfit I could find,” she said.

An almost unrecognizable Greene, sporting a healthy tan, took a cue from Holmes and Max Mara’s Nicola Maramotti by also choosing a pantsuit.

Also mingling in the crowd were Ellen Pompeo, Abigail Spencer, Jennifer Morrison and Jane Fonda, who snuck in after dinner and sat near Greg Kinnear, Judd Apatow and his wife, Leslie Mann. As talk turned to summer vacation plans, Maramotti extended an invitation to the entire room to visit her family’s compound in Reggio Emilia, Italy.

Holmes was the first to pipe in, “When can I come?”