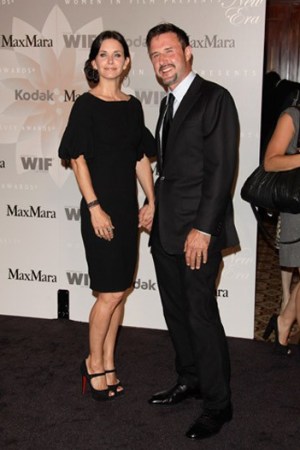 The Hollywood ladies honored at the annual Women in Film Crystal + Lucy Awards Tuesday night were in a reflective mood, recalling the days when their names weren’t in lights on the marquee. “I’m just a girl from Queens,” said Zoe Saldana, who accepted the MaxMara Face of the Future award alongside fellow honorees Courteney Cox, Eva Marie Saint, director Lisa Cholodenko, cinematographer Cynthia Pusheck and Universal Studios chief Donna Langley. “Everyone here seemed like royalty when I was growing up.”

“I’m also from Queens,” said Saint to the crowd gathered at the Hyatt Regency Century Plaza. “But back when I took the subway to Manhattan, it only cost a nickel.”

Emily Blunt, who introduced fellow Brit Langley, did her best to come up with a similarly humble story.”We’re actually not from England. We just thought the accent would get us far. I’m really from Michigan,” she said to much laughter.