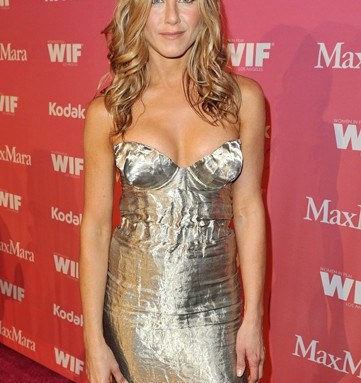 Hollywood stars gathered for a celebratory group hug at the Women in Film’s annual Crystal + Lucy Awards, held Friday night at the Hyatt Regency Hotel in Century City. Some among the crowd — which included honorees director Catherine Hardwicke and cinematographer Petra Korner, and guests like Blythe Danner, Sarah Chalke, Christina Hendricks, Heather Locklear and Selena Gomez — wondered just how many statuettes an actress needs. “She’s already got so much bling — an Oscar, an Emmy, a Globe — why the hell does she need another award?” joked Jodie Foster of her friend Holly Hunter, who took home the Lucy Award.

But Jennifer Aniston, recipient of the Crystal Award, wasn’t about to look a gift horse in the mouth.

“I’m thankful to everyone in this room who’s ever hired me,” she said, poking fun at the uncanny correlation between her movie titles, “Rumor Has It,” “The Break Up,” “Derailed,” and “He’s Just Not That Into You,” and her personal life. “If anyone has a project titled ‘Everlasting Love With An Adult Stable Male’ I’ll take it,” she said.

She wasn’t the only one taking jabs at her dating history.

“People often say that Elizabeth Banks and I look alike, which I think is really flattering until they ask me if I am Elizabeth’s mother,” deadpanned Chandler.

Banks herself was just grateful for the acknowledgement.

“I assume this award means someone out there thinks I’ll keep working,” she said.