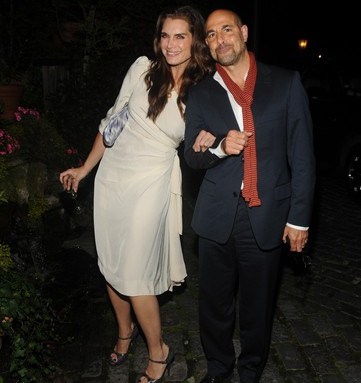 Party goers were in a New York state of mind on Wednesday at a screening of Woody Allen’s latest flick, “Whatever Works,” the filmmaker’s first project set in New York City after a string of abroad features.

Stars Larry David, Evan Rachel Wood and Patricia Clarkson were on hand for the screening and after party, which was hosted by the Cinema Society and The New Yorker and held, fittingly, at Brooklyn’s River Café overlooking the Manhattan skyline.

But the picturesque setting wasn’t the only topic of conversation for a motley crew of revelers that included Amy Ryan, Seth Meyers, Agyness Deyn, Dick Cavett, Swoozie Kurtz, Patrick Wilson and Barbara Walters. Many also discussed the onscreen May-December romance between David and Wood.

Allen didn’t see what the fuss was about. “That’s just an older guy and a younger girl,” said the filmmaker, who arrived with wife Soon-Yi Previn. “There are all kinds of strange pairings that go way beyond that.”

Wood, who has also dated outside her age range off screen, felt the same way. “It’s like, whatever works, man, thumbs up,” said the starlet.

And for David, an age difference would be the least of his concerns. “I think its incredible that anyone would ever want to spend more than three hours with me and not want to leave,” said the comedian.