After a long day of the biz, the actor reads minds, pops vertebrae and waxes philosophical about wherever his wild mind takes him. 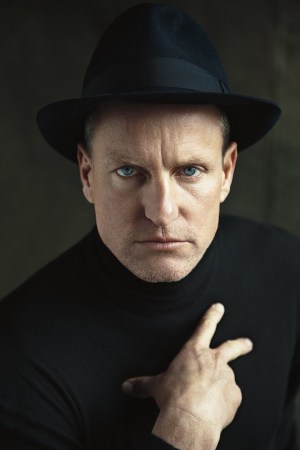 “Look at the first word at the top of the page. You see it? Got it?”

Woody Harrelson is in his penthouse suite at the Soho Grand. He’s got a yellowing dime-store paperback in my face. He’s asked me to pick the first word on the page and is trying to conjure up a little magic.

“Now, what I want you to do is focus on that word and project it on a giant white screen, almost as if you’re painting it.”

The natural light is fading as the midwinter Manhattan evening turns to night, but Harrelson hasn’t seen fit to turn the incandescents on just yet. In the almost-dark, standing before me in a hooded sweatshirt and turtleneck, arm outstretched, there’s something almost mystical about him. A mad monk in a Louis Vuitton night-watchman’s knit.

“OK, now, I get a sense already it’s not a short word…probably anywhere from five to eight letters, I would say. I would say it’s closer to eight than it is to five. Between seven and eight letters….OK, now just try not to show any reaction. I’m just going to go through the vowels. A. E. I.…”

He goes on like this, scanning my face for clues as he tries to divine my word one letter at a time.

He gives a down-home chuckle as he registers his mistake.

“I can’t read it all necessarily.”

Woodrow Tracy Harrelson is 50 years old and yoga fit, still balding handsomely and still in possession of the rogue’s gallery of teeth that constitute his smile, which he can’t suppress when his Jedi mind trick fails. He’s in New York on break from filming a bank-heist flick in New Orleans in which he plays a mentalist (thus the magic), and he’s just wrapped a long day of promotional rounds for Rampart, a dirty-cop drama that, had it been timed a little better, might have earned him his third Academy Award nomination.

Harrelson is nearly three decades removed from stumbling into millions of American living rooms as Woody Boyd on Cheers. And though he’s aged out of his leading-man prime of White Men Can’t Jump and Indecent Proposal, he’s as in demand as ever, typically in two types of roles. First there is the cog in the system that winds up asking some pretty serious questions, explicitly or otherwise, about the tattered state of the American moral fabric. See his 2009 performance as an Army casualty notification officer in 2009’s The Messenger; a tortured, crooked cop in Rampart (both films directed by talented upstart Oren Moverman), and, earlier this month, as Steve Schmidt in HBO’s Game Change, the oft-aghast Republican operative at the center of the 2008 McCain-Palin ticket. Second, there is Harrelson’s work in the mentor-figure, comic-relief, post-apocalyptic visionary category. See Zombieland and, later this month, his go as Haymitch, the boozy, beloved trainer to the teenage gladiators of The Hunger Games.

The two Woodys seen on-screen of late are a sort of strange amalgam of the real thing: An amateur American philosopher who also happens to have a world-class sense of humor that continues to function when the going gets really bad.

Over a couple of hours on a New York Friday night, Harrelson has it all on display. He’s been cooped up all day and is just now shaking it off. The remains of a raw-food feast are scattered on a dark wood table in the suite’s dining area: leafy greens and an orange-ish dressing, two large glass—and they’ve got to be glass—bottles of still water, a plate of honey crackers that taste shockingly great for having not been cooked, a half-finished glass of white wine. A heavy-looking coffee table is tipped on its side and shoved against a wall. Woody takes questions as he paces the living room, tries to flip a baseball cap onto his head using his foot and attempts, knees-to-chest, to crack his back on the ottoman.

His mind’s all over the place. One minute he’s talking Henry Miller and Vladimir Nabokov, the next he’s spinning a yarn about the fight he got into on his last day of work as a short-order cook, before his acting career took off. It’s a long story that includes the following gem: “And so knowing that I’m gonna die, I figure: Oh well, let’s take an eye on the way out. So I reach back and I shove my finger in his eye socket….”

Harrelson would be almost avuncular if his own pale blue eyes, the dangerous-looking type, didn’t lase into you every few minutes. Without those eyes it would be easy to dismiss him as something of an eccentric uncle, the kind of guy who is quick with a card trick and might have bought his nephew a beer before he hit 21. But even a brief encounter with Harrelson reveals him to be a kind of searcher, the type of idiosyncratic soul that tends to serve as the protagonist in better Westerns or kung-fu flicks.

“Woody is a wise man,” says Jay Roach, who directed him in Game Change. “It’s a word that’s so obvious and a very general thing to say about someone, but he’s been through a lot. He cares deeply about people, and he’s always looking for meaning and is, I think, a deeply philosophical person. I seriously doubt he would describe himself that way…he, on the outside, doesn’t strike you as that thoughtful, because he is so laid-back. But two or three minutes into a conversation [with him], you’re in some deep territory.”

Harrelson is indeed prone to wax, at length, on any number of pet topics: his rigorous (but not militant) raw-food diet, his eco-activism and, of course, his unabashed stoner tendencies. But he also lacks much self-possession, a rare trick in an aging bohemian, and a quality that keeps any preachy tendencies in delightful check.

“Being in New York can certainly incline you a little bit more toward having a drink,” Harrelson says with an aw-shucks grin as he compares his current digs to the home he keeps in Hawaii, the one that’s around the corner from his buddies, and fellow travelers, Willie Nelson and Owen Wilson. “I’m really doing more wholesome activities. I set them up so I’m not just left to my own devices, which might just be going out on the prowl in the Village, just looking for places to drink myself stupid—depending on what buddies I’m with.”

He explains that he has plans to venture to Williamsburg the following night but is a bit confused about the neighborhood demographic.

“Hipsters! That’s what they said! They didn’t say hippies! Well, as long as they like jazz. I’m not quite a hippie, either. I’m more of a, you know, what do you call it? A style of poetry? Beat….”

Like all great searchers, Harrelson has an origin story. He was born in Midland, Tex., and raised in the Midwest—Lebanon, Ohio, if you want to stick a pin in it—after his parents divorced. A self-described Presbyterian mama’s boy, he flirted with becoming a preacher in college before scrapping organized religion entirely. When he was 18, his father was arrested for the contract killing of a federal judge in San Antonio. He later died in prison. Harrelson acknowledges that his father’s fate might have had something to do with his own innate sense of social justice.

“I definitely see how he got wronged by the government,” Harrelson says of his father as he takes a deep drag on a pre-rolled joint. “I have no way of knowing what he did. I don’t have any way of knowing. But I just see the way the whole trial was conducted. He got railroaded.”

He offers up the joint but is turned down with a mumbled apology, something about reporting and needing one’s wits.

“I’ve decided to forgo my wits altogether,” he says after a pause.

The day’s press commitments were apparently more than a little trying, and he needs to unwind. “Verbal paparazzi,” he says, settling on a way to describe junket duty. Though that last guy wasn’t so bad, he decides, the one who was asking him about religion and his mother.

“In the real world, I’d be asking him the same questions and probing about his philosophical bits,” Harrelson says, then mentally wills himself out of his muck.

“I don’t like to hear myself play ‘Movie Star Blues in A Minor,’ ” he laughs. “It’s the greatest life….Some people believe when you’re hovering between lives, you’re kind of in that ethereal state where you’re just an astral body up in the other world, and you’re looking down, making decisions about your life. Whoever that guy was in that other world—which I guess is the essence of me—looking down, just came up with a great plan….It’s only because I’m so f—ing spoiled that I can bitch about not wanting to do interviews.”

When he’s not filming or promoting, Harrelson is in Maui with his wife, Laura Louie, and three daughters. Makani, the youngest, is 5, and Deni, the eldest, is old enough now to attend college on the mainland. He is the lone male in a house of four women.

“Well, five really, ’cause you gotta include my dog, Snowy, one of the finest bitches in this whole wide world,” he says. “It’s great when you can use that word in absolute freedom and assurance.”

Harrelson relishes family life. The night before, he’d been on the Late Show With David Letterman and is honestly distraught when he realizes he failed to mention his middle daughter, Zoe, in the interview. He beams when he talks about his kids, and looks downright forlorn when he calculates that he was away from home for seven—no, make that eight—months last year.

“You know, he’s a wonderful father,” says Gary Ross, who directed Harrelson’s turn as a father figure, if a drunken and untamed one, in The Hunger Games. “There is a caretaking kind of quality to him. He’s a very compassionate person.… At the same time, he was able to create this wild, kind of dissolute character, which was written in the book. There’s a wide range to him as a human being.”

It’s getting later and Harrelson now has just 15 minutes to make it to the Upper East Side to meet a buddy’s ex and their kid at vegan mecca Candle 79: “The best vegan food tastewise and texture and all that. But I’m a raw foodist at heart, so I can’t go too strong on this.”

He throws on a jacket, hits the head (talking the whole time) and, after a brief hunt, locates and slips on the Air Jordans he recently got in a trade with a New Orleans high schooler after a pickup game.

Before taking the elevator to the lobby, there is just one last item of unfinished business—the word he couldn’t guess in his earlier failed bit of mentalism.