Boys’ Night Out With Justin Bartha

WWD met the actor at a bar in Manhattan's theater district to talk about his roles, dating, fashion and Words With Friends. 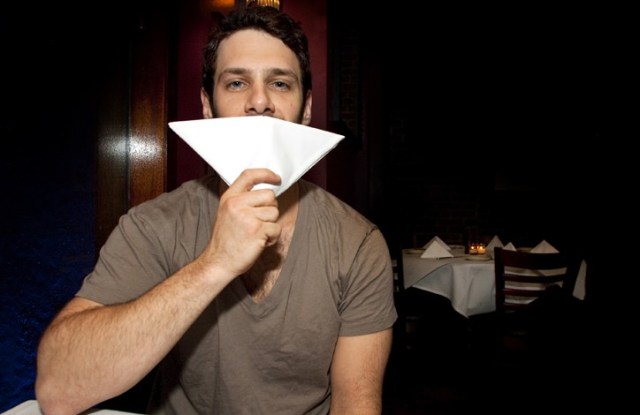 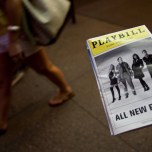 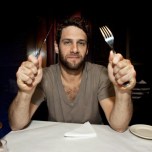 Justin Bartha is about to turn 33. He is cute, like a younger Paul Rudd with better hair and bluer eyes. If you recognize him, it’s from his smallish parts in two big movies, “The Hangover” and “The Hangover Part II.” He also dated Ashley Olsen. Right now, Bartha is starring as a suicidal loner in “All New People,” an off-Broadway comedy written by “Scrubs” actor Zach Braff, which is in previews and opens July 25 at Second Stages in New York City.

We met at a bar in the theater district after a performance the other night. Bartha was in a good mood, a mood for a drink — Dewar’s on the rocks. “After that audience?” he said. “Yeah.” The show had a lot of cocaine and sex jokes that didn’t land with the inordinate amount of seniors in the crowd, but everyone else seemed to like it.

That’s how our conversation began, talking about the play, and Bartha’s next one, which is written by his friend, the actor Jesse Eisenberg, and will go on at the Cherry Lane Theatre in the fall. By the 17-minute mark on my recorder, we had already covered his first professional acting role as a leper/Jesus-whipper in a local production of “Jesus Christ Superstar,” July Fourth fireworks, and Bartha’s bulldog, Larry. “Jesus Christ, I’m sorry,” he said. “I’m so boring. You’re like, ‘What do you do?’” There was an awkward lull.

“What else do you want to talk about?” he asked.

How about his cast? Does he like them? Yes. Are any of them dating each other? “No, they’re all either married or have serious boyfriends. Except me. I’m the only single one.”

There is no reason that he shouldn’t be out painting the town, yet he told me there are no plans for what I proposed as a Summer of Justin. “As in, like, going out and making love to all sorts of ladies?” he asked. The man is a world-class deflector who turned just about every question back on me — what I’m doing for my summer of love, if I’m a partier, but in a playful, teasing way so that I didn’t even realize how guarded he was until I transcribed the interview. Smooth.

In retrospect, it was kind of a rambling series of digressions on the state of the celebrity interview, which devolved into gentle bickering over whose industry is crazier, like two kids defending their dysfunctional families against attacks from another tribe. We don’t understand each other’s worlds, but it beat talking about the “magic moments” of acting. I liked it.

He brought up fashion, specifically who my favorite designers are, which was a perfect setup to the looming question of Olsen, whom Bartha dated for more than two years until breaking up in March, and has only nice things to say about. Me too. I’m a big fan of The Row. That’s presumably where he got his impression of the fashion world as a less-than-sane place, which was his counterargument to my inability to relate to the idea of becoming an actor — the failure to success rate is beyond my comprehension.

“But that’s why so many actors go crazy,” said Bartha, who grew up in Michigan and moved to New York in 1996 to study drama at NYU.

Right. So, are people in Hollywood crazy?

“Are people in Hollywood crazy? Really?” he said. “Are you going to ask me that?”

But how do you relate?

The mature thing for me to do was antagonize: But you dated an Olsen. They’ve, like, been born and bred on weirdness.

“When you say a sentence like that, is there anything in your head…,” he started to say, but I cut him off.

But you’re a normal guy coming from a normal background and you suddenly think, Ashley Olsen is a cute girl. I’m going to go out with her?

“What if she’s actually a normal girl and it’s just a media perception of her?” he said.

I’m sure she is, but it’s still you coming from the outside world. You have to think: “Full House,” Dualstar, billions — weird life.

“Wait, full house? Oh, ‘Full House,’” he said. “I thought you were going to make a poker reference.”

By that time, he had ordered me another drink.

“Thin” was the best I could come up with for my first move. When I got home Bartha had returned with “towy” and a message: “Thin? A little on the nose for the fashion world.”