A star-studded crowd gathered in the Hollywood Roosevelt Hotel's Gable & Lombard penthouse to honor Salma Hayek for her humanitarian work. 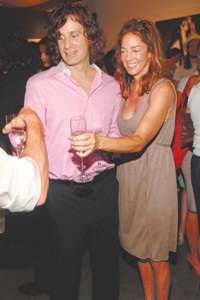 “Men are definitely my weakness, but women are God’s masterpiece,” declared Salma Hayek Thursday night in the Gable & Lombard penthouse of the Hollywood Roosevelt Hotel. A crowd that included Jane Fonda, Mia Maestro, Christina Ricci, Mischa Barton, Ginnifer Goodwin, Maria Bello, Eva Longoria and Amy Smart gathered as Dolce & Gabbana honored Hayek for her humanitarian work. “I realize I’ve lured you all here with free drinks,” the guest of honor joked. The view from the three-story penthouse, newly refurbished by Dodd Mitchell and tucked right behind the hotel’s red neon sign, wasn’t too shabby, either.

But Fonda, for one, was staying on message. “It’s one of the advantages of celebrity, to be able to draw attention to causes like women’s rights,” said the actress, who later admitted she’s only a fashion lightweight. “I don’t really know one designer from another, I just know I like Dolce handbags.”

Other Dolce-clad guests were more forthcoming about their style. “I like that it’s both strong and sexy, and so I’m naturally drawn to it,” said Alicia Keys of the Italian label. “It empowers women, too.”

In New York the same night, fashion photographer Greg Kadel opened his public exhibition at Milk Studios, where a party was held to celebrate his work and his collaboration with avant-garde magazine Between Us. Rosario Dawson, Kelly Klein and Julia Restoin-Roitfeld all made appearances, as did virtually every model and modeling agent currently working in Manhattan. The walls were covered by shots of nearly naked young women, and, as a sign of just how blasé people are about nudity these days, some of the women in the crowd couldn’t recall whether they had taken their clothes off for Kadel. “I did a video for him,” said Anouck Lepère. “I don’t think I was completely naked, but it’s so hot today I can’t even remember.”

On Wednesday, a mix of opera lovers, drag queens and “Sex and the City” fans, including Simon Doonan, Claire Bernard, Amanda Lepore and Robert Verdi, hunted for bargains at Divas Shop for Opera at Studio 10. Patricia Field, the evening’s co-chair, has had plenty of experience with divas, though she claims not to be one herself. “I’m only a diva when it comes to the truth. If you’re going to sit there bulls—ting to my face, then I’m gonna be a diva,” she quipped.

Downtown at Cipriani Wall Street, young social up-and-comers flocked to the sixth annual Friends of the Highline benefit, honoring Kevin Bacon, Diane von Furstenberg and city councilwoman Christine Quinn. Bacon’s presence at the party, sponsored by The Caledonia and Chelsea Market, was evidence that mass mailings work. “I got a brochure in the mail in 2000,” said the actor, who lives on the Upper West Side, far from the planned park’s Chelsea location, and is now a champion of the project. Von Furstenberg, meanwhile, had just jetted back from vacation in Majorca, where she spent too much time convening with nature. “I got too tan,” she said, “I look like an old turtle.”