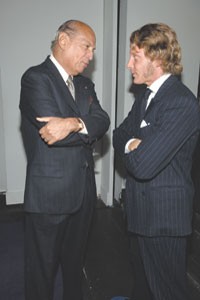 NEW YORK — In the new book “American Vertigo,” Bernard-Henri Levy describes touring across America, visiting prisons and megachurches and interviewing everyone from Sharon Stone to Richard Holbrooke. By contrast, the guests at his book party at Diane von Furstenberg‘s studio Jan. 23 were slightly less eclectic, but not much. There were fashion people (Oscar and Annette de la Renta) and media elite (Graydon Carter and Charlie Rose), socialites (Amanda Brooks and Anh Duong) and artists (Francesco Clemente). A few of the guests even seemed to be ripped straight from the headlines. Lapo Elkann, the Fiat heir, made his first public appearance since his overdose earlier this year and wound up eating dinner just a few seats down from Carter, whose magazine, Vanity Fair, recently did a big exposé on him. And former New York Times executive editor Joe Lelyveld had a warm exchange with Judith Miller, who was eager to tell him about the “eight thousand things” she’s been able to do since leaving the Times, including a recent trip to Antarctica.

Stephen Sondheim was also in the house, and was eager to say hello to Lauren Bacall. “Here comes one of my father’s models,” he said. Turns out, Bacall had been a fashion model for Sondheim’s father, Herbert, who had a long career on Seventh Avenue as a dress designer. “I was a terrible model,” protested Bacall. “I was terrified and bony.”

Three nights later, the crowd at the Winter Antiques show’s Young Collectors Night at the Seventh Regiment Armory was more about the ladies — Jennifer Creel, Coco Kopelman, Emilia Fanjul, Susan Fales-Hill, Samantha Gregory (who just returned from a yoga trip to Mexico) and honorary co-chairman Delphine Krakoff, who came with her husband, Reed.

But, while some perused the antiques regaling what was past, others were already lamenting the fashion week frenzy to come. Jane Lauder will accompany Serena Williams, a guest designer for Estée Lauder’s Flirt cosmetics line, to a handful of runway shows. “It’s work,” she said with a smile.

The same night and an ocean away, fashion’s finest trekked out to remote Bois de Bologne in Paris for the annual Sidaction AIDS benefit gala — and a hot affair it was, literally. “Is it only me, or is it boiling in here?” asked L’Wren Scott, who, under the tablecloth, had hiked the pooling Edwardian lengths of her Rochas gown into a miniskirt. “Someone should toss a plate through one of those windows.”

The socializing went on despite the sauna-like conditions. One of the rare times tout Paris mingles — bad blood and otherwise — it was a chance to see Donatella Versace interact with Olivier Theyskens, Lars Nilsson chatting up Loulou de la Falaise, Carine Roitfeld wearing Givenchy couture from Riccardo Tisci‘s show the night before and normally blasé fashion people get starstruck by the sight of Catherine Deneuve or Marisa Berenson. “I’m in Dior couture, of course,” offered Berenson, who sat next to Sidney Toledano, Dior’s president. Meanwhile, Pierre Bergé, the evening’s traditional ringleader, proclaimed it the best yet for the fund-raising effort. “We need to build even more momentum in this important fight,” he said.