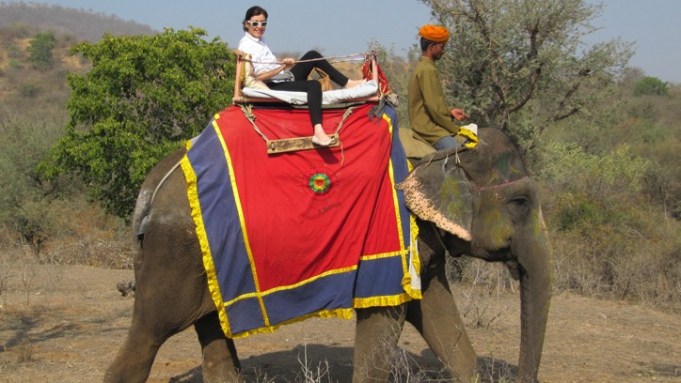 My husband, Evan, and I landed in Mumbai late in the evening and headed straight to our hotel, the Taj Mahal Palace & Tower hotel, one of Mumbai’s heritage landmarks, which is quite beautiful although still under renovation after last year’s terrorist attack.

The next morning, we visited the embroidery studios. I was surprised to find that this intricately delicate handwork is almost all done by men who spend all day working diligently over low-framed tables. We took a break in the afternoon for a late lunch on top of the Intercontinental Hotel to have our first taste of some local food.

In the evening we went to a traditional Indian wedding, which was held at one of Mumbai’s largest equestrian grounds. The event was on a very grand scale with a sea of Indian women dressed in opulently embroidered saris. I wore a white lace dress with yellow ribbons from my spring collection. Certainly India is a place where wearing color is the normal way of fitting in with the crowd. In fact, just when you think you may have on too much color or too much jewelry, you can put on one more piece.

The next day, I discovered a boutique called Bombay Electric. It was just a short walk from our hotel and had a fantastically well-edited selection of Indian-made ready-to-wear and accessories for men and women. They also offer made-to-measure pieces, which was a great treat. We ordered our very own custom shirts to be ready the following day.

Our day ended with a visit to the old “thieves market,” where most antique furniture stores are now located.

Early the following morning, we left for the city of Udaipur in Rajasthan where we spent four days at the beautiful Lake Palace, which was originally built by the Maharana of Udaipur as a summer residence. For me, it was especially fun to stay at the Lake Palace, as it was one of the main locations used to film “Octopussy,” one of my all-time favorite James Bond films.

From there we moved on to Jaipur, capital of Rajasthan and also the jewelry center of India. We visited Gem Palace, an old family-run jeweler, which is more like a candy store than a jewelry store, and a sari shop, where I was fitted for my own sari. After deliberating over fabrics for three hours, I decided on an embroidered white sari and a blue one with elaborate silver embroidery.

Our trip would not be complete without an elephant ride, which we did on the last day in Jaipur, followed by a lovely lunch of very spicy Indian food and a game of elephant polo!

My family and I had been planning a trip to Maui for years. My younger and only brother, John, has lived on the island since 2006. His phone never works because he drops it in the ocean all the time, so I was really looking forward to catching up with him.

We arrived at his house on Christmas Day. It’s all concrete and glass, opens up at every angle like a magic box, and has an unbeatable outdoor shower-garden. It’s right on the beach off of Front Street, the main strip in the Lahaina area.

After we settled, we drove to Haleakala, a volcano in east Maui. The clouds were too low for good visibility from the top, so we went to the Twin Falls instead. There, we drank from coconuts and hiked through the forest to get to the falls. They were beautiful — we swung on a rope swing through the water and dropped into a natural pool below.

Another day, our friend Loree Rodkin invited [my boyfriend] Keegan and I out on a sailboat that she had chartered to go whale watching with Alice Cooper’s wife and children. We had lunch on the way out and started to spot the whales right away. The captain was originally from New York and did not seem to miss the city at all.

My brother also took me to a swimming spot between Honokohau and Honolua Bay. I can’t say too much because it is a favorite local spot, and I am sworn to secrecy. But we had to scale a 300-foot cliff to get there, hanging from a rope and descending ladders. Scary, but so worth it.

We also went zip lining over the valleys of Mount Kahalawai, above streams and waterfalls; attended a traditional luau; ate incredible seafood at Mama’s Fish House, and met the coolest people here. I will definitely be coming back soon.

I’ve been visiting Playa Negra in Guanacaste, Costa Rica, every winter for six years. At this point, it’s pretty much a second home.

I wake up around 6 and drive the quad (my only source of transportation while I’m here) to the beach. Every morning, I go to either Playa Negra or Playa Callejones to catch waves for a few hours; it all depends where the best break is. Nono, my dog, usually follows along.

I’ve been staying with my good friend, [photographer] Erez Sabag, all these years, but I’m in the process of building my own house. It’s taking a lot longer than expected.

On my way back from the beach, I pop by the new house, visit the fisherman to see what he’s caught for our dinner, then pick up some groceries. The grocery shop is basically a tiny bodega set up in front of a home. I usually pick up some plantains to make patacones, a typical Costa Rican side dish. Cooking is a big part of the trip and at least one meal a day is home cooked. (We even pack the spices and ingredients that we want to have on hand since we make so many meals at home.)

Later, after a little siesta, we’re off to visit our Belgian neighbor and borrow some horses for an afternoon ride.