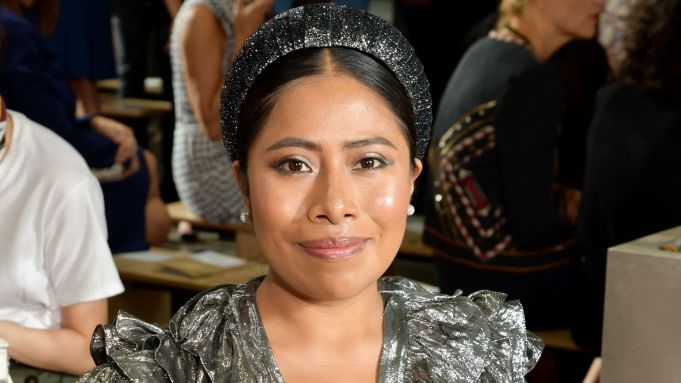 While Kidman and Hudson are seasoned Michael Kors guests, it was the first fashion show for Aparicio, who became quite the red-carpet star this past awards season while on the trail for “Roma.”

“I will see how it actually is because all I know is what you see online,” she said before the show, seated with her stylist Sophie Lopez.

Aparicio said she is in the process of speaking to a couple of directors about future projects, and is also focused on humanitarian work at the moment. In the months after the Oscars, which turned her into a megastar in her native Mexico, she’s still adjusting to how “Roma” changed her life.

“I was trying to assimilate all that had happened,” she said. “[People] wanted to meet me and ask questions about the film and how it had been filmed all over the world; it was all sort of a big dream,” she said.

“This is my fourth and final — we’re ending it on a high note,” said Hale, as she was making her way back to her seat after getting an introduction to Kidman. “He’s [Kors] so iconic and classic and is always dressing for very strong powerful women. And I hear he’s just a lovely human being. So I’m happy to be included in all of it today.”

After the show she was planning to order room service and nap; on Monday, she begins filming for her upcoming CW series “Katy Keene,” a spin-off of “Riverdale.”

“We get to actually film in New York, which in these days is unheard of,” she said.