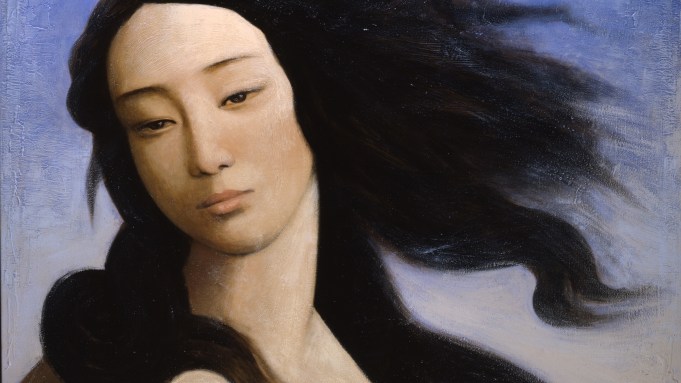 Many years ago, he found himself at the Louvre staring at one of Georges de La Tour’s moody, chiaroscuro paintings of Magdalene with a candle flame, and felt his flesh prickle.

“I’m from China, I grew up with a Communist education, but the painting touched me — it was able to transcend religion and culture. I wanted to know what was behind it, to find the soul of the artist,” he said.

Xin, who’s based in Paris, turned his search for that soul into a successful career: He’s made a name reinterpreting works by the Old Masters and others, with paintings based on Sandro Botticelli, Leonardo da Vinci, Jacques-Louis David and Claude Monet.

One of them, “Venus, after Botticelli” (2008), is a highlight of the exhibition “Botticelli Reimagined,” which opens at the Victoria & Albert Museum this Saturday, and runs through July 3. A version of the show first opened in Berlin last year at the Gemäldegalerie art museum.

It also includes more than 50 works by Botticelli himself and explores the variety of ways that artists and designers from the pre-Raphaelites to the present have responded to his oeuvre.

Martin Roth, director of the V&A, described Botticelli as a “design phenomenon” and said the new exhibition not only considers his legacy, but “shows how and why it has suffused into our collective visual memory.”

Xin’s painting focuses only on the head and shoulders of Venus in Botticelli’s 1486 work “The Birth of Venus.” In his version, her hair is black and flowing, and her eyes are Asian.

The museum describes Xin’s work as combining Western and Eastern elements to stress how the observer’s perception of artistic value is determined by his or her cultural context.

Xin, who grew up in the Gobi desert on the border of Afghanistan in the Sixties and Seventies, said his artistic horizons were narrow, and his passion for European art came partly from deprivation.

“It was impossible to see European art, and there is no tradition of oil painting. In China the art consists of ink on rice paper,” said Xin over coffee a few days before the opening.

He learned to paint by copying political posters at the time of the Cultural Revolution, and eventually went to study at Royal Melbourne Institute of Technology in Australia, and later settled in Paris.

Copying the Old Masters was a natural next step: “I was going back to the classical way of learning: Masters studied masters. You would copy, learn and then develop your own personality.”

The artist will be back in London at the end of May for a show with Luxury Living, the company that produces the Fendi Casa collections. For that show, called “Metamorphoses,” Xin has taken copies of classical works — such as “The Last Supper” — and painted his version of events over them.

Xin said his art is a direct reflection of a personal vision of China, a China that has nothing to do with being a superpower or big money. “I paint the China I feel inside,” he said.