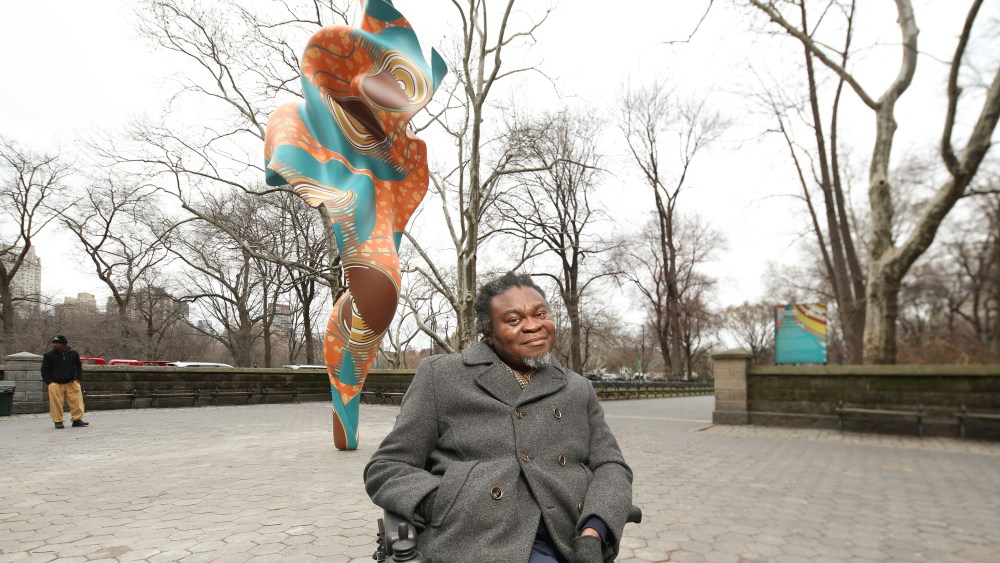 The London-based artist was in New York this week for the unveiling of his latest public artwork, his first in New York City. Located in the middle of Doris C. Freedman plaza at the southeast entrance to Central Park, his tall and bright “Wind Sculpture” was placed in collaboration with the Public Art Fund, which oversees the rotating public works in the area.

“The Public Art Fund has a mission to present the work of artists who are leading the conversation and the direction in contemporary art internationally,” says director of Public Art Fund Nicholas Baume, who joined Shonibare for the art’s public unveiling this week. “We of course are fundamentally committed to freedom of expression, artistic freedom, and the belief that artists should have a platform as a part of a dynamic, civic culture, and that public art is a vital way to do that.”

Shonibare’s work intrinsically explores global migration. The “Wind Sculpture” series, painted in the style of African textiles and inspired by a sail blowing in the wind, evolved out of his previous sculpture in Trafalgar Square, “Nelson’s Ship in a Bottle,” and just as the name suggests, the sculpture is a giant bottle with a ship inside, sails fashioned from African textiles.

And like many items attributed to certain cultures, the origin of the African textiles is not, in fact, Africa; the fabrics were Indonesian, produced by the Dutch and sold in North Africa, where they became popular.

“I decided to use fabrics in my work to explore issues around identity….as they related to my own Nigerian-British background,” says Shonibare.

“A lot of migrants, particularly about a hundred years ago at least, most people traveled by sea. So the sails are a very symbolic thing. And the wind was usually part of the process of traveling by boat,” he continues. “New York is a migrant city…not just in the United States, Europe as well, there’s a particular climate that’s not very generous toward immigrants. But actually most of the talent we have within our society are immigrants, particularly in the United States. In a way this work as also a kind of celebration and a tribute as well to migrants.”

The colorful orange and teal sculpture stands 7 meters tall, fabricated from a mold using fiberglass. A metal structure, running through the center of the pieces, ensures that it doesn’t topple over in the wind. The finished piece was painted by hand using stencils. It’s the first of a second series of “Wind Sculptures,” representing an increase in size and complexity in the sculpture’s folds, modeled using a 3-D printer.

Standing at the intersection across from the Plaza Hotel and Fifth Avenue — just several blocks from Trump Tower — the sculpture feels somewhat defiant to the current political rhetoric toward immigrants.

“Donald Trump was talking about building a wall. And of course, I’m aware of all of those things and I hate all of those things. So as an artist, you’re responding to the issues happening all around you,” he says. “Donald Trump has raised a lot of issues about immigration, and he has not been particularly friendly, particularly the issue of Dreamers.