Yvonne Strahovski stars in ABC’s “The Astronauts Wives Club,” based on the book of the same name — essentially Tom Wolfe’s “The Right Stuff” from the female perspective. 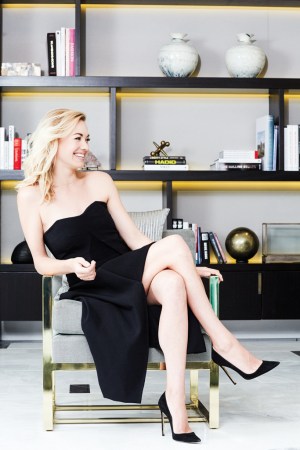 There are variations, but it’s a familiar trope.

“Honey, I’m home!” the well-to-do breadwinner says as he enters the house, a practical ranch, and hangs up his coat and hat.

“Dinner’s ready! Come inside kids!” The smiling wife — a pin-up-worthy looker and vacuum enthusiast — pulls a steaming meatloaf out of the oven, her hair perfect, her makeup expertly applied and her immaculate swing dress accessorized with an apron and heels.

Ah, the Golden Age: the oft referenced (and romanticized) era of the American dream when all was swell.

Yvonne Strahovski, coiffed and in pearls, is all too convincing as the model wife in ABC’s “The Astronauts Wives Club.” The show, premiering June 18, is based on the book of the same name — essentially Tom Wolfe’s “The Right Stuff” from the female perspective. It tells the tale of the seven women married to the astronauts of the Mercury Space Program in the early Sixties, America’s first human spaceflight initiative.

“The book is really a collection of anecdotes, stories, interviews and tidbits of their experiences together and as individuals,” Strahovski says. “It’s about these women who are under circumstances that no one had ever been under before.”

The show opens in spring 1961, the advent of the Space Race. Russia has just sent the first human to outer space and the pressure is on for the U.S. to settle the score. The Cold War, one fought via press and propaganda, is heating up and the good-ole boys are going to show the Russians who’s boss. Or at least that’s the perception NASA pushed onto the American public.

“The show has this backdrop — this political climate,” Strahovski says. “It was such a transformative time in America.”

In an effort to control the message, NASA enlisted Life magazine, which bought the rights to the couples’ “personal stories” to the tune of $500,000 when the men were recruited in 1959. The magazine’s reporters and photographers were given exclusive access to the wives and their husbands, paying each couple $24,000 a year for the three-year project Mercury was set to run. Implicit in that exchange was painting the right picture — of the heroic American astronaut and his consummately supportive wife, an image constructed and diligently maintained by NASA.

“There were a lot of requirements put on them by NASA,” Strahovski says. “They were required to cook their husbands a particular breakfast meal every morning. They were told the husband shouldn’t have to worry about anything when he comes home. There were a lot of intricate, little details that went into the facade they were trying to present. NASA gave all the wives a car, a typical sort of family vehicle. They suggested completing the family with a dog. They had to be poised and present this ideal picture of family to America.”

But behind the shiny veneer is fodder for great television: cheating husbands, competitive wives and the Swinging Sixties. These ordinary women were turned into instant celebrities long before there was reality TV stardom and Instagram fame. Needless to say, they weren’t exactly image-savvy or media-trained. “It’s not like they could go to a class and learn about how to conduct themselves in public while they’re being scrutinized or how to be interviewed,” Strahovski says. “It’s something these women had to learn on the fly.”

She can relate. The Australian actress’ career took off almost immediately after drama school, when she landed the role of spy superbabe Sarah Walker on “Chuck.” “I didn’t realize that at some point I would start getting fan mail,” she laughs. “And when that happened, it was shocking to me. I was like, ‘Oh, of course. This is something that’s actually reaching the public.’”

Strahovski has had a string of successful TV runs. Fanboys will remember drooling over her in “Dexter,” and “24,” but she’s flexing a different muscle with her “Astronauts Wives” role. Strahovski plays Rene Carpenter, the first wife of Scott Carpenter, the second American to orbit the Earth after John Glenn (the couple divorced in 1972 and he would marry three more times). Rene’s not exactly fond of NASA’s rules. “In the book, she’s described as the ‘rebel,’” Strahovski says. That’s established in the first episode when the seven women are gathered for their first Life magazine photo shoot. NASA sent a memo asking each lady to wear a plain, pastel-hued shirtdress. Rene shows up in a loud floral-print Dior. “She wanted to have her own voice and express herself. She didn’t want to be this sheepish little Stepford Wife,” Strahovski says.

Rene was rumored to be John F. Kennedy’s favorite astro-wife — she was slender and platinum blonde — and was cast in the press as the prom queen of the group. She ended up using her fame as a platform, going on to become a talk-show host and a vocal feminist. “Everything she achieved in her time, it’s incredible,” Strahovski says. “Her journey is quite extraordinary.”