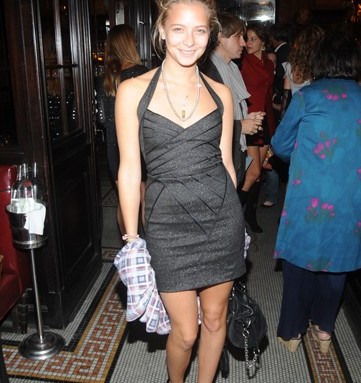 Zac Posen’s postshow affair always feels a little like a high school graduation party, filled with guests who have known the designer since he was about four years old (not that this is that long ago) and who are full of stories. This season, Lola Schnabel was the first to share during the dinner at Balthazar. She went to school with Posen at St. Ann’s in Brooklyn. “In English,” she said, “we read Milton’s ‘Paradise Lost,’ and he made this costume with horns, and I came into class with him under my skirt and gave birth to him on the desk. Then he raped me.” This was instead of writing an essay.

Bernadette Peters met Posen just shortly after he began designing his own line. “He’d gone to see me in ‘Sunday in the Park With George’ when he was four and memorized the entire thing,” she said. “Then he did my dress when I hosted the Tonys. At the time, he was still showing in his mother’s living room.”

Around 11 p.m., as guests including Claire Danes, Steven Klein, Coco Rocha and Daphne Guinness were finishing their meal, a man in his fifties named Paul MacDermot got up on a table in the center of the restaurant and began singing standards for the crowd. “I’ve known Zachary since he was 12,” he said afterward. “I took him around Seventh Avenue to meet people. Then, for his first opening eight years ago, he borrowed my Bunny Rogers tailcoat and lost it. And I’m here tonight because they promised me a new one.”

Over at the AMC Loews on 19th Street, a gaggle of girls gathered for a screening of “The Women” hosted by the Cinema Society and Nars, including co-stars Meg Ryan, Jada Pinkett-Smith, Debi Mazar, Bette Midler and Eva Mendes. “It was great to be able to work with a group of women, because most of the time you are usually the only woman on the set,” said Pinkett-Smith. “Which has its perks too,” she giggled.

“It was a blast to hang out in the makeup trailer and talk politics and talk about our kids,” added Ryan, who plays a fashion designer (her character’s collection was done in real life by Narciso Rodriguez). “He was cool,” said Ryan of her fashion double. “He sent the clothes, he sent the models. We didn’t have any money to make this movie.”

The after party at the Gramercy Park Hotel was packed with other ladies who came to show their support, including Barbara Walters, Julia Stiles and Kelly Klein. But the center of attention was a man — Mick Jagger, who produced the film. The rock star came with girlfriend L’Wren Scott, and was instantly surrounded by gawkers and well-wishers.

“I’m a big fan,” gushed Lauren Bush as she introduced herself. “I sleep in your T-shirt almost every night.”