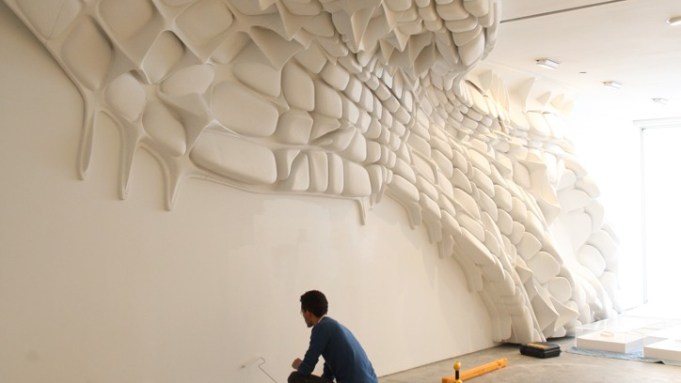 NEW YORK — Talk about striking while the proverbial iron is hot.

Less than two weeks after her Chanel Mobile Art pavilion conspicuously landed in Central Park like a spaceship, Zaha Hadid’s series of bold organic installations is the subject of a two-venue exhibition opening Saturday.

“It’s a very nice kind of coincidence,” Hadid said on Thursday. “Most of the [works] are models of projects we did. This time we did them to the scale of the room. They occupy the room.”

That might be a bit of an understatement. At the Sonnabend Gallery at 536 West 22nd Street, where several works are on view through Dec. 13, the 18 fiberglass pieces hanging from the ceiling that comprise “Stalactites” don’t so much occupy the room as they take it over. A special drop-ceiling had to be built to accommodate the sculpture, which suggests the fluidity of peaks and valleys.

The exhibition was curated by Kenny Schachter, a London gallerist, who has previously shown Hadid’s work. When it became clear that eight massive sculptures wouldn’t fit in the Sonnabend Gallery, Schachter secured a warehouse around the corner at 169 10th Avenue as an annex.

Hadid, an Iraqi-born, London-based architect, became the first woman to win the coveted Pritzker Prize in 2004. She spent more than a year preparing the show, which also features 10 paintings and paper reliefs.

“Each piece has a starting off point as a building, then gets extracted and extrapolated as architecture art,” Schachter said. “All of the different projects that inspired this show have different scales.”

Hadid lives to see her designs become reality, but like many celebrated architects, some of her more fearless work remains conceptual. “She loves building,” Schachter said. “But the design component of her practice is exceedingly significant to her.”

Hadid designed the kitchen of the future for Italian manufacturer Ernestomeda and shoes for Brazilian footwear brand Melissa. The architect has also created vases, bowls, tables and seating. Her furniture has commanded high prices. An auction record for Hadid’s work was set at Phillips de Pury & Co. in December 2006 when a cement outdoor piece sold for $600,000.

A version of “Kloris,” which was shown at Sotheby’s modern and contemporary sculpture exhibition at Chatsworth House in Derbyshire, England, can be seen at the 10th Avenue exhibition space. The 10 fiberglass and steel elements of the piece reference the abstract forms of a flower.

Another installation, “Relief 2: Public” comes from the plan for a performing arts center in Abu Dhabi whose amoebalike design was inspired by plants. The white amorphic piece has areas that can be used as tables and benches. “Kartel — Pendik Masterplan,” a topographical treatment, is based on a winning competition proposal for a new city center on the east bank of Istanbul, with reptilian tiles climbing up the wall and ceiling at Sonnabend.

Schachter, who commissioned from Hadid a three-wheeled car called the Z car, and its subsequent four-wheel model, as well as the design of a gallery in London’s Hoxton Square, said he’s optimistic that the building will be done in two years.