After performing at the Billboard Hot 100 Fest, Zella Day talks The White Stripes, music festivals and her music video. 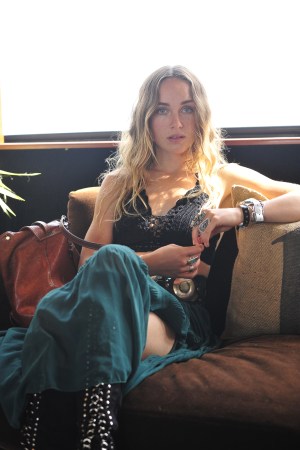 Zella Day has come far from gigs in her family’s coffee shop in Pinetop, Ariz. The 20-year-old singer and songwriter released her full-length debut “Kicker” earlier this summer and is touring the country to promote it. On Sunday, she stopped at the Jones Beach Theater for the Billboard Hot 100 Festival and talked about her longtime fascination with the White Stripes and Stevie Nicks, playing music festivals and the controversy over her video “High.”

WWD: How did you get your start in music?

Zella Day: When I was about nine years old, I started playing in my parents’ coffee shop, called Mor Mor Coffee House, in Pinetop, Ariz. I moved to L.A. about three years ago but I’ve gone back and visited. My family no longer lives there — my mom is in Long Beach and my dad is in Portland — but I’ve been back to visit friends.

WWD: You’ve gone from playing in your family’s coffee shop to doing large festivals like Lollapalooza and the Billboard Hot 100 Festival. How does each performance differ?

Z.D.: [Jones Beach] was OK — my ear piece blew out and so I couldn’t hear anything, but it is what it is. Lollapalooza was incredible. There were a lot of people who showed up to the stage, way more than I expected. Depending on who is in front of you — the audience just emits such a different energy. I feed off that, and it affects my performance, for better or for worse.

WWD: Your first release was a cover of The White Stripes’ “Seven Nation Army” in 2012. Are you a big Jack White fan?

Z.D.: The White Stripes were really inspiring to me growing up. All their records are amazing. The first talent show I ever played, I did “I Can Tell We Are Going To Be Friends.” So they’ve been around for me for awhile. “Seven Nation Army” was kind of a happy accident. I was in the studio with one of my best friends and my producer heard us messing around with “Seven Nation Army” and was like, “You need to get in the live room right now because that is incredible.” And so the take that you hear is like the second one we did. It was very random, and then all of a sudden it was on all the blogs and it was number one on “Hype Machine” and I was still living in Arizona and didn’t even know what “Hype Machine” was.

WWD: What other female musicians do you admire?

Z.D.: I would like to see Ryn Weaver and Tori Kelly here, because they’re on my stage. Otherwise I think Nikki Lane is incredible, and Natalie Bergman of Wild Belle is amazing. I also love Stevie Nicks and Janis Joplin.

WWD: The video for your song “High” was held back from release by your label — what happened?

Z.D.: The best I can put it is that sometimes art and commerce don’t really mix together. You know, I created this video from just pure authentic intention, and the label just had a different opinion on it. At the end of the day I could’ve gone their way and just cut out certain scenes and released it, but if I had released it that way it wouldn’t have been the video I wanted to release. So I didn’t release it. And it has nothing to do with if they’re a bad label or not; they’re a great label and they’re the reason I’m on this tour right now. They’re funding this whole thing. But I stand by my art and my vision and what I really believe in, and I’m only going to explore more, the further I get in my career and the deeper I go into my mind and my imagination. And so I just felt like it was a good precedent to stand my ground.

WWD: How have your fans reacted?

Z.D.: Everybody was really angry. But there is a chance that I’ll start projecting it at my live shows. Somehow I need to get it out there. At the end of the day, music videos are amazing and really fun to watch, but the most important thing to me right now is definitely touring and playing live shows and connecting with my audience, so the music videos are important and I wish I could’ve released this video the way I intended to but it’s music first. Music videos are not my top priority. But it is important, so I’m going to find a way to release the video.