The actress hosted an in-store cocktail celebrating the latest collection designed for the brand.

By Sandra Salibian and Martino Carrera on October 4, 2019

MILAN — Leave it to Zendaya to volume up an ordinary, post-fashion-week-frenzy Thursday evening by bringing Seventies vibes in Milan.

The actress appeared at a cocktail event staged in the city’s Tommy Hilfiger flagship to celebrate the launch of the latest collection she codeveloped with the American designer, which was first presented at the Apollo Theater during New York Fashion Week last month.

Evoking the upbeat mood of the TommyNow fashion show and theme of the line, hits such as Diana Ross’ “Upside Down” and Stevie Wonder’s “I Wish” were performed by a band to welcome guests at the event.

Pairing her signature curly tresses and smile with a striped, long-sleeve knit dress and knee-high mauve boots pulled from the collection, Zendaya greeted the many fans who had been queuing outside the location for an hour and hosted a brief panel to talk about the partnership with Hilfiger.

“This has been a passion project of mine,” she said. “I actually got a call from Tommy [Hilfiger] himself almost two years ago and he basically said that whatever creatively I wanted to do, he would support it and be behind it. If I wanted like to pick the font or the wrapping paper, [he said] every detail I wanted to be in I could — and I didn’t believe him,” she recalled with a laugh.

Starting from themes of inclusion, diversity and empowerment, the collaboration launched with a spring 2019 collection presented in Paris that was inspired by Seventies disco.

“The Seventies glamour has always been a huge reference for me in general, whether it be Mick Jagger, Diana Ross, Donna Summer and a lot of iconic women of that time,” said Zendaya. “With the first season we kind of played with tailoring a little bit, but then the second season, I really wanted to go heavily into suits and structured tailoring because I love suits. I love the way they make me feel and how they look on my body and that feeling that I give myself when I wear a well-tailored outfit, I wanted other people to feel that, too,” she added. 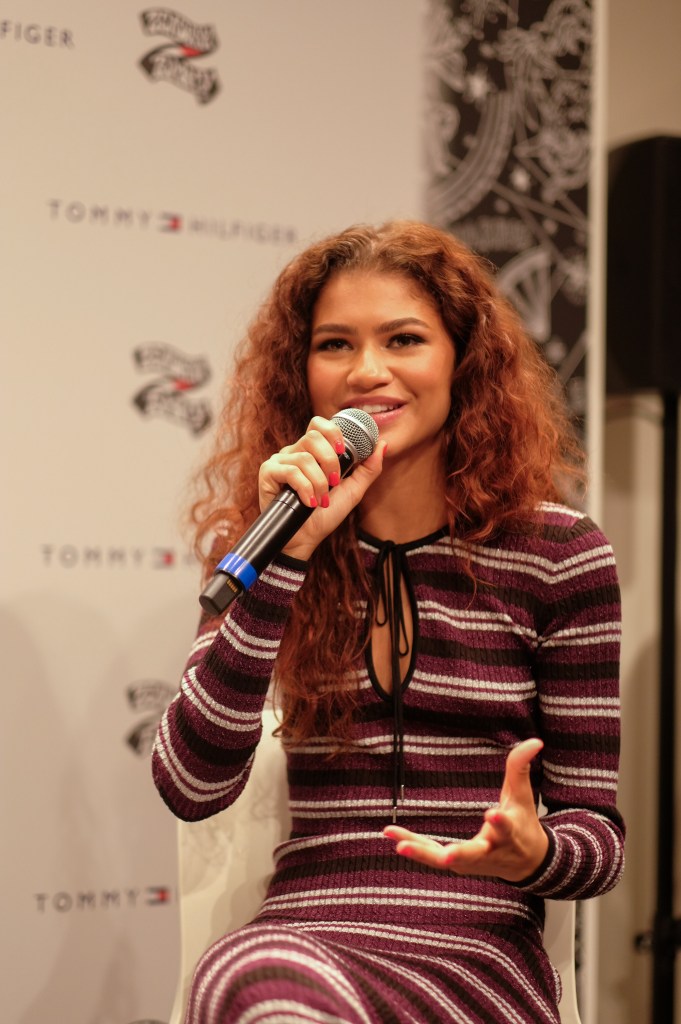 A crowd of local influencers — helmed by Chiara Ferragni’s sister Valentina — and customers who attended the event already sported some of the key pieces, mostly coming in the black-and-white TZH monogram pattern that proved to be a favorite.

“It’s so beautiful to see how everybody styles and wears [the collection] in their own way. It’s exciting for me when I see all of you wearing the clothes and how you choose to wear them and the life that you give to the clothes makes me so excited because you think of things that even I didn’t think to put together,” said the actress to the crowd.

In sync with her attitude of empowering customers of the brand and her fans, Zendaya also talked about the responsibility she feels toward younger generations of women to be a role model.

Asked about her icons, she pointed to “the women in my life: my grandmothers, my mom, my older sisters, my little nieces even, all because they walk through life in their own ways and I think they just lead by example.”

“Even though they’re younger than me, [my little nieces] give me so much inspiration just by existing.…Knowing they watch me inspires me to just do better and work harder,” she explained, recalling how she also “looked up to my older sister so much and I continue to look up to her and she never really had a full awareness of it.”

With her most recent role in HBO’s hit series “Euphoria,” which just launched in Italy, her nieces are not the only ones looking up to her. To the many young fans who rushed to meet her, she suggested “just to be kind to yourself, give yourself time and space to grow and be patient with yourself, with your dreams and ideas.”

“I am one of those people who want everything to happen, and I want them to happen now, right away.…I want to nail it every time but I think it’s important to just be patient with yourself and love yourself through all your ups and downs,” she said, underscoring that bad experiences help “to know how to do better.” 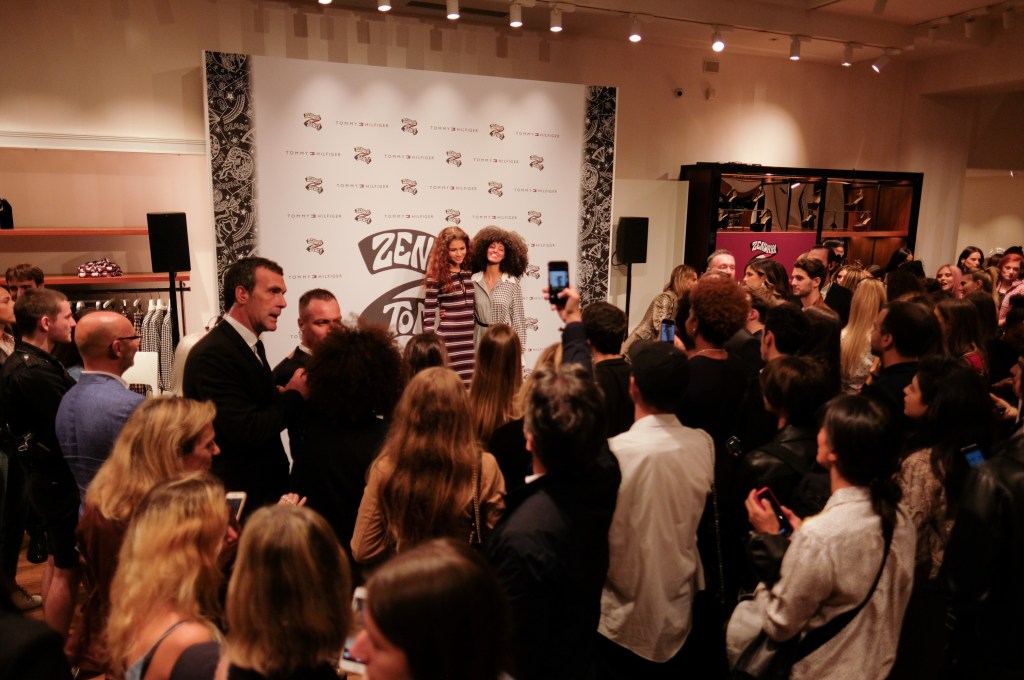 After Zendaya’s brief panel and the meet-and-greet with guests, the event continued with drinks and canapés al fresco in the courtyard of the location, where the band continued to provide the funky entertainment under the chilly Milanese weather.

“This is my first time in Milan…it’s so exciting and absolutely beautiful,” said Zendaya, who spent some time sightseeing around the city even though she wished to have more time to discover what else it offers. “But I will be back, I’m sure, I know this is not going to be the last time I’m here. I love fashion and this is one of the fashion capitals of the world so I will be back,” she concluded.