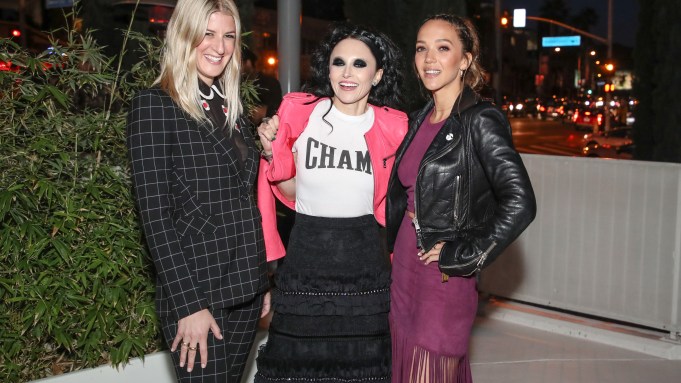 “I’ve never had an opening with a smoke machine before,” Zoe Buckman told the crowd standing before her Tuesday night.

The group had assembled to toast Buckman’s latest piece of art — hard to miss at 43 feet tall and nine feet wide. Its sheer size is undeniable on the Sunset Strip. That the installation is the glowing neon outline of a uterus wearing boxing gloves is just the starting point of a conversation Buckman hopes to stoke with her piece titled “Champ.”

The installation, presented by Art Production Fund and The Standard hotel, along with the help of Alice + Olivia chief executive and creative director Stacey Bendet, gleams at the corner of Sunset Boulevard and Sweetzer Avenue and will be there for the next year. It’s Buckman’s first public installation.

“I made the piece when it was the run-up to the election and I was making work about the war on women and the fact that access to sexual health was being threatened and that there was a lot of statements circulating about rape and abortion and so I really wanted to make a work about this and try and create something empowering and at the same time I was learning how to box,” Buckman said. “And so it just felt really appropriate to bring boxing in and the world of combat that I was learning for my well-being into my studio practice.

“We have a lot to fight for but we are also naturally incredibly resilient and powerful and so it’s as much about what I want to be celebrated as what I want to challenge,” Buckman said of the installation. “My choice of bringing boxing in was also about trying to bring masculinity into the conversation.”

Once it was determined what the actual piece of work would be, The Standard stepped in to accept the installation at its property with the hotel’s area director of design Jenni Boelkens pointing out that “From a cultural perspective, this just adds to what we’re already bringing to our guests.”

The fund-raising element wasn’t necessarily as easy to stitch together.

“I think we were anticipating [challenges] just because it’s a more daring piece. It’s a provocative piece,” said Art Production Fund executive director Casey Fremont. “It takes someone like Stacey, who really believes in the artist and really believes in the work, to get behind it and that’s the kind of person we needed to take on a project like this. It’s an important message.”

Bendet was sold after the initial meeting and went on to also create T-shirts, totes and sweatshirts around the work, now being sold in her stores as means of furthering the conversation about female empowerment. The pieces are priced from $95 to $275.

“Alice + Olivia, we’re such vocal supporters and proponents of everything regarding female empowerment, feminism. It’s what our brand is about. My office is 400 women, a brand that’s designed by women for women,” Bendet said of her decision to support the project. “To me, it was such a no brainer. How often in your life, your career do you have the opportunity to, A, help a friend whose an artist and, B, sponsor a 43-foot tall uterus on Sunset Boulevard?”